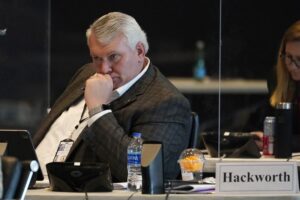 The first draft maps had not been drawn when the first lawsuit challenging Virginia’s redistricting process was filed.

Sen. Travis Hackworth. R-Tazewell, along with several other plaintiffs, is challenging 2020 Virginia legislation that required, for redistricting purposes, prison and jail inmates to be allocated to the population counts of the locality of their last known address, rather than to the localities in which the prisons and jails in which they were incarcerated, as had been the practice in past years. (That legislation was the subject of an earlier BR post.)

Because most prisons are located in rural areas, by shifting their populations to other areas of the state for purposes of the population totals used in redistricting, the lawsuit claims that the change will politically weaken rural areas.

So far, it seems that the Supreme Court has not taken any action on the petition. The Commission is required to submit its proposed House and District redistricting plans to the General Assembly by October 10. If the Supreme Court grants the petition, the population data used by the Commission would have to be readjusted. Depending on how far along in its deliberations the Commission was at the time of such a judicial decision, it may have to make significant changes to any plans underway at the time.

Rebecca Green, a law professor at the College of William and Mary, commented that the lawsuit is “a long shot.”  I would agree. Because the legislation applies to any circumstances in which redistricting takes place, and was enacted before the establishment of the Commission was approved by referendum, it would have been applicable even if the constitutional amendment had been defeated.

Regardless of the outcome of the court case, the legislation has the potential to significantly affect several areas of the state and the legislators representing those areas. The following analysis is based on the April 2020 average daily population (ADP) of state prisons, rather than the April 1 population required by the statue, because the ADP data is more readily accessible on the DOC website. Because DOC had stopped bringing inmates in from jails due to the pandemic, the ADP number is probably lower than the April 1 population.

The April 2020 ADP of DOC correctional facilities was 29,065. For redistricting purposes, those inmates were “spread” all over the state. That process increased the population of the precincts to which they were allotted. Maps prepared by the Virginia Public Access Project graphically show this spreading effect.

It is clear from the VPAP maps that the metropolitan areas of Hampton Roads, Richmond, and Northern Virginia will gain population from this allocation of inmates. However, the map under the tab “Prisoners’ home address” showing large blue blobs in those areas is somewhat misleading because the VPAP data includes jail inmates who were already housed in those areas.

It is important to put this data into some perspective. Based on Virginia’s total population of 8.6 million, the population size of the “ideal” Senate district would be 215,785; for the “ideal” House seat, it would be 86,313. Therefore, the entire prison population would be sufficient to constitute only one-third of a House district and less than 15% of a Senate district. Because that population of 29,065 inmates was spread over the Commonwealth, the effect of the additional population from inmates in most places would be marginal, at best. In the urban areas which received the biggest benefit from the reallocation, there were not sufficient inmates to enable those areas to gain seats. Rather, the effect is likely to be more compact districts in the urban core with the districts on the suburban edges having to be stretched further into the nearby rural areas in order to have the target population for a district. (Depending on the specific circumstances, that could benefit the rural areas.)

The two areas that will be most negatively affected by this shifting of prison population will be Southside and Southwest Virginia. Bear in mind that these areas lost population generally between census counts and it is anticipated that a House seat will be shifted from each area and the Senators representing those areas will have geographically larger districts. The “loss” of prison population will just be piled on top of actual census losses.

The April 2020 ADP of correctional facilities in Southside was 14,288; in Southwest Virginia, 5,714. The actual decrease in population resulting from the reallocation of prisoners will be less because, as the VPAP map shows, some prisoners have those areas as their last addresses. However, there will be a significant net loss.

In the Southwest Virginia area, Sen. Hackworth and Del. Terry Kilgore, R-Scott, will be the legislators most affected. The ADP of prisons located in the counties now represented by Sen. Hackworth was 4,803. That is about 2.2% of the population that will be needed for a Senate district. For Del. Kilgore, the loss of 2,007 inmates would amount to 2.3% of the population needed for a House district. Of course, the net loss will not be as great, but in terms of redistricting, plus or minus 2.0% is the target deviation.

Southside Virginia would see 14,288 inmates reallocated, but the net effect is not known. The legislators most affected would be Democrats: Sen. Louis Lucas (Portsmouth) and Del. Roslyn Tyler (Southampton). Lucas could potentially lose up to 7,957 in the population of the counties she currently represents, or 3.7% of the number needed for a Senate district. Tyler also could lose up to 7,957, but that amount would constitute 9.2% of the number needed for an “ideal” House district. Again, these numbers are not the net loss from the reallocation.

In summary, Sen. Hackworth’s petition is partially correct. Population would be shifted from rural areas to urban and suburban areas. However, the effect would not be uniform across the state. As the VPAP maps show very well, many rural counties that currently have no inmates being counted in their borders would have inmates allocated to them and thereby increase their population counts. Any positive effects would be marginal in most areas. Finally, it is clear that two areas would experience significant net negative changes in population: a portion of Southwest Virginia represented by Republicans and a portion of Southside represented by Democrats.

This reallocation of prisoners is one of many moving parts of the redistricting process.

Author’s note: I will be posting periodic updates, summaries, and comments on the redistricting process being carried out by the Virginia Redistricting Commission. I will be doing it for two reasons: 1. The results will have a significant impact on politics and governance in the Commonwealth over the next ten years and deserves coverage and comment in BR and 2. I find it fascinating.