Redistricting: Fairness is in the Eye of the Partisan 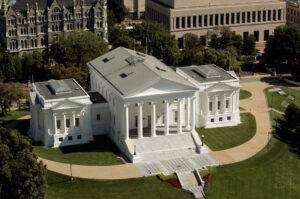 The Virginia Redistricting Commission has hit another wall.  This one, over Congressional districts, is good, old-fashioned partisan politics, dressed up as differing perceptions of fairness.

At last Thursday’s  (Oct. 14) meeting, the results were presented and discussed.  The Republican proposal for the Fifth District, anchored in Southside, instantly drew fire from Democrats. It had the advantage of being more compact than the current Fifth District, which stretches from the North Carolina line to close to the Maryland border. However, in making it more compact, the map drawers had to find more people, which they found in the western parts of Henrico County and in Chesterfield County. Del. Marcus Simon, D-Fairfax, did not hesitate to label this a “cracking” of the Democratic voting areas in the Richmond suburbs.

The Thursday meeting adjourned after lengthy discussion with a general agreement that the map drawers would put their respective pieces together into a single, composite map that the Commission could consider at the next meeting.

Del. Simon had grumbled about “Tom Davis’s map” some on Thursday. On Monday (Oct. 14), the issue exploded. To put this issue into context, any citizen is able to submit a map for the Commission’s consideration and the Commission encourages them to do so. Tom Davis, a retired Republican Congressman from Northern Virginia had done so. And his map was very similar to the map that the Republican map drawers had proposed for the Commission’s review.

After making some inquiries over the weekend, Simon revealed Monday that the National Republican Redistricting Trust had been behind the map submitted by Davis and, in fact, a representative of the Trust had submitted the map to the Commission on Davis’s behalf. Later, in an interview, Davis acknowledged that he had contacted the National Republican Redistricting Trust and asked them for help drawing a map.

Simon contended that it seemed there was collusion between the national Republican Party, Davis, and the Republican map drawers. That drew fire from the Republican members of the Commission with Sen. Bill Stanley, R-Martinsville, charging that “collusion” was a serious legal issue and that none of the elements of collusion were present. He suggested that Simon, who had opposed the constitutional amendment creating the Commission, had been put on the Commission to blow it up.

The Republican map drawer assured the Commission that his team had not communicated with any outside party, except to direct them, when asked, to the appropriate person in the Division of Legislative Services who could assist with submitting the map to the Commission. He explained that he had looked at Davis’s map along with other maps submitted by citizens, as the Commission had directed, but any semblance of their map to Davis’s map was a coincidence.

Simon backed off a little, saying that he would accept at face value the explanations offered. However, “Even if it was a relatively benign process, if it’s just a coincidence that the Republican map-drawer picked Tom Davis’s map to draw the three southwest districts, the result is the same.” Even on Thursday, he had announced that the Republican map was a nonstarter for him. On Monday, he said that was still the case, even more so.

The changes in the district boundaries result from  the loss of population in the Southwest and Southside and the gain in population in the Richmond area and Northern Virginia. The areas in the middle get pushed and pulled about to compensate for these population shifts.  The major changes are in the Fifth and Seventh Districts.

Under the Republican approach, the major casualty would be Rep. Abigail Spanberger (D).  She currently represents the Seventh District, which runs from the Richmond suburbs to Culpeper County. The Democrats in the Henrico and Chesterfield parts of the district offset the largely Republican rural areas of the district.  The map proposed by the Republican map drawer would put some of those Henrico and Chesterfield Democrats into the Fifth District, which is largely a Southside, rural, Republican district. It would put some other Henrico Democratic areas in the First District, which consists primarily of the rural Middle Peninsula and Northern Neck. Henrico County would be carved up among three districts. In summary, Spanberger would be left with a district bereft of the voters that constituted her main support.

Drawing a district to get rid of a Congressman is not unheard of. In the redistricting following the 1990 census, Democrats openly and gleefully gerrymandered Rep. George Allen’s Charlottesville home area into a district that also included Rep. Tom Bliley, a powerful long-time Republican Congressman who represented the Richmond area. (Allen retaliated by running for, and winning, the governorship a couple of years later.) The paradox is that Democrats were able to do that because they were the majority party in the legislature. Now, although Republicans are the minor party, they still have the ability to try to eliminate a Democratic member of Congress.

Both sets of lawyers/map drawers reported to the Commission, when asked, that, based on recent election history, the combined map included five districts that were clearly Democratic, five that were solidly Republican, and one that was a tossup.

There was a lot of discussion of what the goal should be. The terms “fairness” and “fair maps” were tossed around a lot. Some asserted the need for competitive districts. For a while, it seemed that the two sides were ignoring the actual Code language: “A map of districts shall not, when considered on a statewide basis, unduly favor or disfavor any political party.”

When they finally got around to the actual Code provisions, the Republican counsel stressed that the U.S. Supreme Court had ruled that redistricting maps did not have to be proportional. Furthermore, he contended that “unduly” does not mean proportionality. If the General Assembly had meant that districts should be drawn in a proportional manner, it would have said so.

The Democratic counsel pointed to the Virginia language, contending that “unduly” allowed for proportionality. He argued that, when a majority of the voters in a state had expressed a preference for one party in recent years, then the redistricting map should reflect that majority. The implication was that, if that majority was not reflected, the map would be unduly disfavoring that party.

In summary, the argument over “fairness” boiled down to one of two positions:

Because there were not a sufficient number of members physically present at the Monday meeting to constitute a quorum, the Commission could not take any votes or any official action.

At the Wednesday (Oct. 20) meeting, the meltdown was complete. Many of the same arguments broached at the previous meeting were repeated. Contending that giving Republicans five safe districts would not reflect the changing demographics of the state and recent voting patterns, Simon moved for adoption of an alternative map that he had submitted to the Commission. That map was adjudged to have five solid Democratic districts, four solid Republican districts, and two competitive districts. The motion failed on a 8-8 party-line vote. Sen. McDougle, R-Hanover, then offered a motion to approve the combined map, based on the Republican drawing of the Southwest and Southside districts, that was felt to give each party five safe seats, with one competitive seat. That motion failed, also on a 8-8 party-line vote.

Unspoken, but doubtlessly on the minds of most members of the Commission, were the significant national implications of these decisions. With Democrats clinging to a tiny margin in the House of Representatives, any decision that could result in Republicans picking up even one seat in Virginia could have major ramifications following next year’s Congressional elections.

Next Monday, October 25, is the deadline for the Commission to submit a Congressional map to the General Assembly for approval. If it does not meet that deadline, as now seems likely, a 14-day extension automatically kicks in. If it does not agree on a map within that extended period, the issue goes to the Virginia Supreme Court. The “penalty” for using the 14-day extension is that the Commission would not get another chance if the General Assembly rejected any map it produced.

Perhaps due to its disappointment in having to give up on the maps for the state legislature, and getting some criticism for doing so, the Commission finally agreed that it was not ready to give up entirely on the Congressional map. Before they adjourned, the members agreed to reconvene if the co-chairs, after finding that Republican and Democratic map-drawers had made progress toward a compromise, jointly called them back.

Republican Commissioner Jose Feliciano, Jr. said, “I think we owe it to the commonwealth to fight until the end.” However, Greta Harris, the Democratic co-chair, lamented, “But at some point or another, banging your head against the wall and expecting something good to come out of it is just not worth it.”

I feel badly for all the well-intentioned folks who labored for many years to create an independent redistricting commission. When the Republicans pivoted after the 2017 elections and drafted and passed a constitutional amendment that had partisan interests baked in, those advocates were stuck. I don’t know whether they continued to push for the amendment because they were naive enough that they did not recognize the potential for partisan gridlock, hoped that politicians’ “higher angels” would prevail, or because, in good conscience, they felt they could not back away at that point. Whatever the case, they must be sorely disappointed at the results.