Profanity Proliferates on the Lawn 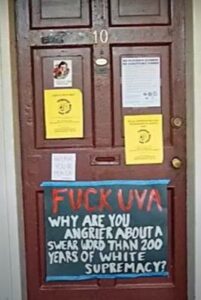 After a resident of the Lawn at the University of Virginia posted signage saying, “Fuck UVa,” outraged alumni raised a stink in a series of letters to UVa President Jim Ryan. For the time being, said Ryan, Lawn residents’ free speech is protected by the First Amendment, but the administration is working on a longer-term solution. In the meantime, at least one other Lawn resident has joined the first in using the same profanity to express his/her/their/zir/its antipathy to the university (in the sign seen at left).

Rob Schilling, a talk radio host at WINA radio in Charlottesville, photographed that sign, as well as several others displayed on Lawn doors, and displayed them on a videocast. (No direct link, but you can find the videocast on The Schilling Show blog.) 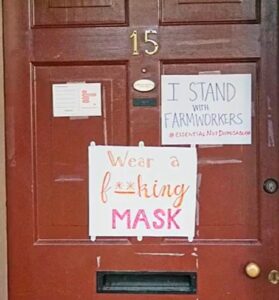 The author of these signs had the decency to use asterisks in urging passersby to “wear a f**king mask.” 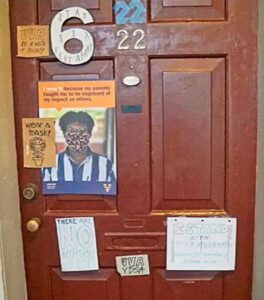 The Lawn resident here refrained from the use of profanity, but made clear his animus to UVa, declaring that “UVa is a waste of time.” (If the university honored the student by awarding him with a prestigious residence on the Lawn and he feels only contempt in return, perhaps UVa is a waste of time! For sure, something is very, very wrong there.)

The Schilling Show is the only other media outlet in Virginia who is consistently following the UVa controversy. Rob makes his commentary and interviews (including this one with Bert Ellis, the alumnus who sparked the alumni revolt) available on his blog. Check it out.