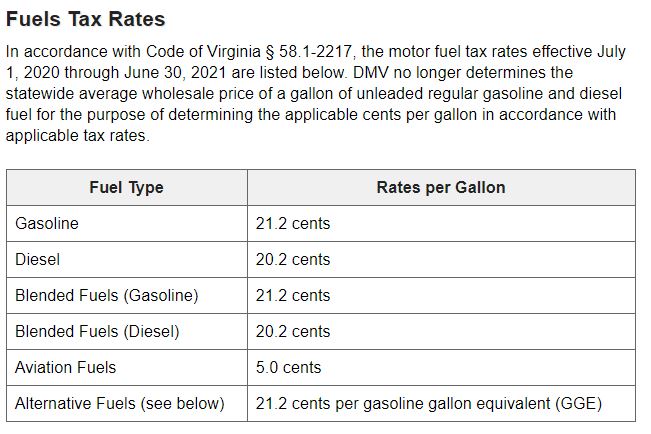 DMV Table.  Missing is the additional 7.6 cents per gallon collected in every county and city as a “wholesale tax” but still passed on to consumers. Oversight?

The Division of Motor Vehicles website is not honestly reporting fuel taxes in Virginia on that table above. This cannot be an oversight.

Virginia’s existing and potential future fuel taxes were at the center of a recent post about the Transportation and Climate Initiative, and to dispute the data in the post somebody logically went to the DMV’s website. I reported the current statewide tax on gasoline as 28.8 cents per gallon, but DMV lists it as 21.2 cents per gallon. My veracity was then questioned, citing the webpage.

Now the misleading DMV table is the more important question. It is not the only example of DMV sleight of hand I’ve recently noticed. More on that other one later. Right now, the question is, why is DMV ignoring the 7.6-cent-per-gallon regional tax, now collected in every Virginia locality? Why report that people pay 21.2 cents per gallon, when it is really 28.8 cents? Will the misleading website provide cover for legislators who want to deny the tax increase? 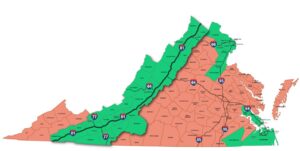 The green areas paid the regional/wholesale gas and diesel tax before July 1, and the rest of the state started paying it July 1. It is now really a statewide tax. Click for larger view.

Before this July, the regional tax was added on only in Northern Virginia, Hampton Roads and along the Interstate 81 corridor.  The revenue was dedicated to those regions. The 2020 General Assembly expanded it to every corner of the state, effective July 1.

First came House Bill 1541, creating a Central Virginia Transportation Authority comparable to those already in place for the three previously named regions. Both the bill itself and the fiscal impact statement are clear that various new taxes were being added, including 7.6 cents per gallon on gasoline and 7.7 cents per gallon on diesel.

Then came the omnibus transportation funding bill, House Bill 1414. It raised the basic tax 10 cents over two years, but it also expanded the additional regional taxes to every locality not yet reached by them. The additional taxes were “regional” no more, but their revenue is still committed to the transportation districts where it is collected. Again, the outcome is clearly stated in the fiscal impact statement.

The final outcome is also reported in this Commonwealth Transportation Board slide presentation on the actions of the 2020 General Assembly. The American Petroleum Institute’s data has been updated to reflect the July 1 changes, and it has the best detailed breakdown of the taxes and fees.

If the DMV did not want to lump the two taxes into the same category on that published table, it could have added a separate line for regional dedicated fuel taxes, or call it a “wholesale tax,” the designation used in House Bill 1414. Either way, the real state tax on a gallon of gasoline is now 28.8 cents, not 21.2 cents. To leave that second tax off that listing is deceptive.

Actually, there is DMV website reference to the “wholesale tax,” but nowhere in that entry does the amount of tax – 7.6 cents for gasoline and 7.7 cents for diesel – get reported. You have to scroll to the end to find a linked announcement, where the tax amounts are finally listed. It is well buried.

The other deception involves another aspect of House Bill 1414, the creation of a new “highway user fee.” All will recall the fanfare around the decision to lower the annual registration fee on cars and small trucks, with the politicians all taking a bow. Less attention was given to the other side of the coin, a new highway user fee. It is also paid at the time of registration and is directly tied to the fuel efficiency of your vehicle, rising higher and higher as the official MPG rating increases.

In the press announcements, the “average” highway user fee was put at $19. So, if your vehicle is on the efficient list (rated at 23.7 MPG or better), the amount you pay at registration is actually higher than before, not lower. Subtract $10 but add $19. With a very efficient vehicle, you could pay a substantially higher registration fee. Call it a green penalty.

There is no calculator I could find where you plug in your make and model and see what the highway user fee will be. Nor would DMV provide a list of examples of the MPG ratings of popular models, and I did ask. You’ll find out when you apply. Only electric vehicles have a publicly available highway user fee of $88.20, also a substantial increase over the previous $64.

The highway user fee was not on the list of all the new taxes approved by the 2020 General Assembly. It is now added.

This is an interim step toward the kind of vehicle-miles-traveled highway funding method that many favor, and that’s fine. The issue is not whether the highway user fee is a good or bad idea. The issue is whether the state is being honest and open about it. Let people know legislators approved it and they must pay it. Admit  many Virginians will pay more than before. Don’t be making things hard to find and calculate – whether it is a highway user fee or the motor fuels tax.