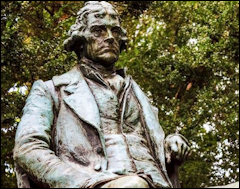 “We hold these truths to be self-evident, that all men are created equal, that they are endowed by their Creator with certain unalienable rights, that among these are Life, Liberty and the pursuit of Happiness.”

With those immortal words in the Declaration of Independence, Thomas Jefferson declared the freedoms and liberties of Englishmen to be universal, applying to all people. As a slave holder, he failed to live up to the ideals he espoused. But his words inspired his generation to fight for independence, and inspired subsequent generations, who nearly succeeded in abolishing slavery in Virginia in 1831-82, fought a Civil War to end slavery, and fought and won Civil Rights for all. Without Jefferson’s words, without the principles he articulated and defended, those who now revile him would not enjoy the liberties they have today.

Showing an astonishing lack of historical perspective, the People’s Republic of Charlottesville (P.R.C.) City Council voted 4-1 Monday to scrap the decades-old April 13 holiday honoring the city’s most famous resident and, instead, will recognize Liberation and Freedom Day on March 3, the day Union army arrived in the city in 1865.

Speakers at the session denounced Jefferson as a racist and a rapist, reports the Daily Progress:

Lisa Woolfork, an associate professor at the University of Virginia, decried Jefferson’s treatment of his slaves, particularly [Sally] Hemmings.

“Thomas Jefferson is the R. Kelly of the American Enlightenment,” she said, referring to the American rapper who faces 10 charges of of sexual abuse. “Their non-consensual relationship was normalized by the brutality of the age.”

And in business that did not happen… There was no move at City Council to dismantle the legacy of Martin Luther King, no discussion of the revelations by David J. Garrow, a Pulitzer Prize-winning biographer, of King’s appallingly misogynistic behavior. As summarized by Politico:

The most shocking claim Garrow relates is that King was present in a hotel room when a friend of his, Baltimore pastor Logan Kearse, raped a woman who resisted participating in unspecified sexual acts. The FBI agent who surveilled the room asserted that King “looked on, laughed and offered advice.” Other allegations include that King’s philandering—long known to be extensive—was even more rampant than historians knew; that King took part in group sex; that King may have fathered a child with one of his mistresses; and—less pruriently—that King continued taking money from his onetime ally Stanley Levison, a Communist Party member, even after he was supposed to have broken off ties.

So, it turns out that America’s greatest Civil Rights icon was a reprehensible human being in his personal life. Perhaps we could call him the R, Kelly of the Civil Rights era. Do we, therefore, cease to honor him for his accomplishments? Do we, to pick an example, change the name of the Martin Luther King Performing Arts Center, operated by Charlottesville public school system? Do we overlook King’s admonition to “Judge a man not by the color of his skin but by the content of his character” to maintain ideological purity?

Of course, the Leftists who run the Peoples’ Republic of Charlottesville thrive on intellectual inconsistency. Their goal is to de-legitimize the principles this country was founded on. They despise Jefferson because they hate this country as it is currently constituted, and they want to re-make it as a progressive utopia.

If you want more Donald Trump, this is how you get it.