Thousands of Virginians Getting their Licenses Reinstated 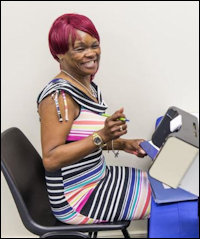 Angela Battle: one of thousands of Virginians to have their license restored. Photo credit: Richmond Times-Dispatch.

Some 37,700 Virginians who couldn’t drive yesterday can drive today, thanks to a budget amendment to Virginia’s Fiscal 2020 budget, reports the Richmond Times-Dispatch. More than 600,000 drivers have suspended licenses because a failure to pay court fines and costs, creating a Catch 22 situation for thousands: People can’t repay their fines if they can’t drive to work, and they can’t drive to work if they can’t repay their fines. The Department of Motor Vehicles will contact other Virginians with suspended licenses to inform them how to get their licenses back.

Randy Rollins, president of the Drive-to-Work nonprofit that helps people get their drivers licenses reinstated, has tried unsuccessfully for the past 10 years to get the law changed, but Governor Ralph Northam was able to enact the new policy, for a year at least, by means of a budget amendment.

Kudos to Northam. The new policy represents a victory for common sense. Unlike many phony issues ginned up by social justice advocates, the suspended license issue is real, not a figment of misleading, cherry-picked statistics. The reform is a pro-work policy that removes an obstacle that hinders people — usually lower-income Virginians, disproportionately minorities — from becoming productive members of society.

The initiative may create another problem — getting people to pay their court fines and fees. That, too, is a real issue, and it must be dealt with. But in the grand scheme of things, it is far less consequential matter in our autocentric society than depriving people of the means to get to work.

This entry was posted in Individual liberties, Labor & workforce, Poverty & income gap and tagged James A. Bacon. Bookmark the permalink.