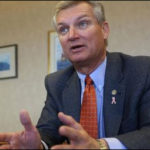 Washington giveth and Richmond taketh away. Once again, the Northam Administration wants Virginia to ignore business income tax changes made at the federal level because they would lower state revenue.

Governor Ralph Northam’s finance secretary was in front of the House Appropriations Committee Friday explaining the reasoning and complaining that new federal rules represent a double tax benefit for the affected businesses. “Not only is it expensive, it’s bad tax policy and it’s bad public policy,” Aubrey Layne, a certified public accountant, said at one point in the meeting.

Expensive is one of those “point of view” words. Expensive to whom? In this case, expensive to the public treasury. Should Virginia fully conform with all the changes in the CARES Act from early in 2020 and from the Comprehensive Appropriations Act (CAA) in late December, projected revenue would decline an estimated $190 million in the current fiscal year and almost $1 billion in Fiscal Year 2022.

For tax wonks and accountants, here is a letter Layne provided legislators with plenty of details.

In his presentation yesterday, Layne was mainly pointing to the new federal tax rules about how to handle those Paycheck Protection Plan (PPP) loans, some from last year and now the new round of loans which is coming. That is where he sees a double tax benefit, discussed below. But that is only one of several business tax provisions Northam wants Virginia to reject.

Every debate around the question of state conformity to federal tax rules gets complicated fast. Virginia is traditionally a conformity state. However the U.S. Internal Revenue Service defines income, creates exclusions, or allows deductions, Virginia just goes along with that to determine state taxable income. When Congress or the IRS changes something, Virginia accepts that change.

Except when it doesn’t. The list of how it doesn’t is about to get much longer.

Conformity with the IRS was one of the pillars of Virginia’s pro-business reputation, along with the Right to Work law, and having few state-specific regulations or employer mandates that exceeded federal law. The value of tax conformity is it simplifies the tax process: Once you calculate your federal taxable income, you just transfer that number over to your state return.

Virginia is no longer a real conformity state. It is a partial, “we go along only when we chose to” state. That is a sea change.

The Northam bill for additional de-conformity (or if you prefer partial conformity) is not one the Democrats can ram through with their own votes. It is written as an “emergency” bill that goes into effect immediately upon signing. Otherwise, it could not clearly affect 2020 tax returns due in May. But that means it needs 80% affirmative votes in both chambers. Republicans can play in this game.

The new federal tax provisions that Virginia plans to reverse include enhanced deductions for net operating losses, both or incorporated and unincorporated businesses, and tax treatment of business interest. One of the few business- related provisions not being rejected involves deductions for business meals, which Layne views as a potential boon for struggling restaurants.

Now to the PPP loans, which the federal CARES Act provided would not be treated as taxable income if the recipients used them as the government directed, mainly to stay open and staffed up in the pandemic. Northam and Layne have no argument with leaving that money off the income side of the tax return.

The issue involves how that money was spent – payroll, equipment, whatever the employer did. The second federal act, CAA, added a provision that those expenses would remain a valid business deduction. Virginia wants to deny any deduction for them if CARES Act money paid those bills.

That can be argued either way, and according to Layne even the IRS has said that provision appeared out of nowhere at the end of the bill deliberations. Layne’s argument is that is unfair to a business that didn’t or couldn’t get a PPP loan but also kept operating. Maybe, but odds are that business ended the year showing a major loss anyway. Whatever the reasons, it is now the federal approach.

Yes, the 2019 General Assembly did largely conform with the 2018 Tax Cuts and Jobs Act  But most of those rule changes increased state revenue, rather than decreasing it, as the state’s own data showed, and Bacon’s Rebellion previously reported. The only way to prevent a major state tax windfall in 2019 was cutting state tax rates, which the Assembly did not do.

Heads the state wins, tails the taxpayers lose, especially business taxpayers. It made money off conformity by refusing to cut rates in 2019, and will now make money by refusing to recognize these new rules.

Layne made one disingenuous statement Friday, telling legislators that one reason Virginia used conformity to rake more income tax out of corporations in 2019 was to fund the small individual refunds it provided. They were not related. Virginia also garnered major higher individual taxes by accepting conformity and refusing to significantly cut individual rates or expand the standard deduction.

Virginia is sitting on a financial bonanza during a crushing pandemic in large part because it refused to take advantage of the TCJA to cut individual or corporate tax rates. Had it done so, accepting the state’s claim that it now needs to de-conform from these latest provisions would carry more weight. This deserves more debate and scrutiny than it will likely get.

This entry was posted in Business and Economy, General Assembly, Taxes and tagged Conformity, Stephen D. Haner. Bookmark the permalink.