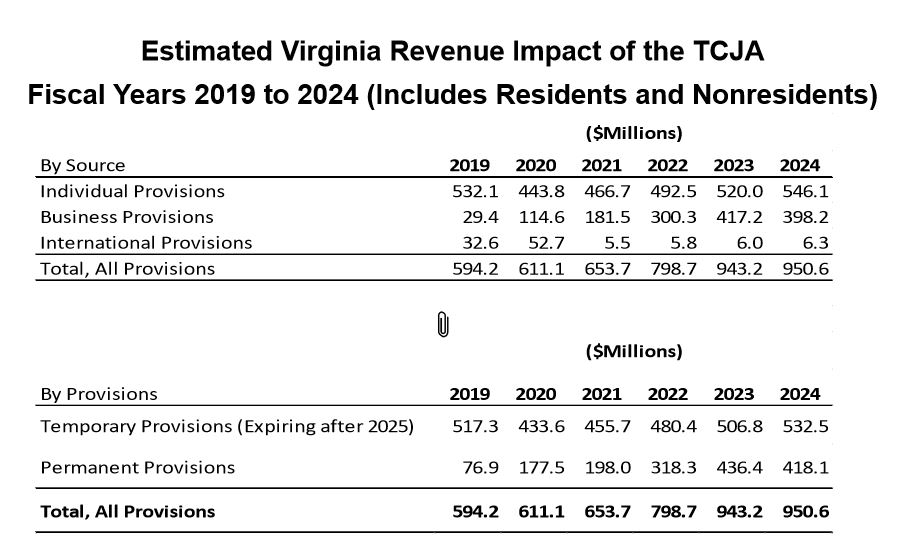 Assuming the Virginia General Assembly conforms the state’s tax rules to the IRS code as it exists now, adopting intact the recent federal changes, the state will reap an additional $3.6 billion in revenue over the next five years.

Almost $2.5 billion of that will come from personal income taxes, with an additional $1.1 billion collected from business tax returns.  By the sixth year, 2024, the total new state revenue attributed to conformity with the Tax Cuts and Jobs Act of 2017 reaches $950 million per year. 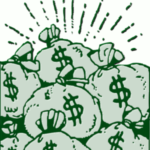 Those figures were revealed Friday by Secretary of Finance Aubrey Layne, having been forecast by a new proprietary revenue model developed for the state by Northern Virginia-based Chainbridge Software LLC.  Layne’s presentation went into detail on the state’s revenue results for the fiscal year just ended, the official revenue forecast for the year that just started, and the federal tax conformity debate.

There are two key assumptions behind those Chainbridge projections.   The first is that the state makes no changes in state tax brackets or rates or state-specific exemptions, all of which could be changed to reduce the impact on individual or business taxpayers.  The second is that taxpayers take full advantage of the new federal rules when the federal benefit exceeds any tax cost at the state level.

Governor Ralph Northam, who opened the meeting Friday with his own remarks, has proposed taking advantage of the revenue surge to amend Virginia’s Earned Income Tax Credit (EITC) making it refundable, meaning taxpayers who qualify would get any excess credit – more than their state tax liability – given to them as a tax refund.

He used the example of a lower-income family with a state tax liability of $800 and an EITC of $1000.  Right now, Northam said, “Virginia keeps that additional $200.”  Under his proposal “we’re giving that $200 back.”   Critics of the idea would argue the $200 in question is coming from other Virginians as an income transfer payment.

Previous efforts to make the state EITC refundable have been estimated to cost up to $250 million per year.  For tax year 2018, according to Layne’s data, individual taxpayers declaring incomes above $50,000 per year would be paying the state an additional $290 million, only slightly more than the cost of the EITC refunds.

Layne forcefully argued for full state conformity with the federal changes, adopted in early 2019 so the rules can apply to tax year 2018 in full.  If Virginia stands still and does not conform, individual taxpayers will have to deal with as many as 20 major differences between their state and federal returns, and for business filers it is more like 30 provisions which would differ.  For decades Virginia has traditionally conformed fully or almost in full with the Internal Revenue Code.

Passing an emergency conformity bill at the start of the January session, which would need an 80 percent vote, would not preclude a later debate about adjustments Virginia might want to make to rates, brackets, or other provisions.  In statements outside the meeting, but not stressed Friday, many Republican legislators have discussed allowing Virginia taxpayers freedom to itemize deductions on their state returns while taking the standard deduction at the federal level.

The policy combinations are endless, and Layne pledged to work with the legislators who have ideas they want to test with the new revenue projection model.