LCPS has largely failed those kids. The LCPS administration is responsible and must be held accountable.

The parents that have famously protested important grievances at the LCPS board meetings are right.

But there are groups of parents of economically disadvantaged children that deserve their say as well. I hope this article reaches them to let them know how badly LCPS has treated thousands of their kids.

Loudoun schools have denied far too many of them their futures.

It doesn’t matter that Loudoun is rich. All the money in the world won’t fix incompetent or uncaring. I don’t know which applies here, but the failure is so profound that it may be some of both.

Loudoun often brags about its overall SOL scores, but LCPS must be getting heavy for its Asian kids. There is rot underneath.

I will compare state assessments of LCPS to those of the City of Chesapeake Public schools to illustrate the failures in Loudoun.

Data from 2028-19 school year, the last before COVID, show the SOL failure rates by cohort in Loudoun compared to those in Chesapeake.  Even more personally, it shows how many thousands of more kids in Loudoun would have passed the SOLs had Loudoun achieved Chesapeake’s results. 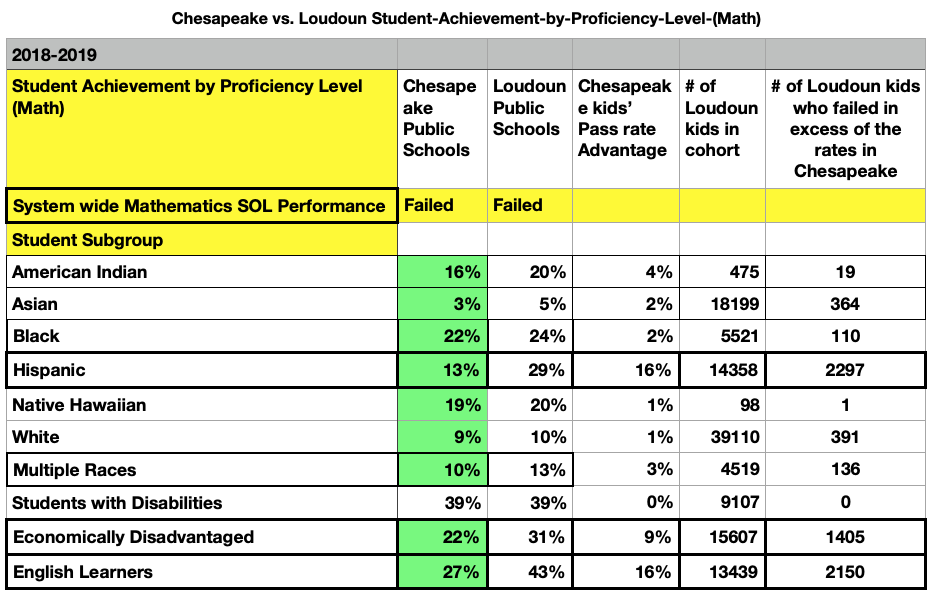 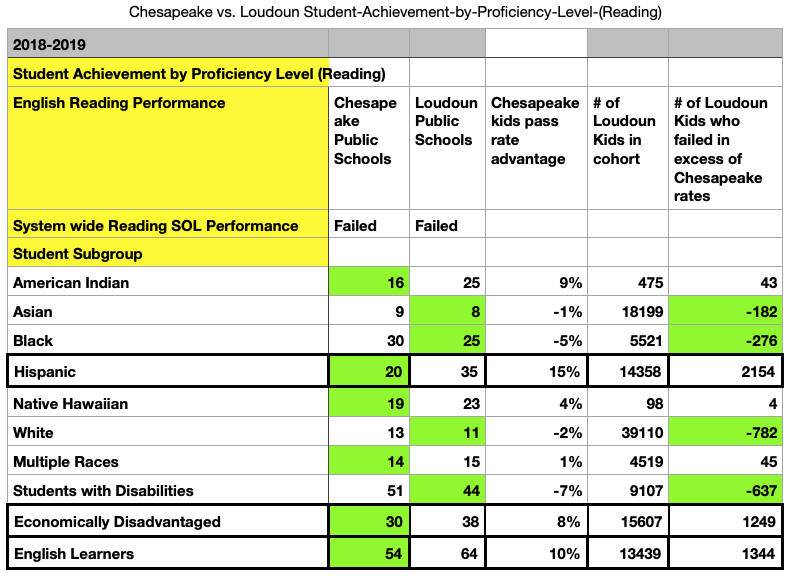 So, you can see that Chesapeake demonstrated massive advantages over Loudoun in the math and reading learning demonstrated by Hispanic, Economically Disadvantaged and English Learner kids.

Chesapeake demonstrated advantages in every subgroup in math learning except Students with Disabilities, which was a tie. Thousands of additional Loudoun students would have passed math SOLs had they learned at the same levels as kids in Chesapeake.

Reading is a mixed picture. You can see it above. But, once again, it is not a mixed picture for Hispanics, the Economically Disadvantaged and English learners. Again, thousands more of those children in Loudoun would have passed reading SOLs had they achieved the reading learning demonstrated in Chesapeake.

Clearly, LCPS doesn’t know how to do what needs to be done to help its most challenged students succeed.

The administration has flailed around trying to substitute money and ed-school fantasies for wisdom. It adds ever more staff, driving up costs without apparent value rather than looking elsewhere for what works.

The Virginia Board of Education is charged with making annual reports to the Governor and the General Assembly concerning the condition and needs of public education in the Commonwealth and to identify any school divisions which have failed to establish and maintain schools meeting the prescribed standards of quality.

In the latest report (pg.84), I note that Loudoun County declared itself in full compliance with the Standards of Quality in both 2019-20 and 2018-19 after having been non-compliant in the previous two years.

In a pigs eye.

I averaged the pass rates across every school, every subject and every cohort in LCPS (VDOE school by Subject by Subgroup report). The composite SOL pass rate across subgroups in 2016-17 was 81.2% and in 2018-19 was 77.7%. Performance declined, not improved, over the periods illustrated in the report.

Then I built the spreadsheets you see above.

Disadvantaged kids in too many LCPS schools have been denied their futures while the extraordinary Asian students in Loudoun have masked that failure by their numbers and academic success.

I lay both the misrepresentation in reporting and, far more consequentially, the poor academic performance of students who depend of them, at the feet of the superintendent and the a major slice of senior LCPS administration officials.

I have accessed data from the state. I am aware of the horrid results. Whoever in the LCPS administration submitted the report knew it. The Superintendent and Deputy Superintendent know it.

The school board should consider cleaning house. The Superintendent needs to go.

LCPS lists 42 senior staff in the Superintendent’s office. Under that organizational structure, I recommend the board also consider replacing the Deputy Superintendent and his nine senior subordinates.  They are directly responsible for the quality of schools.

And find out exactly what the Equity Director has been doing in the face of the dreadful academic results of protected classes.