Is It the Death Knell For Dominion’s Pipeline? 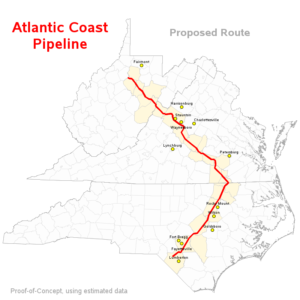 For more than a decade, hydraulic fracturing drilling for natural gas and oil has transformed the American energy picture, leading to big revivals in such energy fields such as Marcellus in West Virginia and Pennsylvania and the Bakken field in the Dakotas.

It has prompted Dominion Energy and its utility partners to push forward with an $8 billion or so Atlantic Coast Pipeline that will take Marcellus gas through Virginia all the way to South Carolina. The project, tied up in court fights, has been enormously divisive as property owners have protested the utilities’ strong arm methods of securing rights of way.

But now there’s clear evidence that the fracking boom is over, and that has huge implications for the ACL project. The reason? Oil and gas prices have dropped thanks to a perfect storm of issues. There’s the coronavirus pandemic tanking the U.S. economy, bitter energy wars between Russia and Saudi Arabia, and the fact that fracking gas and oil rigs are enormously expensive and wells can produce for only a short period.

The Hill reported last week: “Oil sank to $23 (a barrel) from a high of $53 in mid-February, far below the break even point that producers need to drill new wells to maintain supply, and with volumes rapidly diminishing at existing wells.”

The newspaper points out that a fracking well can cost more than $10 million while a traditional well is only $2 million. As price pressure mounts, the number of wells nationally has plummeted from 790 to 772 in one week.  At the Bakken field, reports The Washington Post, producers are cutting costs.

The situation has clear implications for the ACL project which was conceived at the height of the Marcellus boom. Dominion claimed that the gas would be badly needed in coming years while others claimed there isn’t enough demand.

A prolonged economic slowdown caused by COVID 19 would obviously weaken demand for gas. There’s also a suspicion, denied by Dominion, that the ACL project is actually intended to go to Liquefied Natural Gas seaports for export. But with the world petroleum market in turmoil and prices low, that doesn’t sound too promising.

When Dominion and its partners announced the project, they said its price tag would be about $5 billion. Now it is probably $8 billion. ACL officials have pushed back their projected opening by at least two years. Work stopped more than a year ago due to lawsuits.

The U.S. Supreme Court is expected to decide on permitting questions within a few months. For now, it looks like good, old-fashioned economics will do in the project.