In the Naming Rights Sweepstakes at UVa’s Ed School, A Sophie’s Choice for the Woke 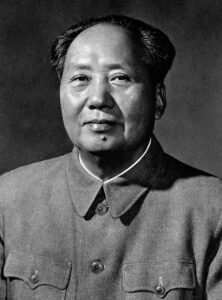 “Sophie’s Choice” is centered on a scene in Auschwitz where Sophie has just arrived with her ten-year old son and her seven-year old daughter. She loves them both equally. A sadistic doctor tells her that she can only bring one of her children; one will be allowed to live while the other is to be killed.

A reader of an earlier post suggested with tongue in cheek that UVa’s School of Education and Human Development be renamed the Marx School of Re-education.

It would insult the leadership of the Ed School to call them theorists.

Accused accurately and publicly of “shoddy scholarship” by the Rector of the University, those worthies may consider them elves street fighters leading a cultural revolution, not academics. If so, they will wear the label proudly. The T-shirts write themselves.

If given only two choices similar to those that faced Sophie, UVA’s Committee for Naming must let Marx go and put Mao’s name on the door.

First let’s look very briefly at critical theory, product of the so-called “Western School” of Marxism that emerged in Frankfort School in the 1930’s.

“Critical theory  is a social philosophy pertaining to the reflective assessment and critique of society and culture in order to reveal and challenge power structures. With origins in sociology, as well as in literary criticism, it argues that social problems are influenced and created more by societal structures and cultural assumptions than by individual and psychological factors. (It maintains) that ideology is the principal obstacle to human liberation”. …

“Postmodern critical theory analyzes the fragmentation of cultural identities in order to challenge modernist-era constructs such as metanarratives, rationality, and universal truths, while politicizing social problems “by situating them in historical and cultural contexts, to implicate themselves in the process of collecting and analyzing data, and to relativize their findings.”

Critical Theory is intensely pessimistic. It sees nothing worth saving. It rejects the concepts of free will, personal agency and individual rights. Societies must be torn down in order to build anew. And there is only one acceptable way to rebuild them. This profoundly destructive theory remained in the universities until the academics found a way to connect to individual interest groups.

With the development of critical race theory, it has escaped from the academy into the real world and morphed from theory to religion with accompanying dogma.

Critical race theory has created what believers proclaim all right thinking African Americans must think and want.  They try to persuade Black Americans and shame non-black Americans to go along quietly while its most radical adherents create violence to do with fear what cannot be accomplished by persuasion or shame.

While that has been going on, critical race theorists have targeted K-12 education. The critical race theorists in the universities found that they could radicalize students there, but not enough in their view. They decided they had to get to kids before that had absorbed too much of the ideals and world view of their parents, starting in kindergarten. They are accomplishing that in Virginia at a breakneck pace.

The person on Horseback

Critical race theory currently lacks an acknowledged leader, but there will be no shortage of contenders for the role.

Consider Virginia Secretary of Education Atif Qarni. Qarni ran for a seat in the Virginia House of Delegates in 2013 at the age of 35, losing to incumbent Bob Marshall, and for the Virginia Senate in 2015, losing the Democratic nomination to Jeremy McPike.

At the end of his quest for elective office, he could not get nominated by Democrats. Yet Ralph Northam plucked him from teaching in Dale City and made him Secretary of Education.

Quari is a true believer in and a vocal supporter of critical race theory.

He is the voice behind changes in admissions to the Governors Schools to increase diversity == most famously the Thomas Jefferson High School for Science and Technology and Maggie Walker controversies. He puts our money where his mouth is.

Secretary Qarni accused the opponents of the changes of using “the same rhetoric that was used during ‘Massive Resistance.’” His is critical race theory in tear-down mode. More from that same interview:

If you can do this on your own, great; if not, the state’s coming and we’re going to make the change.”

“About your buy-in question, it’s not just white parents… If you look at it nationally, it’s happening…also with Asian-American parents as well… Because at TJ, the population is 70% Asian. At Maggie Walker, it’s only 25% Asian, but it’s growing.”

“We just have generation after generation after generation of built-up systemic racism; it comes in all different forms. We all are well aware of this, and we have to embrace that there’s a problem that exists. And we have to be proactive and all of us address it. It shouldn’t just fall on the shoulders of African Americans to talk about systemic racism that they’re facing – it’s everybody’s responsibility. So when I have conversations with my Asian-American friends, it’s like look, the very freedoms that you enjoy as immigrants or AAPI (Asian American and Pacific Islander) families, they were done on the sacrifices of a lot of different social justice movements and civil rights movements, generation after generation, that were led by African Americans. And it’s easier for you to assimilate and your experience is very different. So you have to truly understand…what the problem is… it’s race and economics compounded and there’s an intersection of the two.

Systemic racism and intersectionality — the core of Critical Race theory.

In a  related development, the Sacramento Bee reported that The Stop AAPI Hate Reporting Center received 1,116 reports of anti-Asian discrimination in California between March and July this year.

Combine Quarni’s new Governor’s School open admission standards and racial quotas with Albemarle County’s new grading system, and every kid will get grades above 3.5 that must not consider doing homework, class participation or actual correct answers on tests, and every school will be a Governor’s School teaching critical race theory.

Everybody will get a trophy. Class size will not be a problem, because students and their parents will accelerate a long path of abandoning Virginia public schools for alternatives.

Until every child is mandated to attend a public school.

The quotes below are from a short and very useful compendium of different historians’ assessments of Mao’s cultural revolution by Jennifer Dowland, “The Chinese Cultural Revolution: A Historiographical Study,” 2004, Cal Poly Pomona. These quotes from her work will illustrate the similarities between today and China’s Cultural Revolution.

“Mao called for a wave of criticism against “reactionary bourgeois ideology” in 1966. That began the decade-long Great Proletarian Cultural Revolution. Mao called on students to purge those that had betrayed the revolution. The student revolts that began in Beijing educational institutions quickly led to violence. Libraries were burned to the ground by Red Guards. Anything that was not in line with Marxist-Leninist Mao Zedong Thought was destroyed.”

“Widespread violence was the Cultural Revolution’s most unusual aspect and has become the main definition of this time.”

“During the Cultural Revolution, Mao attempted to reduce the gap between the elite and the masses by exploiting the existing social contradictions. … The mass organizations behaved according to their own interests because they had such a stake in the outcome of the Revolution.

“… the authoritarian personality characteristics that the activists learned were powerfully linked to a new system of political socialization that was based in the schools. The decline of the family as a socialization agent was replaced by the authority of the state, and school-learned socialization. The traits the children acquired at home led them to differing experiences.”

(The historian Anita) Chan chose four students (and) … then chronologically described their experiences, beginning with the activists as children in Primary School and concluding with their participation in the movement. She describes how in primary school character formation and political education was most important. As the children became adolescents, their political socialization became more demanding. Education shaped the behavior of teenage students through peer pressures and a strictly controlled social environment.”

In other key respects, Mao’s Cultural revolution was different than today’s, most prominently in:

The choice by acclamation

So, bottom line, Marx was a theorist and Mao a practitioner. As for renaming Curry, if those were the only two choices, I think they should go with Mao.