How to Empower Low-Income Communities in Virginia 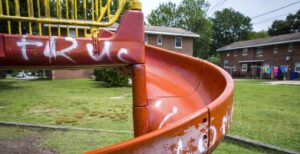 There is no one-size-fits-all when it comes to describing poverty in Virginia. Portsmouth, aka “Pistol City”, population 93,000, is six hours away from Galax, population 6,000. The housing projects of east and south Richmond are very different from the hollowed out small towns that dot Southside and coal country. Both urban and rural decay are powder kegs waiting to blow, but no one has seriously tackled them in Virginia politics for decades because the issues are so complex.

Conservatives are complicit in this problem because for too long they have allowed liberals to frame the debate and set policy. The result is that since 1964, more than 1,500 “low income apartment communities” have sprung up around the Commonwealth. They are hotbeds of drug abuse and violent crime. Rural Virginia has some of the largest concentrations of people over the age of 65, in part because young people can’t find enough good paying jobs. Democratic mayors, Democratic governors, and Democratic federal policy have predominantly shaped the current state of Virginia’s communities. It is a disgrace.

To start to develop solutions, we have to evaluate the roots of the problem. One of the things that you will notice walking around many housing projects is how isolated and in some cases, empty of outdoor life they are. They are badly designed, set away from services, and with no mixed-use opportunities for jobs close to home. If you can interview some of the residents and get to the point that they trust you, they’ll tell you there is nothing to do but sell some weed, play ball, and wait for something to change.

Another issue that’s terrible for the children is how chaotic living arrangements are. Mom might be strung out or in a clinic. Dad might be splitting time with 5-10 other baby mommas, your Aunt will give you a couch, but she’s dealing with five other kids, and Grandma is tired after commuting 45 minutes each way and working two jobs.

Everyone talks about how important access to the internet is for everything, but what if your community isn’t wired up? What if you don’t own a computer? You go to school and there are a lot of other kids in your same boat.

The lack of maintenance and clean-up is also noticeable. Why do so many people carry guns in urban poor areas? Because there are not enough police around to provide security, and when the police are around, they look at everyone like they are a criminal. Imagine 3-4 generations growing up in situations like this! Then, when you send people to prison, they join a gang for self-protection, and bring the prison culture back to the streets. It’s like poisoning a poisoned victim some more.

So what would a conservative anti-poverty agenda look like?

Virginia needs to model a new approach to community development because current approaches are not working. Virginia is worse off today in terms of the War on Poverty than when Lyndon Johnson declared it sixty years ago. The current situation is fuel for resentment, rage, fear, crime, despair, unemployment, and hopelessness. Liberals have failed. Can conservatives do better?

Stephen Jordan is a member of the Kitchen Table Study Group, an initiative of the Virginia Legacy Forum.

This entry was posted in Poverty & income gap and tagged Guest contributors. Bookmark the permalink.