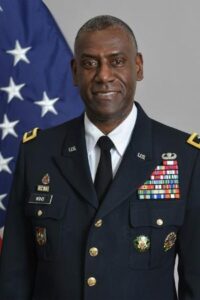 Maj. Gen. Cedric T. Wins will serve as the Virginia Military Institute’s 15th superintendent after a unanimous vote by the military academy’s Board of Visitors this morning. A 1985 VMI graduate and career military officer, Wins has served as interim superintendent since shortly after the November resignation of J.H. Binford Peay III under pressure from the Northam administration.

Wins, an African American, has led the academy during one of the most tumultuous periods in its modern history. After anecdotal reports of racial incidents in recent years, the Institute has been characterized as “relentlessly racist” by The Washington Post and criticized for its “appalling” racism by Governor Ralph Northam and Democratic Party leaders. VMI is currently being scrutinized in an “equity audit” ordered by Northam, in which investigators are poring through documents, conducting surveys on attitudes toward race, and  interviewing students, faculty, staff, and alumni.

The Superintendent Search Committee nominated Wins from what chairman Gene Scott called a “very strong” candidate pool. “Maj. Gen. Wins distinguished himself as a frontrunner through his experience as a military leader and innovator,” said Scott. “His ability to communicate a vision for the development of leaders of character and the future of the Institute set him apart from others.”

According to a VMI press release, Wins spent the first three months conducting his own assessment of the culture, policies and procedures in place at the military academy. He identified five desired outcomes moving forward:

Achieving diversity and inclusion, which had been a priority for several years before the current furor, was difficult given VMI’s history and traditions tied to the slave-holding Confederacy. Under Superintendent Peay, VMI was successful in recruiting more cadets of Asian and Hispanic background but lagged in recruiting African American students who, understandably, did not warm to the veneration of Stonewall Jackson and the role of VMI cadets in the Battle of New Market. Of those blacks who did attend, a large percentage were athletes. Wins himself played on the VMI basketball team and was one of the top five scorers in school history.

Wins has promised VMI’s total cooperation in the racism investigation, prompting some alumni to suggest that he has not been assertive enough in defending the institute. However, as interim superintendent, he found himself in an exceedingly difficult situation. VMI relies upon millions of dollars in annual state appropriations, financial aid to students, and backing for construction bonds. Democratic Party leaders made it crystal clear that VMI’s funding was at stake. VMI cannot afford to perceive as “stonewalling” the investigation in any way.

Bacon’s bottom line: Unstated in the Board of Visitors press release today, VMI needs an African American in a position right now. Wins is committed to core VMI institutions such as the rat line and honor code — even if he made the decision to eliminate the announcement of expelled cadets for honor offenses during the drum roll ceremony — but it is hard to accuse him, as an African-American, of white-washing racism at the academy. It is undeniable that racial incidents have occurred at VMI. The question is whether anecdotal stories reflect systemic attitudes and practices. Wins has managed to maintain the trust of VMI alumni without antagonizing powerful Democrats committed to a “social justice” agenda. It is hard to imagine anyone better suited to the challenges of the times.