How Hospital Monopolies Extract their Pound of Flesh 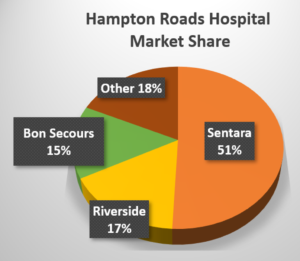 The average cost of family coverage in a private health insurance plan in Virginia ran more than $26,300 in 2017, according to data from the Commonwealth Fund. That number includes the employer share of the insurance premiums, the employee’s share, and out-of-pocket costs. If you want to understand why middle-class standards of living are eroding in the United States, this is a big reason why. If you want to improve middle-class standards of living, then you need to also understand why the cost of medical insurance is so bloody expensive.

There are lots of scapegoats in this story. Big Pharma and the high cost of prescription drugs is a favorite villain. The insane red tape associated with administering health plans is another. But one of the biggest drivers of higher health costs gets very little attention: the amalgamation of hospitals into vertically integrated health care systems that enjoy monopoly power in the so-called medical “marketplace.”

This post puts into writing many of the key points I made in the webinar presentation found in my previous post. Healthcare in Northern Virginia is dominated by the Inova Health System, in western Virginia by the Carilion Clinic, and in Hampton Roads by Sentara. (The market in Richmond is divided between Virginia Commonwealth University, Bon Secours, and HCA.) In this post, I’ll focus on Hampton Roads to illustrate the dynamics at work in all healthcare markets.

As seen in the pie chart above, compiled from Virginia Health Information financial numbers, Sentara dominates Hampton Roads with 51% market share. Other major players include Riverside Health Systems, with 17% market share, and Bon Secours with 15%. There are a couple of independent hospitals, but they don’t shape the market.

The pie chart actually understates Sentara’s dominance. First, most of Sentara’s operations are concentrated in south of the James River, where it controls 62% of the hospital market. Second, these revenue numbers don’t take into account that Sentara also owns its own health plan as well as the Sentara Medical Group employing 567 physicians at last count.

Sentara, a nonprofit enterprise, is phenomenally profitable. Based on 2018 data, Sentara hospitals in Hampton Roads generated $2.5 billion in net patient revenue (after insurance “discounts” are taken out) and almost $240 million in profits — a profit margin of 9.6%. A rule of thumb in the hospital industry is that a financially healthy hospital needs to generate 3.0% to meet the needs of its community. 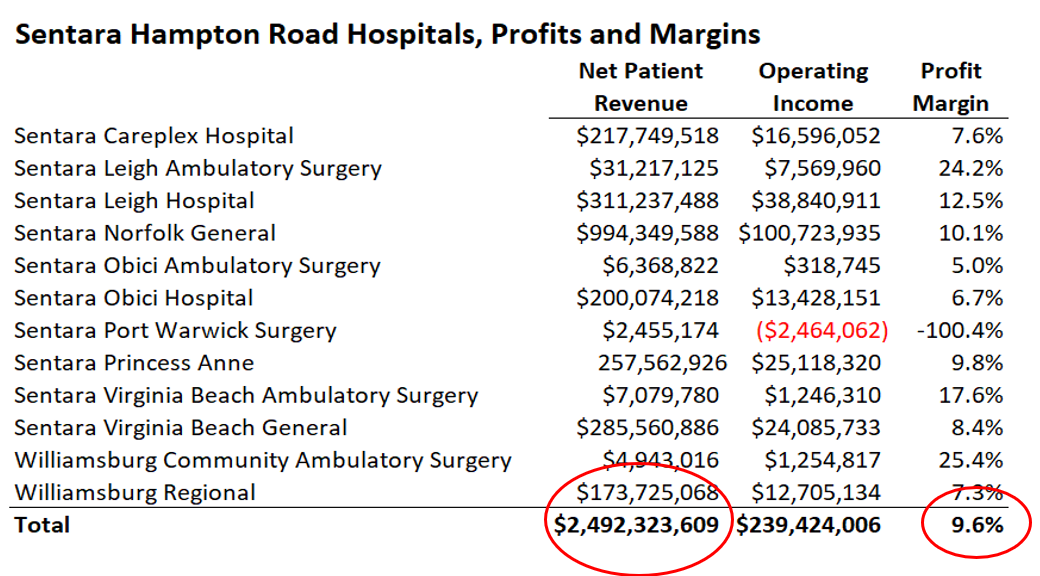 How does Sentara generate so much profit? One way is using the Certificate of Public Need (COPN) to block competition in its core market. Jim Sherlock has documented on this blog how the politics of COPN work. Here’s the end result: There are only two unaffiliated ambulatory surgery centers in south Hampton Roads, a metropolitan area of roughly 1.1 million people.

What does that mean in practice? Virginia Health Information provides some tantalizing clues by comparing the statewide average cost for certain types of outpatient surgery in ambulatory surgery centers, physicians offices, and outpatient hospital settings. Here are the numbers for colonoscopies: 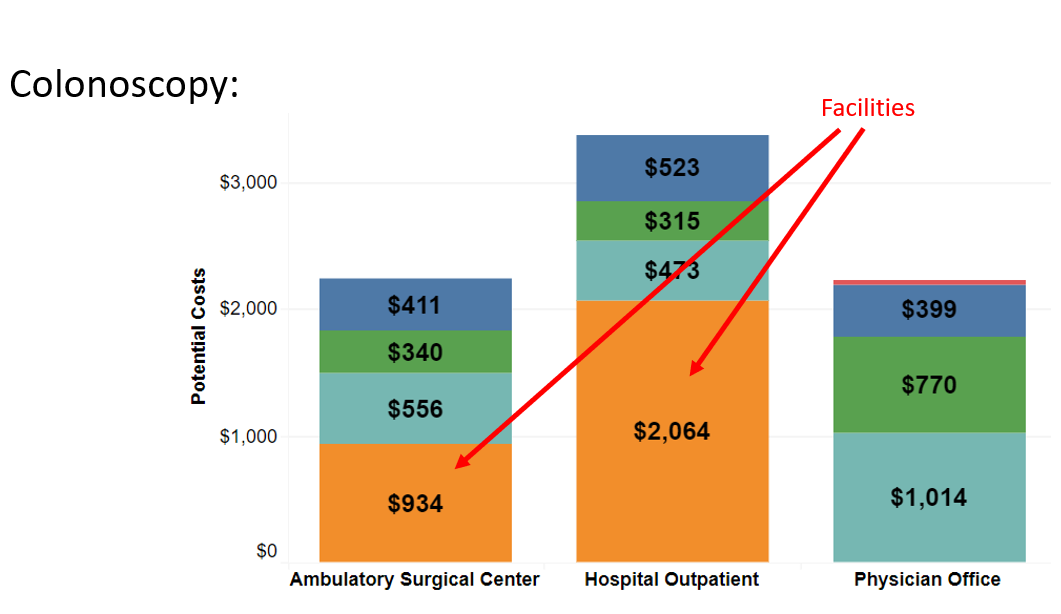 You can see that physicians and ambulatory surgery centers charge roughly the same for the procedure. Physicians don’t have a “facilities” charge, but they do jack up their charges for physicians, nurses and anesthesiologists, so they are competitive with ambulatory surgery centers. But look at how much hospital outpatients charge compared to ambulatory surgery centers. Focus on the orange blocks, which represent facilities charges. Hospital outpatient facilities charge a $1,130 premium. To be sure, that’s a statewide average. We don’t know if the differential in Sentara territory is bigger, smaller or the same. But it’s not unreasonable to think that the premium is on the same order of magnitude. 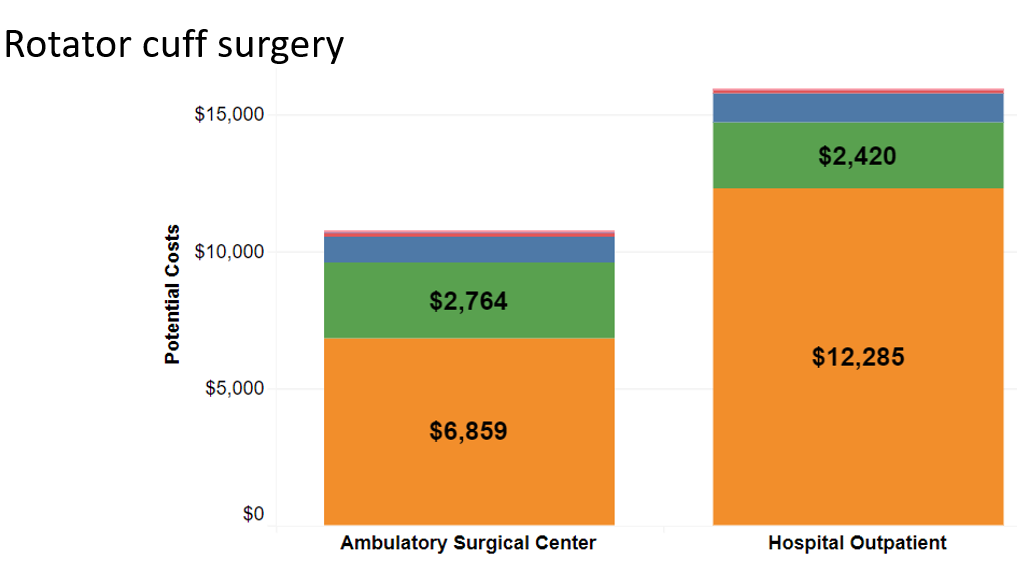 And the numbers for tonsillectomies. Outpatient hospital premium: nearly $2,600. 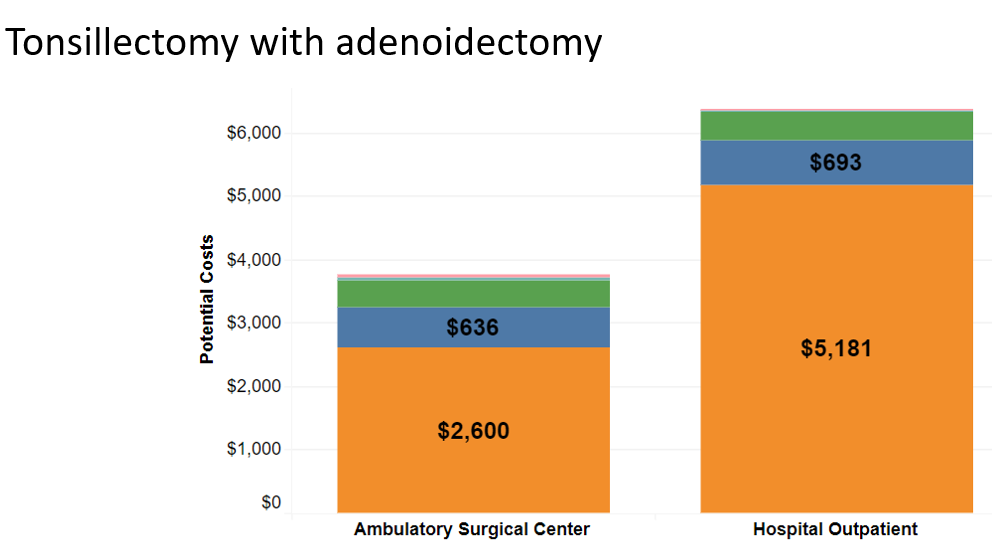 When hospitals use COPN to eliminate competition from free-standing ambulatory surgery centers, patients have few choices. Some get procedures done in physicians’ offices (if the physicians are set up to conduct the procedure). Many go to hospital-owned outpatient facilities that bill some 50% more for the same procedure.

That, my friends, is what monopoly healthcare profits look like.

Sadlyl, there is no way for consumers to fight back. The fact is, even though colonoscopies, rotator cuff surgeries and tonsillectomies are discretionary in terms of time and place, there is no price transparency. Patients can’t comparison shop based on price even if they were inclined to do so (which, given the nature of the third-party payer system they rarely are). Needless to say, hospitals have resisted any and all efforts to create price transparency.

You think $26,000 a year for family coverage is bad? Until Virginia ends COPN, allows competition, and creates genuine markets with price transparency, health care costs will go only higher.

This entry was posted in Health Care. Bookmark the permalink.