Governor Northam: Do You Believe in Miracles? 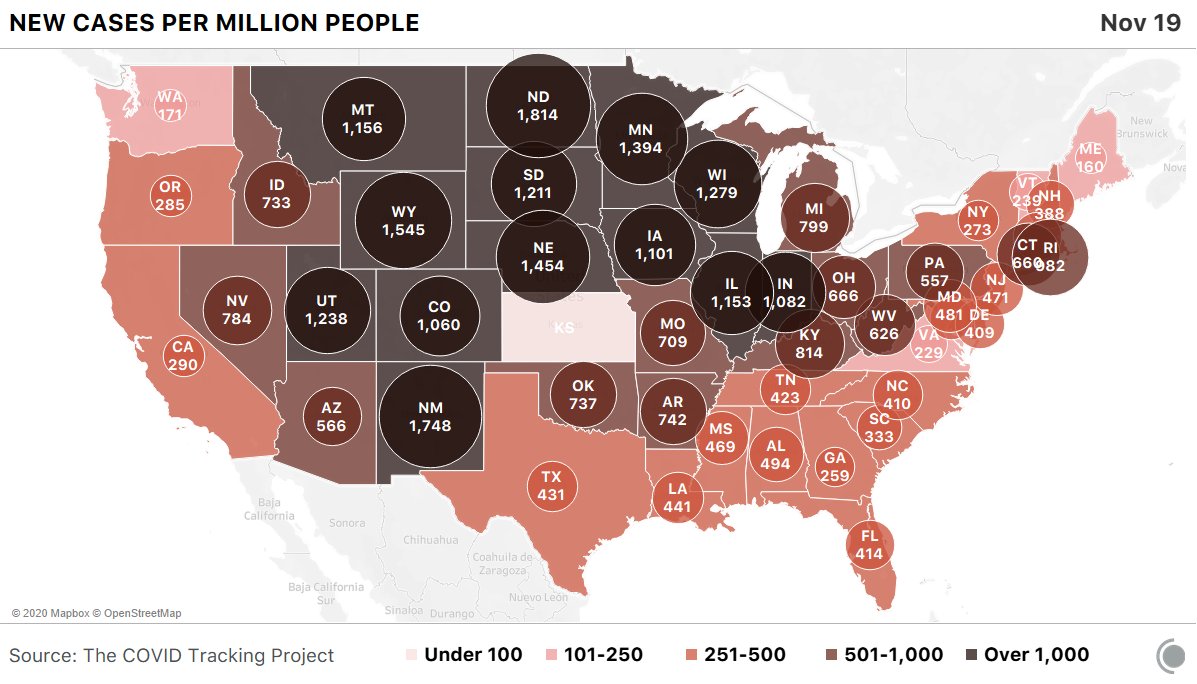 Come out with your masks on, we’ve got you surrounded. COVID-19 new cases, hospitalizations and deaths continue to rise in Virginia. However, the situation is not as dire in Virginia as elsewhere in the United States (see graphic above). At 229 new cases per million people Virginia is well below all neighboring jurisdictions. Kentucky at 814 per million tops the list of sick neighbors while D.C. at 302 is the second most healthy in our immediate vicinity. The question for Virginia’s governor Ralph Northam is, “Do you believe in miracles?” Or, perhaps somewhat less charitably, “Are you feeling lucky, punk?” Whether one prefers the Hot Chocolate version or the Dirty Harry version, we are in an interesting situation. Do we dare hope that Virginia will miraculously avoid the surge that is consuming most other states? Or, do we assume it is inevitable that we end up in the same situation as Kentucky, et al and start serious COVID abatement efforts (e.g. lockdown and partial lockdowns) now?

Proper Planning Prevents Poor Performance. So far, Gov Northam has been unable or unwilling to discuss his plans for combating the recent surge of COVID-19 cases in Virginia. He holds press conferences discussing the matter but doesn’t provide any forward looking guidance. He has tightened restrictions but he hasn’t supplied any logic or algorithmic basis for what restrictions he decided to tighten or why he tightened when he did. Northam did cite news coverage of temporary morgues elsewhere in the United States as one reason why he announced tighter COVID measures a week ago. Let’s hope our governor doesn’t accidentally tune into an episode of The Walking Dead. Who knows what he may mandate.

RoUS. Virginia has long been known as an insular place. Many residents of the state believe that the world ends at the Old Dominion’s borders. However, there is no truth to the rumor that maps currently for sale in Richmond simply show the phrase “Here there be monsters” where the state of Maryland should be. Even among the ruling class in Richmond there is a begrudging acceptance that there are 49 other states and the District of Columbia in this country of ours. Does anybody wonder what those other states are doing to curb the COVID epidemic? Here are some examples:

If Virginia has similar science-based algorithms for policy setting they are apparently unknown to Gov Ralph Northam.

Spectral analysis. There is a wide spectrum of actions that U.S. states are taking to combat the ongoing COVID-19 surge. Virginia has some of the mildest restrictions in the U.S. perhaps befitting a state with one of the lowest cases per million in the U.S. However, California Gov Gavin Newsom has declared that his state will “pull the emergency brake” on economic activity. This is noteworthy since California has a cases per million rate of 290 which is comparable to Virginia’s rate of 229. However, California has a sophisticated metrics-based process for analyzing COVID spread and taking action while Virginia has a governor who apparently gets his calls to action from whatever pictures appear on various news programs. For a look at harsh restrictions New Mexico is a case in point. With a cases per million rate of 1,748 New Mexico ranks second worst behind North Dakota. The Land of Enchantment has a strict stay-at-home order in place with all businesses other than grocery stores and pharmacies ordered closed. Could they have avoided that level of economic shutdown with a more methodical approach to combating the early phases of the resurgence? Probably a moot point now.

The wrap. Virginia has been nothing more than lucky (to date) with regard to the ongoing COVID-19 surge. Our luck will run out — sooner rather than later.  While other states spent the months since April building metrics-based plans for the widely expected resurgence Virginia’s government focused on taxing electricity and removing statues. We are now left with no cohesive state plan and no predictability regarding the relationship between COVID-19 metrics and the actions our government will impose at different levels of surge. By all appearances, Northam is flying by the seat of his pants. This risks the health of millions of Virginians. It also risks the economic prosperity of millions of Virginians since our governor’s edicts are unpredictable at best. Otto van Bismarck once quipped that “God has a special providence for fools, drunkards and the United States of America.” Let’s hope He also has special providence for Virginia because if we end up at 1,000+ cases per million (like 13 states right now) there will be hell to pay.

There are currently no comments highlighted.
This entry was posted in Commentary, General Assembly, Governance and tagged COVID, COVID-19, DJ Rippert, Don Rippert. Bookmark the permalink.

26 responses to “Governor Northam: Do You Believe in Miracles?”