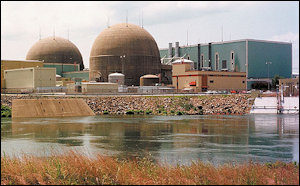 Yesterday I highlighted a study by University of Virginia professor Bill Shobe purporting to show how Virginia can achieve a “zero carbon” economy by 2050. A key element for eliminating greenhouse gas emissions was re-licensing Virginia’s four nuclear power units — two at the North Anna power station and two at the Surry station — to provide reliable base-line capacity to offset the effects of intermittent power production from solar panels and wind turbines.

We cannot take it for granted, however, that Dominion Energy will win renewal of those licenses. The licenses for North Anna Units 1 and 2 expire in 2038 and 2040, at which time they will be 60 years old. Dominion would like to continue operating them for an additional 20 years. Foes of nuclear power hope to derail the renewal of the licenses for North Anna, which, located above a geologic fault line, shut down temporarily after a 2011 earthquake measuring 5.8 on the Richter scale.

Beyond Nuclear, the Sierra Club and the Alliance for a Progressive Virginia are seeking a formal hearing before an Atomic Safety and Licensing Board panel, according to The Central Virginian. The environmental groups say that because a new nuclear reactor at North Anna would have to meet a higher standard for withstanding an earthquake, an upgrade might be warranted for the two existing units also.

“North Anna produces 21 percent of the electricity in Virginia,” said John Cruickshank, a member of the Sierra Club’s Piedmont chapter. “We know it’s not going to shut down any time soon. The question is, can it run safely for 80 years?”

Only one other nuclear facility in the United States has received a second 20-year extension from the NRC, and that plant is not in a known fault zone, he said. “The last environmental impact study was in 1996 or so, when they applied for the first extension. That work did not take into account what occurred in 2011.”

Cruickshank also raised the specter of the plant’s pipes and other components weakening over time. He urged the Nuclear Regulator Commission to lab-test selected equipment from the facility.

Dominion Energy officials insist that the nukes can continue to operate safely. But there is a deep reservoir of distrust and antipathy in the environmental movement and much of the public towards Dominion. In defeating the Atlantic Coast Pipeline, Virginia environmentalists perfected the art of using endless legal challenges to delay and run up the cost of energy projects until they become economically unfeasible. In the case of Dominion’s nukes, expect foes to raise a never-ending list of environmental and safety fears and demand ever-tighter controls that will drive up the cost.

Meanwhile, you can count on solar and wind power to get a free ride. I have yet to read a single op-ed or a hear a single quote from the spokesman of a Virginia environmental organization express concern about the heavy metals contained in solar panels and wind turbines, the solar and wind supply chains that rely upon conscripted labor and child labor to mine the metals, or the systemic risks associated with an electric grid entirely reliant upon solar, wind, and battery storage. If Virginia is to have a carbon-free electric grid by 2050, the only sane way to do it is with nuclear power. Unfortunately, sanity is an extremely scarce commodity these days.

This entry was posted in Energy, Resilience and tagged Dominion, James A. Bacon. Bookmark the permalink.