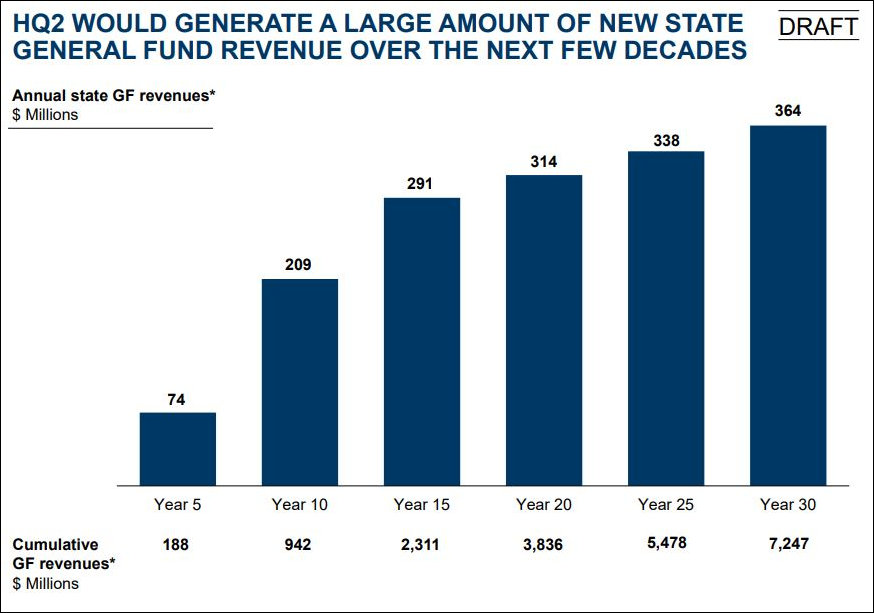 Virginia has committed to investing a sum unprecedented for an economic development deal in the Commonwealth — roughly $2.5 billion in state and local dollars to bring Amazon, Inc. to Northern Virginia. In a presentation to the House Appropriations Committee yesterday, Stephen Moret, CEO of the Virginia Economic Development Partnership (VEDP) provided a detailed account of the incentives. Now that the numbers are out, the public has an opportunity to review the deal. At Bacon’s Rebellion, we love critiquing things, so here goes…

Cash flow positive for the state. The first point to note is that, while Virginia is making a massive public investment to the project, it will be cash-flow positive for the Commonwealth from Year One. If Amazon pays its projected 2,500 employees an average of $150,000 a year — the target number to qualify for state subsidies — the company’s Virginia workforce will generate a lot of new income taxes and sales tax revenue. By Year Ten, added state revenue from direct, indirect and induced employment will amount to $209 million. The sum could grow to $364 million within 30 years. That compares to a General Fund revenue forecast of about $20 billion in Fiscal Year 2019.

As Steve Haner explained in the previous post, the deal will have a minimal impact on the current budget cycle, and future expenditures on higher education, transportation and direct subsidies to Amazon will be phased in over time. The project is designed to ensure that new General Fund revenues will exceed project-related outlays. In other words, according to Moret’s numbers, the state will make a “profit” on the deal from which the entire state benefits.

Investing in competitiveness. A second key point is that 60% of the incentives will be invested in infrastructure and educational programs that don’t go into Amazon’s pocket. I have a huge philosophical problem with the state giving $550 million in Phase One (and another $200 million in a potential Phase Two) to one of the world’s richest companies. Talk about welfare capitalism! But Amazon could have located in Dallas, Texas, or a handful of other cities, so it has the power to play off one location against another. I don’t like it, but that’s the way the world works. The question for Virginians is whether or not the state comes out ahead.

Critical to the deal, Virginia will invest heavily in building its tech talent pipeline. According to Moret’s presentation, the state envisions producing approximately 25,000-35,000 new degrees (over and above baseline levels) in computer science and related programs over the next 20 years. That’s more than Amazon will require. So, labor-starved tech companies other than Amazon will benefit from the investment.

In an earlier post, I had expressed concern that the state would be subsidizing Amazon’s employee recruitment efforts to the tune of $22,000 per employee, giving the company an immense advantage over other Northern Virginia companies competing for talent. In his presentation, Moret acknowledged that there would be “short-term pressure” on Northern Virginia job markets, but that NoVa executives were mostly positive about the deal. His presentation includes a sampling of reactions back in February:

“The economic lift that we get in Virginia, the branding part of it, would be a strong positive for our recruiting efforts. Clearly we will be competing for talent, but that’s fine,” said a Fortune 500 CEO. “I think it’s important for regions to have a diversity of employment options. The economic lift and intellectual lift for the region is a strong, strong positive. I would like to see us get selected.”

“It would be a double-edged sword. Great for the economy. Great for the brand,” said the CEO of a successful tech company. “Long-term it would be good, but it’s another competitor to deal with for talent. … It would give cachet to our area.”

Said the C-level exec of a Fortune 500 company: “In the short run, it will entail some competition for talent. But it’s very powerful for the region for the long term. We’ve made Virginia our hub. The fastest growing part of our ecosystem
is tech – we hire thousands of associates [every year]. We want to have an ecosystem where new tech grads stay here and where there is a desire of folks from around the country to move here.”

The workforce worries are real. But the Virginia’s higher-ed investments will expand the local talent pipeline, Moret argues, while the presence of Amazon will help give the Northern Virginia tech sector a more positive brand nationally, aiding recruitment from other labor markets.

Meanwhile, the state, Arlington County, and the City of Alexandria will spend hundreds of millions of dollars building out transportation infrastructure serving the Crystal City/Potomac Yard area. The transportation initiatives, designed to complement walkable urbanism in the region’s urban core, will accommodate business and residential growth for more than just Amazon. The Metro bus and rail system is operating at significantly below capacity, notes Moret. This deal could boost ridership and revenues for the troubled mass transit system.

As Arlington and Alexandria re-develop the region as a walkable mixed-use community, Arlington projects that 77% of Amazon’s workers will walk, bike, car-share or take mass transit to work. That number, if accurate, is phenomenal. By creating a new template for Crystal City/Potomac Yard, Amazon could catalyze the development of even more transportation-efficient walkable urbanism that can soak up a lot of future transportation demand.

The devil is in the details. Many important questions remain unanswered. One is whether Virginia can deliver on its end of the deal. Can Virginia K-12 schools deliver enough graduates prepared for rigorous computer-science programs — even with the injection of $50 million dollars over 20 years for tech education and internships? Is there a sufficient number of graduates even interested in such programs? Given the high tuition they charge out-of-state students, will Virginia institutions be able to make up any shortfall in Virginia applicants by recruiting from outside the state?

Another issue is traffic congestion. While Amazon will have a small traffic footprint for the size of its project, the giant new corporate campus plus spin-off growth still will add thousands of drivers to Northern Virginia’s overloaded highway network. Northern Virginia citizens most affected by the project will want to see a detailed traffic impact analysis.

One more issue: Affordable housing. Moret characterizes Amazon’s impact on rental markets in metropolitan Washington as “small.” Quoting Zillow, CoStar and Apartment List as data sources, he suggests that the average rent in 2026 will be between $2,216 and $2,233 per month. “HQ2 [is] expected to add <$110 to that monthly bill.”

Marginally higher rents won’t be a problem for Amazon employees making $150,000 a year. But Moret’s analysis does not address how the project will impact affordability for lower-income residents of Northern Virginia. But he does note that Arlington, Alexandria and the Virginia Housing Development Authority have committed to building 2,500 affordable housing units in the area over the next 10 years.

While I have raised several concerns about the project, I have to credit Moret and his team with anticipating major potential objections and structuring the deal in order to address them.

And there is one huge benefit that Moret’s presentation alludes to only in passing — the contribution of Amazon to Northern Virginia’s innovation ecosystem. The presence of Amazon means more than 2,500 jobs. It holds out the potential to rev the region’s entrepreneurial engines. And there is no way to put a monetary valuation on that.