Debunking Another Junk Study from the Left 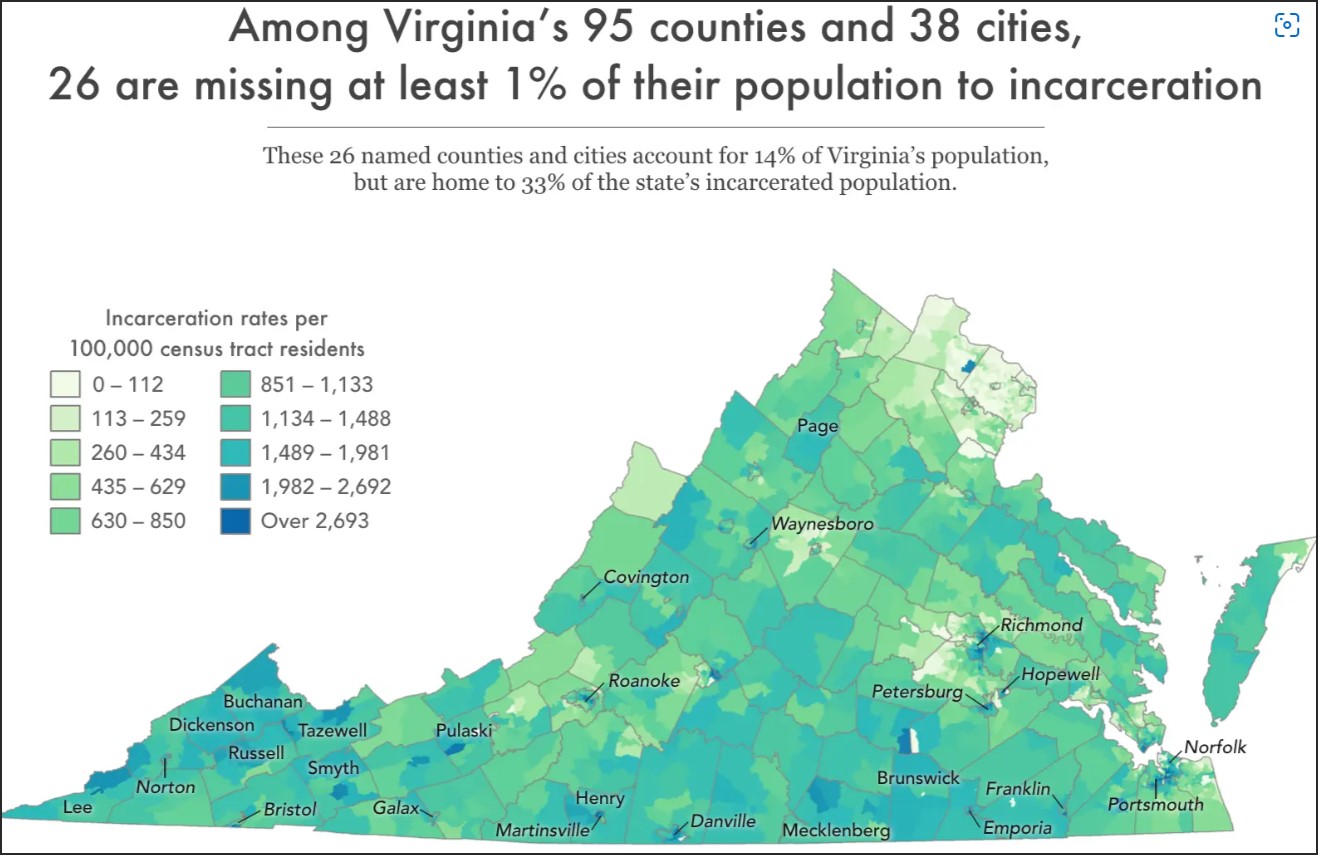 The Prison Policy Initiative, a group dedicated to exposing “the broader harm of mass criminalization,” has published data detailing the incarceration rate of communities across Virginia. Among Virginia’s 95 counties and 38 cities, 26 are missing at least 1% of their population to incarceration, finds “The geography of mass incarceration in Virginia.”

Among the more notable findings: while the cities of Norfolk and Richmond send the largest numbers of people to prison, less populous localities — Martinsville, Petersburg, Franklin, Buchanan, Lee, Dickenson and Brunswick — are missing a larger share of their populations. Moreover, within localities incarceration rates differ widely by neighborhood.

The data is interesting and potentially useful, but the analysis that accompanies it is atrocious. If the numbers prove anything, it’s that “mass incarceration” knows no racial boundaries. The poverty-ridden Appalachian counties of Lee, Buchanan and Dickenson are overwhelmingly White. But the authors slight that obvious fact in favor of linking incarceration with “systemic racism.”

This passage is typical: “Decades of systematic oppression and divestment from these poorer communities of color — which we know are overpoliced — have left these historically redlined communities particularly vulnerable to Virginia’s modern-day reliance on mass incarceration.”

Where do I begin?

I’d like to know what kind of “disinvestment” the Prison Policy Project is talking about. Is it referring to the trillions of dollars spent on welfare programs over the past half century — SNAP (once called food stamps), TANF (temporary assistance for needy families), Medicaid, Obamacare,  Earned Income Tax Credits, nutrition for women, infants, and children (WIC), public housing and rental assistance, disability assistance, Pell grants for low-income students, child nutrition in schools, Head Start, job-training programs for the poor, subsidized child care, free transit fares for the poor, and energy assistance programs for the poor, not to mention the infamous Obamaphones? That “disinvestment”?

Or does the study refer to financial disinvestment in businesses and real estate — like the $72 billion requested this year for the Department of Housing and Urban Development (2023)? Or the $57 billion spent by state and local governments (2019)  on housing and community development? Or the billions in Small Business Administration loans handed our preferentially to minority firms? Or the billions spent by the nonprofit sector on rehabbing housing for the poor, especially the urban poor? That disinvestment?

Or does the study refer to private-sector disinvestment? Like when middle-class “gentrifiers” move into poor neighborhoods, pour money into upgrading the housing stock, and support local retail establishments that support local jobs? Oh, that’s not “disinvestment,” it’s investment. But Prison Policy Institute’s fellow travelers on the left usually describe that as just another manifestation of racism.

According to the Crime in Virginia 2021 report there were three times more Black homicide victims in 2021 than White victims — 323 Blacks and 104 Whites — even though Whites in Virginia are three times more numerous. Likewise, Blacks were more likely to be victims of aggravated assaults than Whites — 3,764 reported Black victims versus 3,217 White. The same pattern extends to property crimes, although the numbers are less lopsided: 21,000 White larceny victims versus 20,300 Black larceny victims; 2,500 Black victims of motor vehicle theft versus 2,100 White victims. What are police supposed to do — ignore 9-1-1 calls in Black neighborhoods (and trigger charges of under-policing that favors White neighborhoods over Black)?

Absentee fathers. Another thing we’re told is that all those people in jail and prison (mostly men) undermines the family structure in poor neighborhoods.

“When you remove this many people from an area it fundamentally changes the fabric of that community,” Mike Wessler, spokesperson for Prison Policy Initiative, told The Virginian-Pilot, which uncritically accepted every premise of the PPI study in its article. “It means you have families that are missing members who played an integral part in the emotional and economic well-being of their households. It weakens the community overall.”

To be sure, there must be devoted fathers among the tens of thousands of men residing in Virginia jails and prisons. But how many? Nobody knows, certainly not the authors of the Prison Policy Project study, who offer no evidence to support their proposition.

Here’s what we do know: high-crime neighborhoods also tend to be neighborhoods with extraordinarily high out-of-wedlock births. Few residents of these neighborhoods (either White or Black) get married. Relationships are far more provisional and transient. Sexual relations can be so casual that women often don’t know the paternity of their children. Paternal neglect of their children (or alleged children) is widespread. And abuse and neglect of children at the hands of live-in boyfriends and “step fathers” is rampant.

What would happen if the jails and prisons were emptied? Perhaps some men would return to their families to become caring fathers. How many would just remain peripherally engaged with their children? And how many would move in with a girlfriend and become abusive toward her children? Would the net result of such an emptying be positive of negative? Would lower-income children experience more trauma or less? The answers are unknowable because no one even poses the questions, much less develops methodologically sound mechanisms to measure the phenomenon.