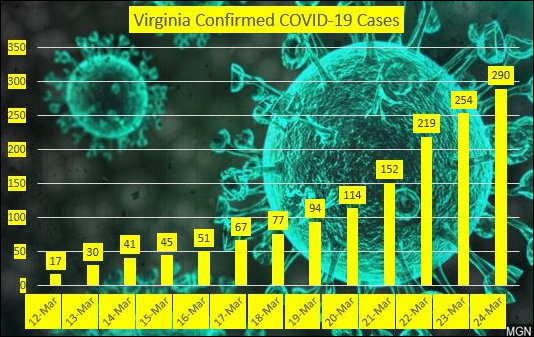 Yesterday I speculated, based on the Sunday numbers (reported yesterday) from the Virginia Department of Health, that maybe, just maybe, the acceleration in the spread of the COVID-19 virus in Virginia was slowing down — the number of cases was still increasing, but the rate of increase was slowing. It other words, it was not going exponential. Now comes today’s data, based on Monday numbers, and it looks like the same story.

Let’s look at the number of new cases reported each day. 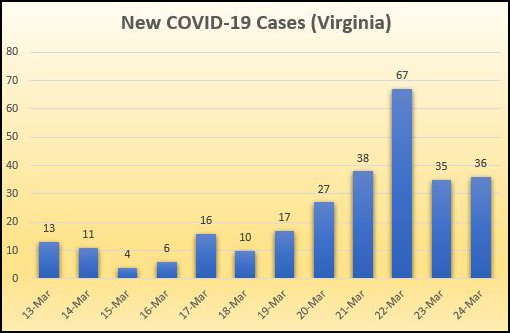 There was a period between March 18 and March 22 when it looked like the virus was going… well, going viral. Then the new cases unexpectedly dropped. Maybe the last two days’ numbers are an aberration. But maybe they’re not. Maybe the spread of the virus in Virginia — for whatever reason — is slowing.

The numbers reflect more testing than ever — 773 tests yesterday, double the number of the day before, so the scarcity of testing kits is not a factor. Indeed, fear of the virus appears to be outpacing the reality of it. Up through March 22, 6.9% of all those tested were found to have had the virus. Yesterday, March 23, only 4.9% tested positive.

It’s easy to second-guess the decisions of the guy in charge. I don’t want to do to Northam what CNN and MSNBC are doing to President Trump. But it is important to be acutely sensitive to the economic consequences of the emergency measures, and if there is any indication that we have room to lighten up, we should. The numbers from the past two days do not appear to support Governor Ralph Northam’s decision yesterday to clamp down tighter on schools and businesses. We’ll see.. I’ll continue my daily updates and inexpert commentary, counting on readers to set me straight.

21 responses to “COVID-19 Update: From Exponential Increase to Arithmetical?”