Changing the Rules for Absentee Ballots 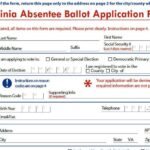 The Virginia State Board of Elections is proposing to disregard and nullify the statutory requirement that absentee ballots must be postmarked on or before the date of the election.  This proposed administrative action makes a mockery of Virginia election law and is an appalling assault on the rule of law.

The Virginia State Board of Elections is proposing a rule (1VAC20-70-20. “Material omissions from absentee ballots”) that includes the following provision:

F. The [absentee] ballot shall not be rendered invalid based on a missing or illegible postmark if the ballot is received by the general registrar’s office by noon on the third day after the election pursuant to § 24.2-709 of the Code of Virginia but the return envelope does not have a postmark, or the postmark is missing or illegible.”

On the Virginia Regulatory Town Hall page, the State Board of Elections posted an explanation of its proposed action, and has the nerve to state “The new subsection (F) clarifies that a missing postmark is an immaterial omission . . . .”

Clarification?  Nonsense. The proposed change is contrary to the plain language of the relevant Virginia Code provision.

“Any ballot returned to the office of the general registrar in any manner except as prescribed by law shall be void.”  (emphasis added)

“Notwithstanding the provisions of subsection A, any absentee ballot (i) returned to the general registrar after the close of the polls on any election day but before noon on the third day after the election and (ii) postmarked on or before the date of the election shall be counted pursuant to the procedures set forth in the chapter if the voter is found to be entitled to vote.”

The proposed rule is not a clarification of the Virginia Code provisions.  It brazenly disregards that (1) any ballot not complying with the Virginia statutory requirements is VOID; and (2) the postmark requirement for absentee ballots is unambiguous, mandatory and not discretionary.

The State Board of Elections has no authority to disregard or refuse to follow a provision of the Virginia Code.  The Board of Elections is not exempt from Virginia Constitution, Article I, Section 7 (“Laws should not be suspended.”) The proposed rule does not “clarify” the election statute, but brazenly seeks to suspend and vitiate the statutory requirement of a postmark through the pretext of administrative “clarification.”

The proposed rule also constitutes an impermissible usurpation of the General Assembly’s legislative powers, in violation of Virginia Constitution, Article III, Section 1 (“Departments to be distinct.  The legislative, executive, and judicial departments shall be separate and distinct, so that none exercise the powers properly belonging to the others . . . .”) A “clarification” that seeks to eliminate or vitiate a statutory requirement is a flagrant effort to rewrite or repeal that statutory requirement, a power that rests with the General Assembly.

Promulgation of the proposed rule also would violate the oath of office taken by the members of the State Board of Elections pursuant to Virginia Code § 49-1, which requires them to support the Virginia Constitution and “faithfully and impartially discharge” their duties.

There is no plausible reason to justify the propose rule as necessary to ensure Virginians  can participate in the election. Given the 45 days that Virginia voters have to cast their ballots  and the ease with which it is possible to submit an absentee ballot (with postmark) in a timely manner, it would be risible and an insult to law-abiding Virginians to suggest that the statutory postmark requirement should be disregarded in order to give Virginians an opportunity to vote.

Finally, if the State Board of Elections promulgates the proposed rule and gets away with it, the rule of law in Virginia will be replaced by the arbitrary fiats of administrative officials using “interpretations” and “clarifications” to disregard or nullify any statutory provision of Virginia law that they disagree with, dislike, or simply wish to avoid complying with.

This entry was posted in Electoral process and tagged Guest contributors. Bookmark the permalink.