Portsmouth has a lot of problems. Look for them to get worse in February when its new casino is scheduled to open.

A key thing you need to know about the casino is that it is the realization of Louise Lucas’ vision. Senator Lucas has spent 22 years promoting a casino in Portsmouth. As if that was just the thing Portsmouth needed to become a successful city.

Her vision was clarified by nearly $50,000 in campaign donations from casino interests.

Introduced in January 2019 by Lucas, Virginia Senate Bill 1126 earmarked commercial casinos for the towns of Bristol, Danville, and Portsmouth. The legislation also permitted the Pamunkey Indian Tribe to build Native American casinos in Richmond and Norfolk.

Rivers Casino Portsmouth is scheduled to open in February, just across the water or through the tunnels here in South Hampton Roads from the new casino in Norfolk that will open in 2024.

Both were teed up by a Joint Legislative Audit Review Committee (JLARC) study required by that legislation prior to the votes of the citizens of those five locations.

The site-specific study done for JLARC by the Innovation Group projects the casino in Norfolk will generate only slightly more revenue than the one in Portsmouth. It forecasts that in 2025, the Norfolk casino would produce about $150 million in total revenue and the Portsmouth site $130 million. END_OF_DOCUMENT_TOKEN_TO_BE_REPLACED

Local referenda, while important locally, are often overlooked in the media coverage of elections. However, the results of those elections may provide some insight into the mood of the electorate, at least in some areas of the state. Following is a summary of the results of the local referenda on the ballot last Tuesday.

In addition, referenda are allowed or required on a variety of policy questions.  This year there were referenda on the levying of additional sales tax, establishment of gambling enterprises, and replacement or relocation of monuments. END_OF_DOCUMENT_TOKEN_TO_BE_REPLACED 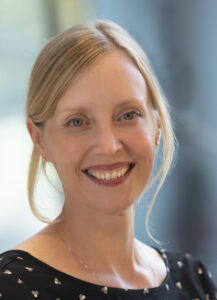 In the first six months of 2021, individuals requesting help for gambling-related problems made 394 phone calls to the Virginia Problem Gambling Helpline. That compares to 335 intakes in all of 2020, and 311 intakes in 2019 — meaning the Commonwealth is seeing a significant increase in call volume made by individuals with gambling problems or family members who are concerned for them.

The increase in help-seeking phone calls corresponds with the expansion of gambling availability within the Commonwealth. Data from other states suggests that when gambling expands, rates of problem gambling tend to rise, although these often level off. Most importantly, it signifies an urgency need to grow a network of professionals to treat this rising need. END_OF_DOCUMENT_TOKEN_TO_BE_REPLACED

We know what is going to happen.

He plans to tell the federal government that additional people, mostly poor and Black, are going to suffer and die from mental illness and substance abuse because we legalized marijuana, casinos and sports betting.

But apparently we did it for a good cause — equity — or so some say.

The opening statement of that draft application reads:

The unprecedented COVID-19 pandemic and the resulting health impact, uncertainty, social isolation, and economic distress are expected to substantially increase the behavioral health needs of Virginians. Increased alcohol, substance use, including increased overdose rates are key concerns, as well as COVID-19 impacts already evident in Virginia.

END_OF_DOCUMENT_TOKEN_TO_BE_REPLACED

Minority small business owners operating under the name “Virginia Small Businesses for Skill Games” are calling on Governor Ralph Northam to amend legislation to keep the game terminals in bars, restaurants and convenience stores. Casinos, which are years away from opening in the four localities where they have been approved, have lobbied to eliminate the slot machine-like terminals which would compete with their franchises. END_OF_DOCUMENT_TOKEN_TO_BE_REPLACED

A Break from COVID — Gambling

The Governor is in a tug-of-war with his Democratic colleagues in the General Assembly. The objects of their contention are the so-called “skill games” (also sometimes called “gray machines”).

The skill games are video games now found in numerous truck stops and convenience stores that offer a cash prize to the winners. The opponents of such games have denounced them as illegal gambling. One Commonwealth’s attorney has charged the distributor of such games for violating Virginia law. The games’ distributors contend they are games of skill. END_OF_DOCUMENT_TOKEN_TO_BE_REPLACED

It’s not called the OLD Dominion for nothing. Virginia has lagged the nation in allowing legalized casino gambling. This is especially noteworthy since the United States doesn’t have a very tolerant attitude toward legalized gambling compared to other countries. In other words, Virginia has been a laggard within a lagging nation. That is changing. As of 1997 only two US states allowed legal casino gambling. Today 43 US states have operating casinos.  Virginia is not among those 43 states. Is anybody surprised? However, legislation passed in 2019 will change that. It seems very likely that Virginia will be joining the modern world of legalized gambling in 2020 (and beyond). The biggest barrier to Virginia casinos opening in 2020 is the bureaucracy of our state government. More on that in a moment. First, let’s review a brief history of legalized gambling in the Old Dominion.

END_OF_DOCUMENT_TOKEN_TO_BE_REPLACED

Virginia Tax On Racinos Among Lowest in U.S.

If Virginia is going to sell its soul, we should at least get the market price.

The Virginia Racing Commission is starting to publish monthly reports on the cash flow to Colonial Downs and to the government under the new state-granted monopoly to operate gambling dens.  Any relationship to horse racing in these establishments is just an elaborate ruse, although there is this interesting new word in the industry: Racinos.

The April, May and June reports, which you can find here, track the slow roll opening of the slot machine facilities in Vinton, Richmond and at the main racetrack site in New Kent County.  Only the June report picks up some of the operation at the facility just opened on Midlothian Turnpike in Richmond, the excitement captured by this Richmond Times-Dispatch account.  END_OF_DOCUMENT_TOKEN_TO_BE_REPLACED 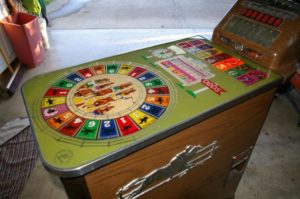 The Sport of Kings apparently cannot survive today unless between races the peasants are pumping their copper into slots.

The Tax on the Mathematically Challenged 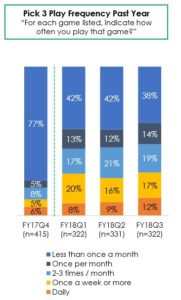 Untold thousands of Virginians just poured their money into the recent multi-state Mega Millions drawing won by someone in California.  Governor Jerry Brown sends his thanks for his cut.  But based on a recent news release our own governor is also very pleased with the performance of the Virginia Lottery as it approaches its 30th anniversary.

As with any other game of chance, the house has many ways to win.

Years of debate in the General Assembly led to a November 1987 lottery referendum, which passed with about 57 percent in favor.  The games started less than a year later.  According to information on the Virginia Lottery website, and plugging in the unaudited totals from fiscal year 2018, over 30 years the lottery has: