A Break from COVID — Gambling 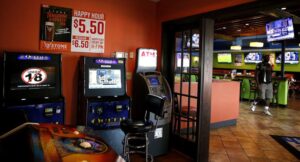 The Governor is in a tug-of-war with his Democratic colleagues in the General Assembly. The objects of their contention are the so-called “skill games” (also sometimes called “gray machines”).

The skill games are video games now found in numerous truck stops and convenience stores that offer a cash prize to the winners. The opponents of such games have denounced them as illegal gambling. One Commonwealth’s attorney has charged the distributor of such games for violating Virginia law. The games’ distributors contend they are games of skill.

Whatever they are, they seem to be pulling money away from the Virginia Lottery, the profits of which are funneled to K-12. The estimate of Lottery profit losses vary from $40 million annually to $125 million over two years. On the other hand, the businesses in which these games are placed say the games have been an economic godsend, both from the revenue they get from the game distributors and the business they get from customers coming in to play the games. One owner of two truck stops and 26 convenience stores in Southside Virginia estimated that the loss of the video games would cost him $600,000 annually.

To provide some perspective on the widespread presence of the video games, the largest distributor has approximately 7,500 devices in 2,500 locations in Virginia.

To make up the revenue loss for the Lottery, the Governor proposed that video games by regulated by the Lottery Department with a tax of 35% of all gross profits  levied on the distributors. Of the revenue collected, 94% would be dedicated for public education. (HB 1589) The Governor’s introduced budget included an appropriation of $125 million for the biennium for the revenues resulting from this legislation.

The reason for the opposition is not clear. Senator Janet Howell, D-Fairfax, chair of the Senate Finance Committee, said only, “We have pretty much made a policy decision that we are not going to do gray machines this year. We’re not ready yet for these machines. We haven’t finished negotiating. We don’t have the regulatory structure. At this point, I think the proper [way forward] is a total ban.” That comment ignored the proposal for regulation in the Governor’s bill.

But the Governor is not willing to throw in the towel. He has returned HB 881 to the General Assembly, proposing a substitute bill that would allow video games to remain in place until July 1, 2021. During that time, each distributor of a video game (called “skill game” in the substitute bill) would be required to pay a tax of $1,200 per month for each game provided for play in Virginia. The proceeds of the tax would be distributed as follows: Two percent to a new Problem Gambling Treatment and Support Fund; 2% percent to the ABC Authority to cover administration and implementation costs; 12% to the localities in which the games were located; and 84% to a special fund for the “purposes of responding to the Commonwealth’s needs related to the Coronoavirus Disease of 2019 pandemic.”

Based on what I have heard, Democratic leaders, especially in the House, do not like this move by the Governor at all. It will be interesting to see what happens on Wednesday at the reconvened session.

Why not video games? There was the excuse that they take money away from the Lottery, and, by extension, from education. But the whole idea of the Lottery money going to education is a sham. The Lottery proceeds just replace general fund money that would have been otherwise used for education. Furthermore, the Governor’s original bill would have taxed video games and channeled the funds to K-12.  So, that is not a valid explanation for the ban.

Another excuse I have heard is that the video games are too prevalent, too widespread. The General Assembly wants to regulate them. (That is sort of what Sen. Howell is saying.) But, one can hardly turn around without bumping into a Lottery dispenser. And the legislature just enabled the Lottery to sell tickets on-line! How more widespread can you be?

Finally, there has been a suggestion in news reports that the casino owners who were vying for authorization to locate in Virginia were lobbying for banning the video games in order to “provide a level playing field for potential competition.”  Ah, a plausible explanation. Good, old-fashioned business lobbying. The video games folks got out-lobbied (and outspent) by the big boys.

This entry was posted in Gambling, General Assembly and tagged Dick Hall-Sizemore. Bookmark the permalink.