Portsmouth has a lot of problems. Look for them to get worse in February when its new casino is scheduled to open.

A key thing you need to know about the casino is that it is the realization of Louise Lucas’ vision. Senator Lucas has spent 22 years promoting a casino in Portsmouth. As if that was just the thing Portsmouth needed to become a successful city.

Her vision was clarified by nearly $50,000 in campaign donations from casino interests.

Introduced in January 2019 by Lucas, Virginia Senate Bill 1126 earmarked commercial casinos for the towns of Bristol, Danville, and Portsmouth. The legislation also permitted the Pamunkey Indian Tribe to build Native American casinos in Richmond and Norfolk.

Rivers Casino Portsmouth is scheduled to open in February, just across the water or through the tunnels here in South Hampton Roads from the new casino in Norfolk that will open in 2024.

Both were teed up by a Joint Legislative Audit Review Committee (JLARC) study required by that legislation prior to the votes of the citizens of those five locations.

The site-specific study done for JLARC by the Innovation Group projects the casino in Norfolk will generate only slightly more revenue than the one in Portsmouth. It forecasts that in 2025, the Norfolk casino would produce about $150 million in total revenue and the Portsmouth site $130 million.

But you would be hard-pressed to find more than a few people who live here in Hampton Roads who believe that will be the revenue split ratio. Or anything close to it.

The Innovation report reports that it measured “Attraction Factors” and included them in its modeling.

Attraction factors can be based on a number of components including branding, the level and effectiveness of marketing efforts, and the level of quality and amenities of a facility. Attraction factors are also adjusted to model the presence of natural and man-made boundaries which impact ease of access and convenience of travel in the market area.

Compare the two site plans. They are seven miles apart. What you see is what the two cities may get. 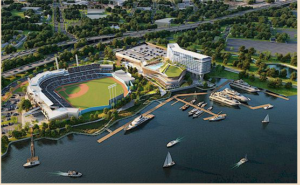 The Norfolk casino will feature up to 3,000 slot machines and 150 table games, and the hotel will offer 300 guest rooms and suites. That is Harbor Park, the home of the Orioles AAA baseball team, and Norfolk Harbor next to the casino/hotel complex. 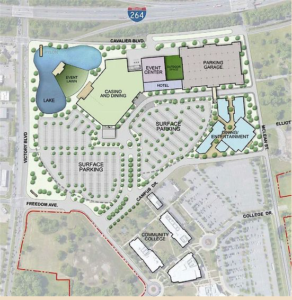 The Rivers Casino Portsmouth is not on a river.  It is being built at I-264 and Victory Blvd next to Tidewater Community College. It is master-planned to allow for a hotel. But the development agreement between the developer and Portsmouth does not require the development of a hotel.  Whether one will ever be built on that site depends upon casino revenue. If one is built, it will have a great view of the community college and the parking lots.

Attraction factors? But enough on that.

Portsmouth. How about city governance? Norfolk has its issues, but, against stiff competition, Portsmouth is the “sick man” of Virginia.

To illustrate, Portsmouth is on its fifth police chief in four years. Crime? Just what you think. Tourism? Why?

Even people staying and/or dining on the Portsmouth waterfront can take the ferry to Norfolk and back without getting into their cars. They run every 15 minutes until nearly midnight.

I could go on and on, but you get the idea. Chaotic policing, inflation, a recession and a new casino. Portsmouth.