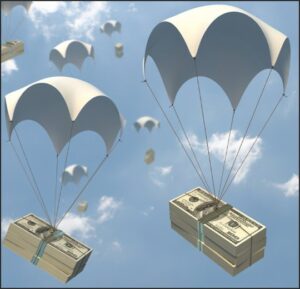 The big news of the week was President Biden’s announcement that he was canceling a lot of student higher education debt. #IsItLegal?
Here are three non-judicial-branch reactions to the Biden plan:

The loan-forgiveness decision is even worse. Widely canceling student loan debt is regressive. It takes money from the broader tax base, mostly made up of workers who did not go to college, to subsidize the education debt of people with valuable degrees. Though Mr. Biden’s plan includes an income cap, the threshold does not reflect need or earnings potential, meaning white-collar professionals with high future salaries stand to benefit….

Mr. Biden’s student loan decision will not do enough to help the most vulnerable Americans. It will, however, provide a windfall for those who don’t need it — with American taxpayers footing the bill.

Pouring roughly half trillion dollars of gasoline on the inflationary fire that is already burning is reckless. Doing it while going well beyond one campaign promise ($10K of student loan relief) and breaking another (all proposals paid for) is even worse.

The Wall Street Journal  Ed. Board:

Worse than the cost is the moral hazard and awful precedent this sets. Those who will pay for this write-off are the tens of millions of Americans who didn’t go to college, or repaid their debt, or skimped and saved to pay for college, or chose lower-cost schools to avoid a debt trap. This is a college graduate bailout paid for by plumbers and FedEx drivers.

When you’ve lost WAPO, WSJ, and Obama’s Chair of the CEA…

Can you imagine the reactions of governors and state legislatures? #HigherEdFunding #TheyDon’tVoteForUs

Speaking of moral hazards…who can forget CNBC’s Rick Santelli’s epic February 2009 rant from the floor of the Chicago Mercantile Exchange on the subprime mortgage bailouts:

It launched the Tea Party movement which was the likely precursor to national populist movements across the country and globe. That eventually culminated, in America, as the MAGA/Drain the Swamp movement with the election of Donald Trump.

In poll after poll, cross tabs have shown that the global political realignment is economic, not ideological. Often times in America, our culture, and the resulting behavior of the two political parties, has been defined by the classic Haves vs. Have Nots.

Today, the Haves have a college degree and better lifetime earnings while the Have Nots have not a college degree and have not higher lifetime earnings. The resulting Have economic mobility, or Have Not, has created hollowed-out rural economies bereft of talent, which flees, or already fled decades ago, to sprinklered suburban lawns or urban centers of consolidated capital.

The division is not only economic but deeply emotional for those left behind. #Resentment

And when those Have Nots are hectored at by the cultural coastal elites, they will get behind anyone or anything who will fight for them. If you don’t get that then you cannot comprehend why so many fervently support Donald Trump. It ain’t about Trump. In the end, we do things for ourselves.

Or as J.D., our drywall dust-covered contractor with “it wasn’t for me” one semester of college under his belt, so succinctly put Biden’s plan, “I think it’s bullshit.”

J.D.,26, has a “Don’t Tread on Me” license plate and no knowledge of the aforementioned Tea Party movement. But he did share with me from his smartphone a Facebook post that noted how college loans are being forgiven but contractor loans are not, all while he is working… in his words, “to get by.”

Chris Saxman is executive director of Virginia FREE. This column has been republished with permission from The Intersection.

This entry was posted in Education (K-12), Federal and tagged Chris Saxman. Bookmark the permalink.