The Newest Entitlement for a Morally Bankrupt Nation 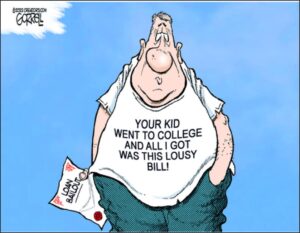 This is it: the final straw. I’ve had it. I’m ready to (figuratively) burn the place down.

President Joe Biden has moved to cancel student-loan debt for 43 million borrowers in an initiative that the Wharton School of Business estimates could cost taxpayers $300 billion over the next ten years. Students from low-income families qualifying for Pell grants would get $20,000 in debt forgiveness while others would be forgiven $10,000.

This action is wrong on so many grounds that I barely know where to begin. As some have observed, the primary beneficiaries of forgiveness are America’s educated elites. Americans in blue collar occupations get nothing from this arrangement. The move also rewards deadbeats by offloading bad-debt burden to taxpayers. Those who made sacrifices to retire their debts take up the slack through their taxes for those who couldn’t or wouldn’t pay off their loans.

The Biden administration is effectively transforming student loans into another income-transfer entitlement benefiting debtors and the higher-ed institutions that enabled their debt at the expense of taxpayers and those who honor their debts. This is more than a fiscal outrage. It is a moral outrage.

According to the Biden administration, the initiative will “reform” student loan repayments to make college more affordable to low- and middle-income borrowers by creating “income-driven repayment plans” based on a borrower’s discretionary income. This means, in effect, that the federal government will subsidize students borrowing money to earn degrees with little market value. Students can indulge in dance, feminist theory, post-modern critical studies, or whatever, secure in the knowledge that Uncle Joe will bail them out of their poor decisions.

As far as I can tell from the White House Fact Sheet, there is nothing that requires colleges and universities to depart from Business As Usual. The fact sheet does say that colleges “have an obligation to keep prices reasonable and ensure borrowers get value for their investments, not debt they cannot afford.” The Biden administration claims to have taken “key steps” toward that goal but does not enumerate them.

Whatever adjustments colleges and universities will be required to make, it’s safe to say they will continue admitting students who are poor credit risks. College drop-outs will continue to number in the hundreds of thousands. Thousands more students will continue borrowing money to pursue majors with minimal market value. And higher-ed institutions will continue to admit students at any cost to generate revenue to pay for their bloated administrations, Taj Mahal facilities and commitment to “social justice.”

Yes, that last part is perhaps the worst. As we have documented on Bacon’s Rebellion, many Virginia colleges and universities have taken on the mission of facilitating social justice — informed, of course, by their left-wing sensibilities, which means discrediting the founding fathers and the principles this country is built upon.

It’s bad enough that the cost of attendance has gotten so unaffordable. Here is the Biden administration chart showing the growth trend: 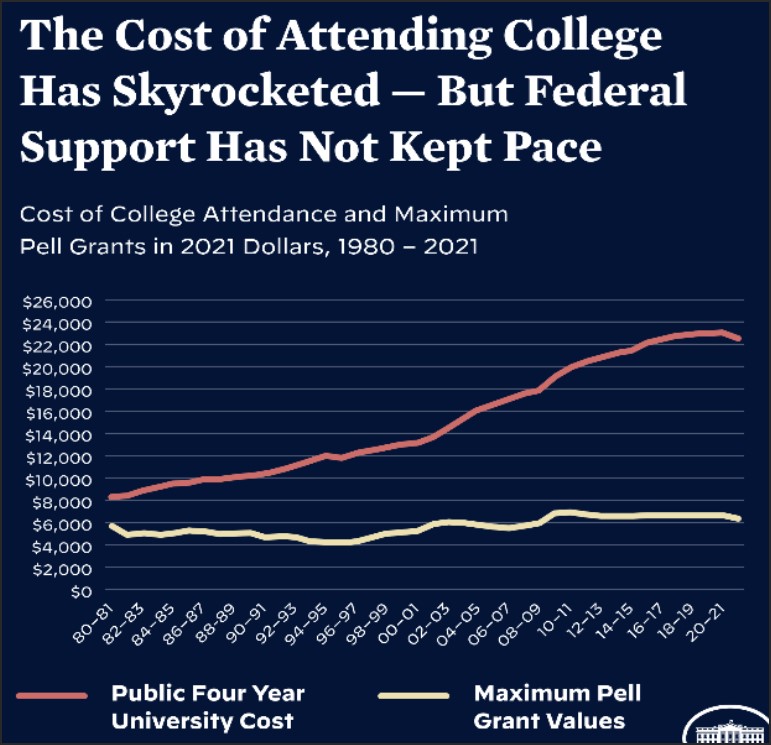 It’s bad enough that Virginia’s public universities have created intellectual monocultures — environments where non-leftists are afraid to express themselves openly, and dedicated themselves institutionally to the cultivation of grievance, victimhood and envy under the name of “social justice.” (The great irony, of course, is that universities themselves are systems of hierarchical privilege that reward those at the top of the power structure and exploit those at the bottom.)

I have warned about these trends frequently on Bacon’s Rebellion.

Now I’ll be expected, as a taxpayer, to subsidize this dysfunctional, parasitic, and intellectually bankrupt system. Well, to be technically accurate, I probably won’t have to pay higher taxes. The $300 billion cost will be added to the national debt over the next 10 years, fueling long-term inflationary pressures and accelerating the nation’s pall mall rush toward hyper-inflation or insolvency or both.

I refuse to subsidize the destruction of the way of life I hold dear. Increasingly, I’m of a mind that America’s — and Virginia’s — higher-ed system has little left that’s worth preserving. We need to defund the putrefying husks of established colleges and universities and fund the creation of parallel institutions for job training, higher education, and research. The fate of the country depends upon it.