Cancel Your Print Subscription, Save a Bundle, and Support Intellectual Diversity in Journalism 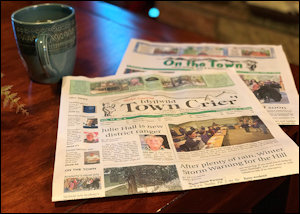 Newspapers with breakfast. End of an era.

I cut the cord today — I stopped subscribing to the print edition of the Richmond Times-Dispatch. I’d been delaying the inevitable for a long time, but a 50-year habit of reading the newspaper over breakfast and coffee was hard to break.

Here’s what did it for me: The print-digital subscription is $70 per month. The digital-only subscription is $12 monthly. What am I getting for the extra $58 a month? Almost nothing. (My wife will miss the puzzles, but she’ll get over it.) When it came time to re-subscribe, I realized I could save almost $700 a year. To me, that’s not chump change.

That got me to thinking…. Bacon’s Rebellion readers, you can do it, too!

If you’re tired of subsidizing a publication whose news articles reflect a steadily constricting view of the world — the liberal/progressive worldview of newsroom editors and writers — stop being a doormat. Speak out in the only way that will make an impression. Cancel your print subscription. Then take half the money you save, donate it to Bacon’s Rebellion, and support intellectual diversity in Virginia media.

This entry was posted in Blogs and blog administration, Media and tagged James A. Bacon. Bookmark the permalink.

48 responses to “Cancel Your Print Subscription, Save a Bundle, and Support Intellectual Diversity in Journalism”