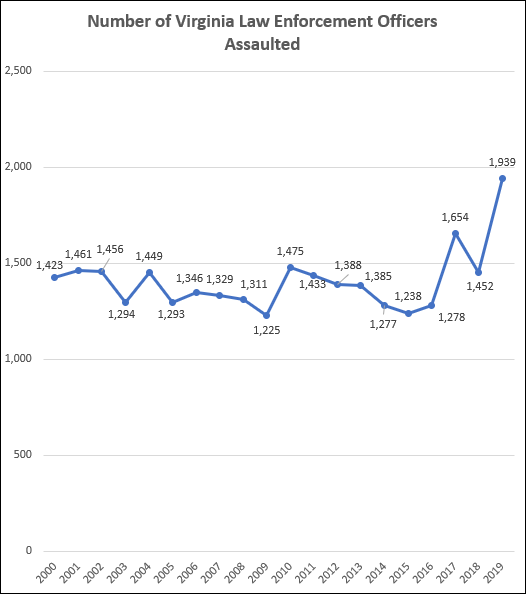 So, the nation is in an uproar again, this time over the shooting death of Rayshard Brooks by a white police officer in Atlanta after Brooks resisted arrest, grabbed the officer’s taser and turned it on him. While this incident, like every other episode fueling the Black Lives Matter movement, occurred outside the Old Dominion, Virginians are wrestling with the same set of issues regarding the police use of force, particularly in their interactions with African-Americans.

Largely missing from the discussion — certainly here in Virginia — are the risks that police officers encounter when dealing with the public. The data shown above, taken from Virginia State Police “Crime in Virginia” reports show dramatic increases in the number of assaults on police officers in 2017 and 2019. Last year, the number of assaults reached 1,939 — by far the greatest number of incidents of any year since the state police settled upon consistent reporting methodology in 2000.

In doesn’t take a PhD in criminology to understand that police officers are routinely placed in highly stressful and unpredictable situations. A useful measure of how frequently those situations arise is the number of incidents in which police are assaulted. The data show that the number of assaults reported each year bounced around the 1,200-to-1,500 range until 2017, and then headed north.

The state police data provide some clues as to what’s going on. Assaults are classified by the circumstances in which they occur. “Responding to disturbance” is consistently the most common circumstance, followed by “attempting other arrests,” “handling, transporting, and custody of prisoners.” and “investigating suspicious persons or circumstances.” 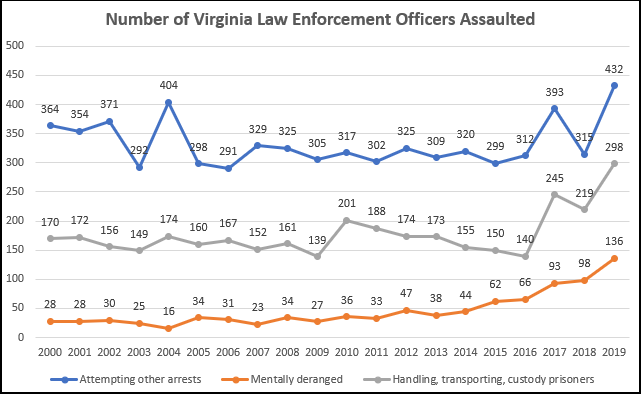 The graph above show three categories in which assaults have increased the most. From this data, we can draw these conclusions:

If someone who is mentally deranged, resisting arrest, or trying to escape custody assaults a police officer, the odds increase exponentially that the officer will respond with deadly force. Police don’t go around looking for people to kill. They respond to circumstances. In theory, if those circumstances increase in number, so, most likely, will the number of fatal incidents.

Given the controversy over the police treatment of African-Americans, it would be useful to be able to break down the assault-on-police and the police-shooting data by race. Has the increase in assaults on policemen been a population-wide phenomenon, a white phenomenon or a black phenomenon? Have African-Americans been the victims disproportionately of police shooting? If so, did the circumstances justify the shootings?

It would be useful to have this information before Virginia politicians go shooting off the lip or proposing changes to policing practices in Virginia based on suppositions with no support in reality.

This entry was posted in Crime , corrections and law enforcement, Culture wars, Race and race relations and tagged James A. Bacon. Bookmark the permalink.

25 responses to “By the Way, Assaults on Virginia Police Officers Surged Last Year”