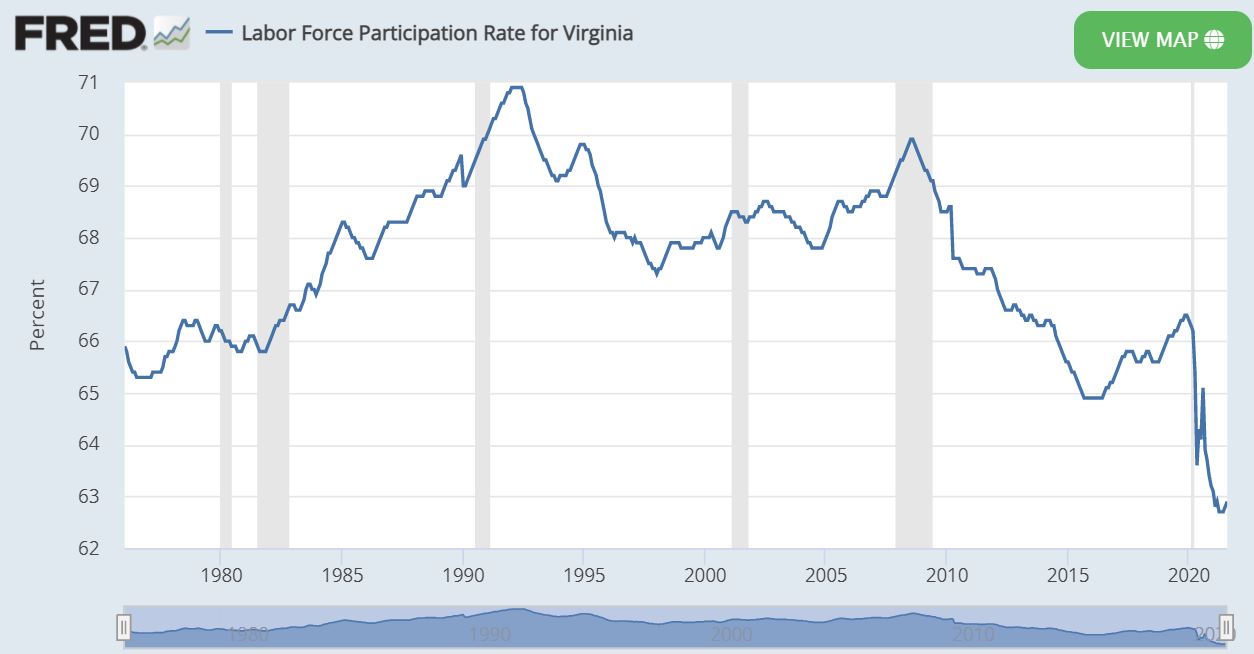 The news is full of stories about labor shortages. The latest case in point, which prompted this column, is Virginia Mercury article focusing on the paucity of nurses. The author lists several plausible reasons to explain the deficit, from COVID-related burnout to a shortage of nursing school faculty. Similarly, Bacon’s Rebellion has discussed the shortfalls in police departments across Virginia and the lack of teachers. I hear trucking companies advertising repeatedly on the radio for truck drivers, and as I look for suitable living arrangements for aging relatives, I have heard similar tales from retirement communities. Meanwhile, small businesses everywhere are reporting that they cannot find enough workers.

While observers can cite narrow-bore explanations to explain what’s happening in, say, the nursing industry, the ubiquity of the problem across all economic sectors suggests that there may be a common cause.

This graph from the Research Division of the Federal Reserve Bank of St. Louis shows the leveling off of the working age population nationally. 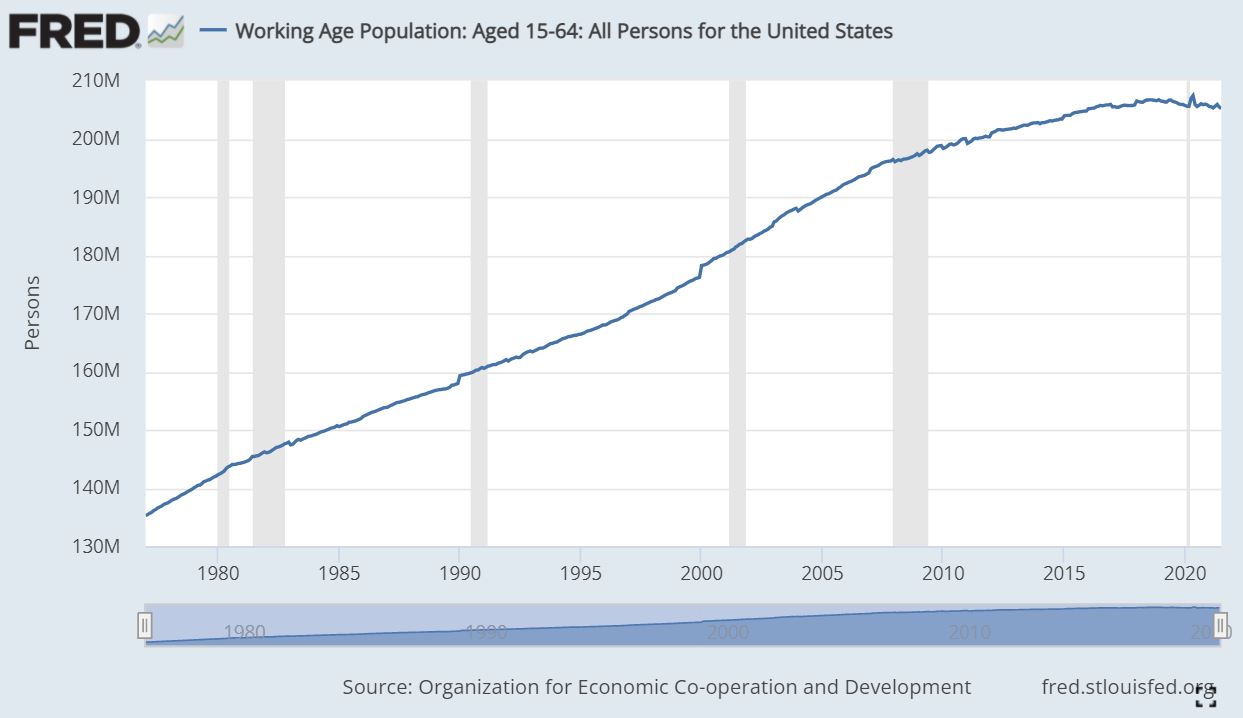 This long-predicted trend — I wrote about it in my book, “Boomergeddon,” back in 2010 — clearly is part of the explanation. But there is more to the story.

The graph atop this post, also from the St. Louis Fed, shows the marked decline in the percentage of people of working age who are participating in the labor force in Virginia. Many factors influence the participation rate, including the number of students attending college and cultural factors pushing women out of the home and into the workforce. But neither of those factors can explain the dramatic decline in Virginia’s workforce participation rate from a peak of 71% in the early 1990s to 66% pre-COVID (and 63% today).

In sum, ubiquitous workforce shortages stem from a leveling off of the working-age population and declining labor force participation. We can fix the industry-specific problems for nurses… or policemen… or home healthcare workers… or plumbers… but if all we’re doing is pulling workers from one economic sector to another, we’re not fixing the underlying problem.

One way to address the underlying problem is to let more people into the country. But there’s the drawback to that. Amidst chronic labor shortages, working- and middle-class employees have the upper hand in labor markets for the first time in decades. Inflation-adjusted wages have been stagnant since the 1970s. Finally, demand for working- and middle-class jobs is pushing up wages. (Whether wages are rising faster than inflation is another question.) If allowing an unrestricted flow of immigrants into the country (as seems to be happening now by default along the Mexican border) ameliorates the labor shortages, it also undercuts wage gains for native-born Americans.

Another approach to the labor shortage starts with analyzing why the labor participation rate has fallen so. Are people retiring early? Are more people receiving disability benefits? Did excessive federal unemployment insurance benefits encourage people to stay home during the COVID-19 epidemic? One thing we know is not the cause: It’s not a case of more people going to college. College enrollments have declined during the epidemic.

My key question: Are taxpayers underwriting indolence? When labor shortages are widespread, there is no excuse for subsidizing sloth.

Whatever the explanations, workforce shortages are likely to persist, and, barring a surge in illegal immigration or enactment of self-defeating government policy, there will be a massive and sometimes painful shift in the national distribution of income toward lower-income occupations. As long as that shift reflects voluntary renegotiations between employers and employed, not government policies enacted by Intellectuals Yet Idiots (to borrow a phrase from Nassim Nicholas Taleb), I’m OK with that.