Lee, a Study in Contradictions 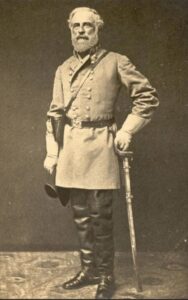 Yesterday’s edition of The New York Times contains an opinion piece — “How Do I Tell the Story of Robert E. Lee,” by Allen Guelzo a professor at Princeton University. It came to me from a colleague of his whom I casually know but respect. Guezlo is about to publish “Robert E. Lee: A Life,” and the opinion piece is about his struggle to do so fairly. His book represents seven years of effort and, as he himself states, “Lee is a study in contradictions.” Dealing with those contradictions fairly would explain a seven-year undertaking.

Guelzo makes his challenge clear with this statement: “There are some biographies that are almost impossible to write, but write them we must. Biography demands a close encounter with a subject, an entrance into motive, perception and explanation. The intimacy of that encounter carries with it the danger of dulling the edge of the historian’s moral judgment — and that kind of judgment is what makes historical inquiry worthwhile, something more than a mere jumble of events and dates.”

Guezlo brings out the point, often overlooked, that Lee believed that slavery was “a moral and political evil in any country,” but that he also believed, as did others, that blacks were better off as slaves than living in Africa. Perhaps that is how many slave owners soothed their consciences.

He makes the interesting point that Lee statues were a way of asserting dignity even in defeat and as proof that “failure was not worthlessness.” Guelzo rejects the argument of some like me that Lee’s life should be viewed in context by asserting that “context making is itself a slippery task.”

His opinion piece ends with a recognition that difficult biographies, while challenging, can’t be avoided because that “would lose the sharpness of vision that tell us the difference between the path to human flourishing and the off-ramp to disaster.”

The one part of his opinion piece that I disagree with and find surprising is Guezlo’s assertion that Lee was guilty of treason. I recognize that I represent a minority and will be judged as a Lost Cause apologist. Nonetheless, I believe that my view has a strong and plausible foundation — the Resumption Clause. Guezlo surely must have discovered in his research that In ratifying the Constitution, four states did so conditionally — New York, Rhode Island, Massachusetts and Virginia. All but Massachusetts included a Resumption Clause that reserved the right, “as sovereign states, to resume all the powers they had delegated in the Constitution.” The fact that the other states during the ratification process did not object implies acceptance of that condition. And Thomas Jefferson wrote that, “if it ever happened that some one of the original states wished to leave, they should be allowed to do so,” since the premise of the Constitution was a voluntary union.

Maybe Guezlo felt the need to go along with the traitor label to buy his peaceful life on a woke campus. If the woke philosophy didn’t infect his writing, his book may give some new insights into Robert E. Lee.

This entry was posted in Culture wars, Virginia history and tagged Bill O'Keefe. Bookmark the permalink.