Another Daily Newspaper Circles the Drain 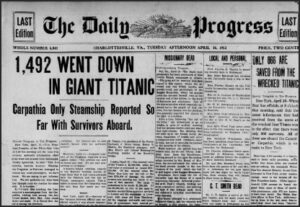 Down with the ship!

The Daily Progress, Charlottesville’s daily newspaper, no longer offers daily delivery on its website, reports WINA talk show host Rob Schilling. Potential subscribers are given only two options at the newspaper website: a digital subscription (introductory offer of $1.00 for 26 weeks) and a month of Sunday-only delivery for $21.67.

Describing the “once flourishing publication” as in its death throes, Schilling details the newspaper’s plight:

Bacon’s bottom line: I don’t know if anything can save The Daily Progress, the newspaper serving a metropolitan market of 230,000 people. Most other newspapers large and small are in the same boat. Google, Facebook and the other social media giants have figured out how to monetize local news, leaving the creators of that product nothing but the scraps. Social media are literally killing the goose that lays the golden egg. How will they generate traffic when the newspapers all fail?

The newspapers aren’t doing themselves any favors. Their value proposition stinks. Old people comprise what’s left of the shrinking market for the local news business. Old people tend to be conservative. But newspapers hire Woke reporters who want to save the world — and spit on everything old people believe, every day. I’ve never seen an industry more assiduously alienate its core market. Never.

The RTD print circulation is about 25% of what it was at its height. The rate for a full-page ad is pathetically low. The news operation runs on a skeleton staff of mostly Woke reporters who routinely offend their mostly elderly readers. The news content, like that of the Daily Progress, are pumped up with contributions from the shrinking news operations from around the state. The word I continually hear from the remaining subscribers: “I read it for the sports and the obituaries.”

What a shame. Where will we get our local news then? Instagram? TikTok?