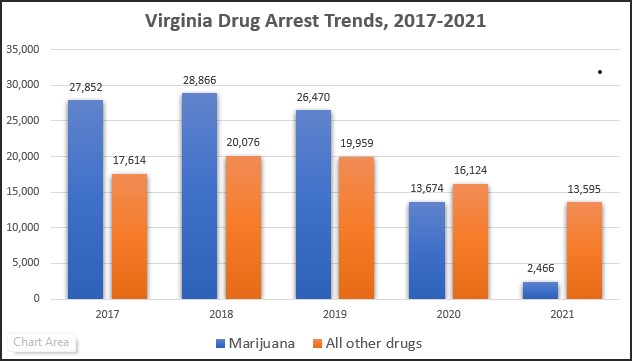 The war on drugs in Virginia — or, more precisely, the war on marijuana — is mostly over. Last year Virginia law-enforcement authorities made only 2,466 marijuana-related arrests, according to the Crime in Virginia 2021 report published by the Virginia State Police. That’s roughly one-twelfth the number of arrests made four years previously.

The law decriminalizing marijuana possession went into effect July 1, 2020. It is still illegal to distribute marijuana or possess large quantities of the drug with the intent to distribute. The Crime in Virginia 2021 report provides the first full-year statistical snapshot of the impact of the new laws.

What some might find surprising is that the number of all other drug arrests declined 32% — from about 20,000 in 2019 to 13,600 last year. Arrests for amphetamines/methamphetamines, cocaine, crack cocaine, and heroin, which peaked in 2019, all trended significantly lower since 2019. 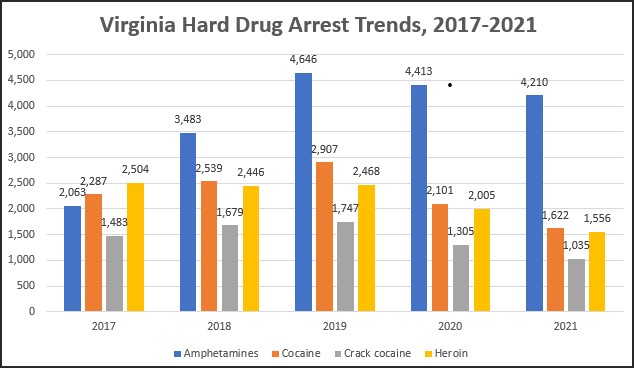 The declining number of arrests for “other” (non-marijuana) drugs raises the question of what accounts for the change. Is the use of harder drugs declining as marijuana becomes more widely available? Or have law-enforcement authorities altered their drug enforcement strategies in response to the new laws?

The scenario that most worries me is that the downturn of police vigilance against marijuana has translated into less vigorous action against the distribution and use of other drugs, some of which may be more addictive, and some of which may be laced with fentanyl. One thing we can say with certainty is that drug overdose deaths in Virginia increased 15% in 2021 from the year before — to 2,656.

The spreading import and distribution of fentanyl, a national trend, clearly is a factor in the rising overdose death count. But it is reasonable to ask if relaxed law enforcement action against drugs is a contributor.

If that’s the case — and I’m not saying it is, rather I’m raising a question worth looking into — it would be interesting to see if different racial/ethnic groups are disproportionately impacted. A major criticism of the old marijuana laws is that they were racist, as evidenced by the fact that African-Americans were disproportionately likely to be arrested. It would be interesting to know if (1) decriminalization of marijuana has led to less aggressive prosecution of the war on other drugs; (2) if less vigorous prosecution contributed to the spike in drug overdose deaths; and (3) if the drug overdose deaths disproportionately affect African-Americans.

There is reason to think that No. 3 is definitely be the case. According to the National Institutes of Health: “Non-Hispanic Black individuals in four U.S. States experienced a 38% increase in the rate of opioid overdose deaths from 2018 to 2019, while the rates for other race and ethnicity groups held steady or decreased…. These alarming data are in line with other research documenting a widening of disparities in overdose deaths in Black communities in recent years, largely driven by heroin and illicit fentanyl.”

As is commonplace these days, the “experts” blame racism. As Nora D. Volkow, director of the National institute on Drug Abuse, put it: “Systemic racism fuels the opioid crisis.”