America Is Tired of Elitism 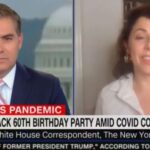 There is nothing that members of the corporate media hate more than being told they’re elites.

Thing is, they’re so elite they don’t even realize it.

It isn’t simply her job to report what’s going on in Washington, she’s also the self-appointed  defender of former presidents not named Trump.

On Sunday, CNN’s Jim Acosta took time out from attacking Florida Gov. Ron DeSantis — apparently it’s the anchor’s job to try to damage a likely GOP frontrunner for president in 2024 — to give Karni a chance to blow kisses to the Obamas.

Acosta pointed out that there was criticism of the party Barack Obama threw for himself at his Martha’s Vineyard $12 million estate Saturday night. Leaked photos showed a crowd of unmasked revelers, including Obama, dancing inside a crowded large tent.

Criticism of the party was “overblown” according to the NYT reporter.

“This is a sophisticated, vaccinated crowd,” Karni sniffed.

Here, watch for yourself:

Whoa. How did THAT slip out?

These super-rich A-listers are sophisticated. How dare the rabble comment on their behavior!

Shoot. Where are my manners? Let’s back up for a minute.

First, let me extend a belated happy birthday to former President Barack Obama who turned 60 last week and who threw a bash for himself on Saturday at his sprawling compound.

I am not being facetious. I am happy for our former president and his successes. And I honestly don’t care how many people were crammed into those massive tents on his property.

As long as you and I aren’t stuck with crowd restrictions when its our turn to have a party.

Ever since the beginning of the pandemic I’ve said that people need to take responsibility for their own actions and their own health. If an invite from a former president makes “sophisticated and vaccinated” people throw Covid caution to the wind, well so be it.

It’s a free country. Or at least it used to be.

The problem began for Obama when news of his upcoming extravaganza broke at the same time the pearl-clutching crazies at the CDC were stroking out over the Delta variant.

Backlash against the Obamapalooza was instantaneous.

So, at the last minute, it was announced that the guest list had been trimmed because of Covid. Initially the crowd was estimated to be about 475 plus 200 servers. There was no word of how many had been uninvited.

Observers photographed hordes of beautiful people heading toward Obamaland last weekend. Then one of the DJ’s posted pictures of the guest of honor dancing on a crowded dance floor. Maskless, of course.

That Instagram photo was quickly deleted, but not before screen shots circled the globe.

No sooner had the Obama party ended than Anthony Fauci made his regular rounds of the Sunday shows, telling the bikers heading to Sturgis, SD to stay home. It was too dangerous for them to gather.

Comparisons between the two events are crazy, but to ordinary folks it looks like yet another case of sticking it to the regular guy while the upper classes do whatever they please.

Let’s face it, there’s something about a biker event that really annoys the elites.

Last summer journalists twisted themselves into knots trying to cook up numbers to show that the gathering was a “super-spreader” event. The Washington Post still claims there were hundreds of cases. Yet USA Today reported that there were just 124 cases “tied” to Sturgis. With 460,000 attendees, that was an infection rate of .09%.

Nothing like Bear Week in Provincetown last month, but the elites have been curiously quiet about that one.

Americans are sick of the hypocrisy. They’re tired of being told to wear masks while getting their hair cut and then watching the Speaker of the House in her salon, maskless. They’re tired of Michigan’s governor telling everyone to stay home while she slipped off to Florida.

Gavin Newsom’s French Laundry dinner is one of the reasons Californians are about to recall him.

It’s clear that America is tired of elites. In government. And especially in the media.