Monuments to Bravery and Sacrifice, Not White Supremacy 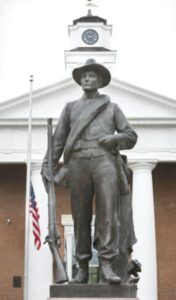 My family has lived in western Virginia since the mid-1800s. Six relatives — my great-grandfather, four great-uncles and great-great grandfather — served in the Confederate Army. Five were in the same unit, the 14th Virginia Cavalry. The sixth was in the 25th Virginia Infantry. (We suspect he couldn’t find a horse.)

In the early 1900s, the United Daughters of the Confederacy (UDC) and other groups erected statues around the South to honor the sacrifices and service of a passing generation of soldiers and sailors like my ancestors — just as their counterparts did in countless towns and cities across the North.

In the past year, having succeeded in taking down the statues to Confederate icons like Robert E. Lee and Stonewall Jackson, America’s cultural cleansers want to expunge the memory of anyone who fought for the Confederacy — no matter their rank or their reason for fighting. They claim the statues the UDC and others erected were meant to glorify the “Lost Cause” and romanticize the Confederacy. In some cases that’s probably true. It’s undeniable that the UDC glorified the Confederate cause for decades.

But some statue opponents offer another reason for pulling down all the Confederate statues: they are, and were meant to be, monuments to white supremacy.

To our west, in Charleston, W.Va., columnist John McFerrin calls for the removal of Stonewall Jackson’s statue from the state capitol grounds because he views it as a totem of white supremacy. “What story [did] Stonewall Jackson the statue tell?” when the UDC erected it in 1910, wrote McFerrin.  “[I]t announced to the world that West Virginia wanted the long, fitful progress that we had made toward a society with liberty and justice for all to stop… What better way to announce that this equal rights business had gone far enough than to honor a man who gave his life fighting that slavery might continue?”

Closer to home, Jim Bacon recently wrote about Roanoke County Circuit Court Judge Charles Dorsey ordering the county to remove a statue of a Confederate soldier from county land, because “this monument’s message, in its present location, is offensive to the appearance of judicial fairness and neutrality, without a hint of prejudice.”

The monument isn’t of a Klansman brandishing a whip. It’s not of Simon Legree or John C. Calhoun or Jefferson Davis. It’s of an infantryman with his musket. It, writes Bacon, “does not glorify the Confederacy, the ante-bellum era, or the mythology of the Lost Cause. The placard says simply that it was erected ‘in memory of the Confederate soldiers of Roanoke County.’” Yet Judge Davis deemed it “offensive,” and has ordered it removed. Bacon’s commentary on this is damning:

In effect, Dorsey is implying that all Confederate statues were erected during the early 1900s to give physical form to the Lost Cause narrative and continued oppression of Blacks. Yet he never addresses the reasons given for erecting the Roanoke County statue. He offers not one scintilla of evidence that the purpose of this particular statue was to cement the system of white supremacy. Most astonishingly, he doesn’t even cite the monument’s plaque, which recognizes the wartime sacrifices of a passing generation of veterans — fathers, uncles, grandfathers and friends. The monument is explicitly an expression of love: “Love makes memory eternal.” (Emphasis added).

If Judge Dorsey and the anti-statue crew are right, then we must assume that the people in early 20th-century Virginia who supported the erection of these statues were horrible people.

Only horrible people would raise money to build statues whose primary purpose was to make people of color feel unwelcome in their communities. As the decades passed, and future generations came to look at the statues and admire them — are we to believe that they saw them as monuments to white supremacy? Then they must have been horrible people, too. Is that what statue opponents really think?

After the Civil War, my relatives returned home. We have pictures of them and their sons, cutting wheat, binding it and stacking it in the fields. They raised successful and caring families. I’ve stood in the cabin, where my mother was born, that my great-grandfather built after the war.

I can imagine him, in his later years, going to see the newly-erected Confederate statues in and around Lexington, as did thousands of former Confederate soldiers in towns across Virginia. Do we really think that the first thing those old soldiers felt, as they looked at those statues, was warm feelings about white supremacy? No. I’m pretty sure they thought of past bravery and fallen comrades  I’m also pretty sure that they, their families and following generations of Virginians remembered lost family and friends.

Pretty soon, most of the cities and towns that don’t want Confederate statues will have removed them. If a community doesn’t want to keep its Confederate statues, we should respect that choice. A community — not an activist, even one in robes — should have the final word on what its symbols will be. But some towns may want to keep them. Will activist lawyers and legislators threaten to bury these towns with lawsuits? Will government officials and judges abuse their authority and bully those places into submission? (Much like the Northam administration and General Assembly progressives bullied VMI?)

Were there some people who saw those statues as honoring white supremacy? I’m sure there were. But they weren’t the ONLY people who honored those statues, and white supremacy was not the ONLY reason for building and respecting them. Judge Dorsey’s action, and others like it — such as the removal of Stonewall Jackson’s statue from VMI — send the message that any Confederate is unworthy of any public recognition. That’s a slap in the face to thousands of Virginians.

If you insult someone’s ancestors without a compelling and convincing reason, , that’s not a prescription for bringing people together. It’s a prescription for setting them against one another. And it’s certainly not “inclusion.”

Donald Smith, a University of Virginia graduate, is Richmond native.

This entry was posted in Culture wars and tagged Donald Smith. Bookmark the permalink.