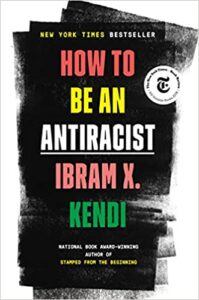 The book was one the local librarian chose to display on the new acquisitions shelf, my curiosity was high, and by all accounts some  leaders in Virginia’s educational establishment are taken with and listening to the author. So I read Ibram X. Kendi’s “How to Be an Antiracist.”

I will largely let the author, who graduated from Stonewall Jackson High School in Manassas, speak for himself below. It was possible the critics were exaggerating. His own words below indicate otherwise.

I recommend the book to anybody really interested in this ongoing debate. Is this being directly taught to K-12 school children?  I doubt it, but maybe. Is it being taught to the next generation of teachers and is it at the heart of much of current in-service teacher training? Apparently.

It and others with a similar message are clearly informing public “equity” policy from Washington, D.C. down to the county level. The central premise, often quoted elsewhere, is worth noting again:

Every unequal outcome – economic, educational, social — that can be measured must be the product of racism, he argues. Only when the outcomes are equal (equity) is the racism gone. With that assumption, then of course systemic racism remains pervasive. The assumption is key.

He recognizes and discusses arguments against the assumption but accepts none of them. He complains about black Americans who believe issues other than racism share the blame (but notes those numbers dropped with the recent police excessive force examples)

But of greater concern, to me at least, is the persistent theme that the whole notion of a color-blind society offering equal opportunity but no guarantees is not only unattainable (and we surely have not fully attained it, I agree), but not what we should even be striving for.

This particular book is at least half autobiography, and a very revealing one.  Kendi in many ways had a comfortable upbringing, with parents who were both college graduates with professions. Most of it was spent in New York City, ending up in Northern Virginia just for the end of high school (that was a culture shock, which he describes.)  He went on to Florida A&M and then Temple University.

The parents were also activists, with their Christian philosophical roots (and thus his) in the liberation theology of James Cone, who taught at Union Theological Seminary in New York. Cone once told Kendi’s father, the book reports, “a Christian is one who is striving for liberation.”

Like many who later end up with stellar academic credentials, young Kendi first struggled in school, “perhaps even caused by the additional struggles that racism added to my school life, from a history of disinterested, racist teachers, to overcrowded schools, to the daily racist attacks that fell on Black boys and girls.” (p.93)

The use of standardized tests to measure aptitude and intelligence is one of the most effective racist policies every devised to degrade Black minds and legally exclude Black bodies…The acceptance of an academic-achievement gap is just the latest method of reinforcing the oldest racist idea: Black intellectual inferiority.  (p. 101)

He is correct with his criticism of historical school funding disparities, which still demand attention. Kendi’s condemnation of racism as practiced in America, from its founding to the present day, is pointed.

What is debatable is his central premise (shared with the New York Times’ 1619 Project) that racism-based exploitation was the central driving impetus of Western Civilization for half a millennium, and of the United States in particular. A key foundation of his argument is claiming racism really only began in earnest when Africans became the slaves of Europeans. I think that is the other book, “Stamped From the Beginning.”

Earlier in life he was convinced white Americans were not just evil, but were from another planet, telling a college friend):

The notion apparently didn’t last long after his friend talked him down, but the distrust that outburst displayed seems to remain in full force. He even distrusted the motives of the many white allies pushing the civil right legislation in the 1960s, dismissing it as a public relations effort to stem international embarrassment. 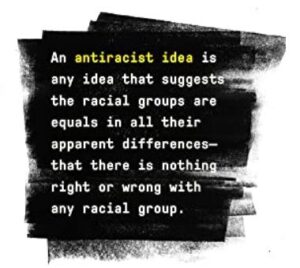 Former President Donald Trump’s complaints about a stolen election, even Hilary Clinton’s about 2016, are no more forceful or evidence-challenged than Kendi’s accusations about 2000 and 2004. “As Bush’s team transitioned that winter, I transitioned into hating White people.” (p. 125)   He later disavows that, too, and the best aspects of his book involve a general understanding that viewing and judging anybody based on race is wrong.

Finally he settles on the economic explanation for slavery, and for the racist arguments made to justify its continuing in the Age of Enlightenment and political reform. The motivations have always been economic gain. “The source of racist ideas was not ignorance and hate, but self-interest.” (p. 230)

As previously explained (and the liberation theology upbringing was a hint), his analysis becomes Marxist and his solutions anti-capitalist. This really doesn’t emerge until about page 150. By page 159, racism and capitalism are “conjoined twins.”

What capitalism introduced into the mix was global theft, racially uneven playing fields, unidirectional wealth that rushes upward in unprecedented amounts. Since the dawn of racial capitalism, when were markets level playing fields? When could working people compete equally with capitalists? (p. 162)

The quotations above were recorded by hand, and if there are transcription errors, they were unintentional. No meaning would change if you read them in context. The book is back with the library. I have not chosen to buy one. No one should be buying what he’s selling without reading him in full.