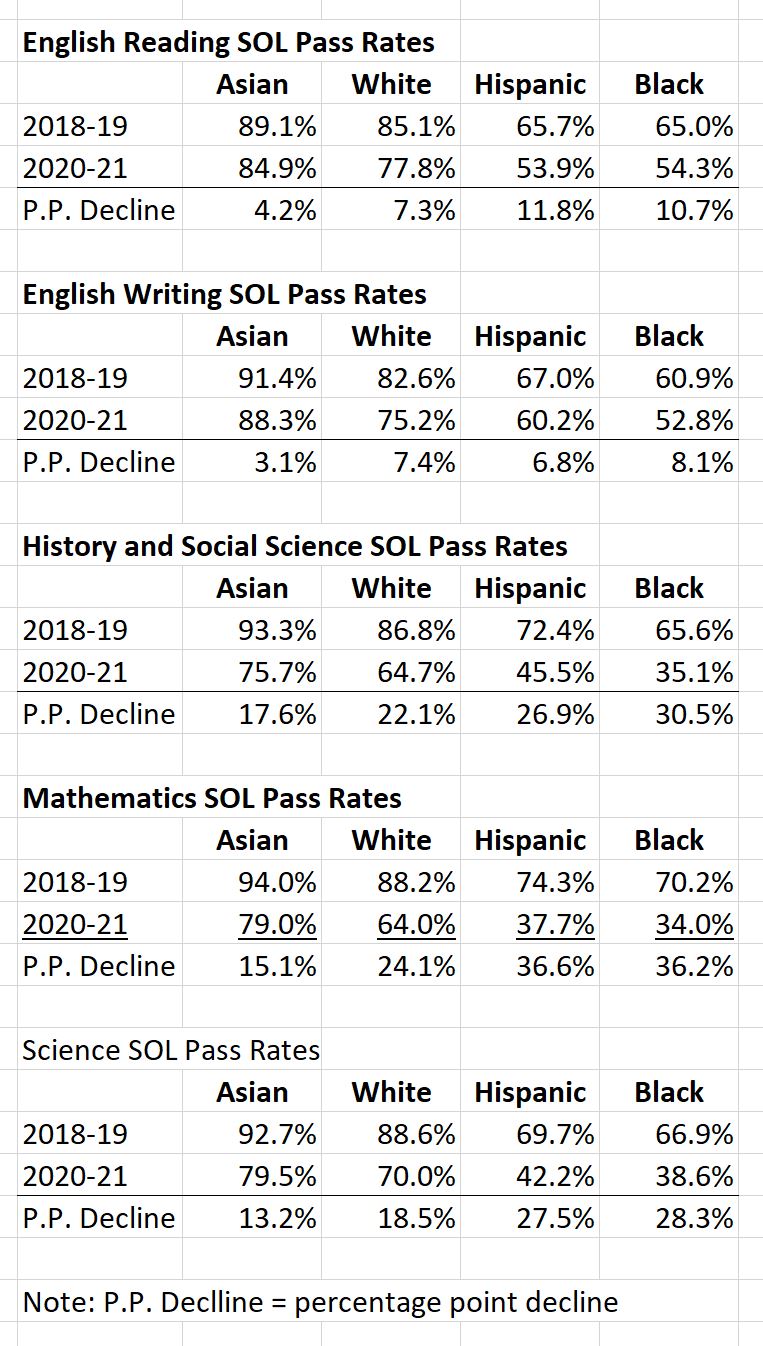 Here is a pro forma breakdown of Standards of Learning pass rates by race and subject. I say “pro forma” because these numbers do not reflect the fact that one-fifth to one-quarter of public school students failed to take the test in the 2020-21 school year. Adjusted numbers might prove to be even more dismal, although I am too early in my analysis to suggest that is, in fact, the case.

Two things are abundantly clear. First, test scores fell across the board — all races and all subjects. Second, the racial gap widened. As anyone could have predicted, test scores among Asians fell the least of any racial/ethnic group — although the decline was big enough to be profoundly discouraging. Pass rates for whites fell significantly more, while pass rates for Blacks and Hispanics went into free-fall.

A 34% pass rate in math SOLs for Blacks is nothing less than catastrophic. It is difficult to imagine how thousands of Black students can ever recover from this setback.

The great irony here is that 2020-21 was also the school year that the Virginia Department of Education and many politically progressive school districts began applying the precepts derived from Critical Race Theory to the training of teachers and administrators, and in some instances to teaching in the classrooms. While blaming “systemic racism” and “white supremacy” for the racial gap in test scores, the Northam administration presided over a response to the COVID epidemic that was widely predicted to impact Blacks and Hispanics the most negatively — and, in fact, did.

It turns out that the “systemic racism” in Virginia schools arose from politically progressive parents and big-city teachers’ unions who magnified the risk of COVID exposure and pressured school closures. While most private schools and many non-metro public schools figured out how to maintain in-person learning during the pandemic, school districts with large percentages of Blacks and Hispanics relied disproportionately upon distance learning or hybrid distance/in-person learning.

This entry was posted in Culture wars, Education (K-12) and tagged COVID-19. Bookmark the permalink.