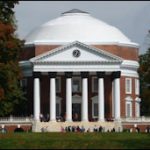 What would Mr. Jefferson say?

A study of five Virginia public universities shows that admission policies at all five institutions discriminate against Asian applicants after accounting for standardized test scores and high-school grade point averages. The University of Virginia and the College of William & Mary, the two most selective institutions, also discriminate against whites in favor of blacks and Hispanics.

Based on data obtained through the Freedom of Information Act, Althea Nagai, a research fellow at the Center for Equal Opportunity, a right-of-center think tank, reached the following conclusions:

White applicants (along with blacks and Hispanics) were favored over Asian Americans at all five institutions. The other universities included in the study were Virginia Tech, James Madison University, and George Mason University.

Admissions policies at Virginia’s public colleges and universities have long been a black box. Institutions juggle a wide range of factors, including in-state and out-of-state status, male-to-female ratios, legacies, and racial/ethnic diversity. This study, “Preferences in Virginia Higher Education,” is the first to systematically measure these variables.

The study was mainly interested in the role of race. In 2003 the U.S. Supreme ruled that race may be used as “a factor” in university admissions as long as it is narrowly tailored to achieve a compelling government interest such as achieving a racially diverse student body. However, explicit racial quotes remained unconstitutional, as did the use of race to make up for the injustice of slavery and discrimination against blacks.

“Despite claiming to be devoted to the growth and dissemination of knowledge,” writes Nagai, “many of America’s institutions of higher education have resisted scrutiny of admissions data that would lead to increased public knowledge of whether or how racial and ethnic preferences operate.” However, all five Virginia schools were “forthcoming and cooperative” in providing the admissions data, she wrote.

There are several ways to look at the data. One is the “admissions rate” — the percentage of applicants by race who were accepted to an institution. The differences in admission rates can be seen here:

The range of admission rates is relatively narrow, and shows no clear pattern. Indeed, at Tech, JMU and GMU, a higher percentage of white and Asian applicants are accepted than black and Hispanic applicants. However, this data does not account for the applicants’ academic credentials — SAT scores, ACT scores, grade point averages. Complicating the analysis is accounting for the generally superior qualifications of out-of-state applicants, which for political reasons, UVa and W&M are under heavy pressure to limit. Likewise, UVa and W&M are under the gun to achieve a measure of geographical diversity from around the state.

To simplify the analysis, Nagai excluded racial classifications with relatively small numbers, including American Indian, Native Alaskan Native Hawaiian, Other Polynesian Islander, bi-racial, unknown, and other. Then she compared SAT scores, ACT scores, and GPAs for the four main racial/ethnic groups based on 25th, 50th, and 75th percentiles. A 75th percentile means that 75% of that group were admitted with lower scores, 25% with higher scores. 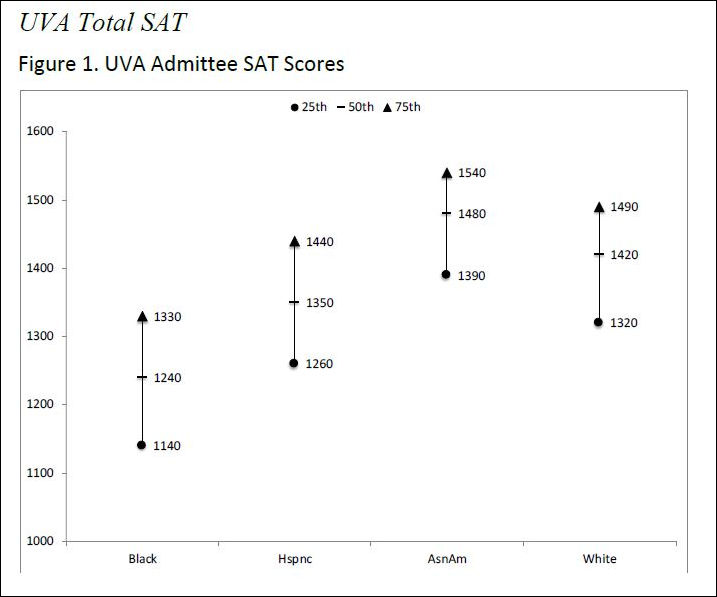 In this chart, it can be seen that Asians admitted to UVa had the highest SAT scores, followed in order by whites, Hispanics and blacks. As Nagai concludes, “Given these test scores, UVA appears to have granted preferences to blacks and Hispanics over whites and Asian Americans. The black admittee median test score (1240) was … 240 points lower than the Asian American median (1480) and 200 points lower than the white median (1420).”

The data also suggest that UVa admitted whites over Asians, although the differential was smaller. 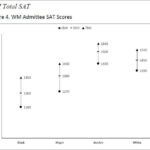 As an elite institution with leeway to be more selective with admissions, W&M followed the same pattern as UVa, giving the greatest preferential treatment to blacks, but also favoring Hispanics and whites over Asians. 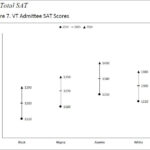 Virginia Tech, also considered a “national” university, followed the same pattern, although the gaps in SAT scores were smaller. 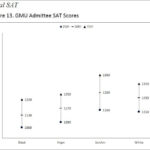 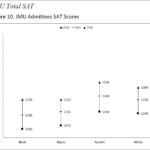 James Madison, classified as a “regional” institution, showed the smallest difference in SAT test scores between racial/ethnic groups. Indeed, the difference between blacks and Hispanics was virtually nil.

Using the statistical technique of logistic regression, Nagai calculated the the odds of admission for blacks, whites, Asians and Hispanics while holding their qualifications constant. 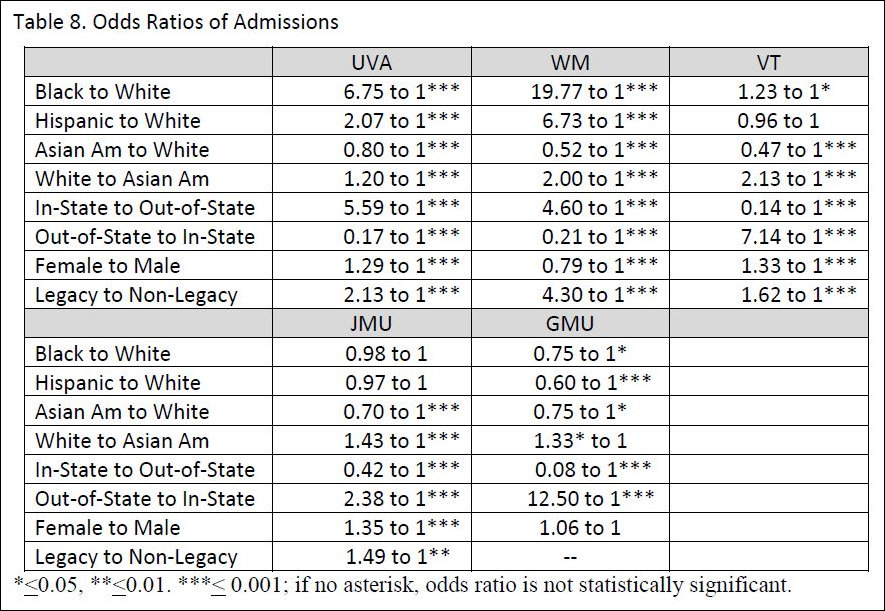 By this reckoning, UVa and W&M show a huge preference for blacks, a modest preference for Hispanics, and a preference of all other groups over Asians. The odds of Asians getting into W&M are particularly low.

JMU admissions appeared to be virtually color blind regarding blacks, whites and Hispanics, but Asians faced considerably longer odds of getting in. At GMU whites had better odds of being admitted than blacks and Hispanics — a curiosity that warrants closer examination because GMU, if I recall correctly, is the most ethnically diverse of all five institutions.

Bacon’s bottom line: The Center for Opportunity study draws no conclusions as to whether the admissions policies at the five institutions are justified or unjustified. But a pattern of discrimination in favor of blacks and Hispanics and against Asians seems pretty clear. If we adopt the logic of the social justice movement, it is hard to avoid the conclusion that Asians are being discriminated against in public university admission policies.

Here in Virginia, one can make the case that, given the history of slavery and segregation in the state, special consideration should be given to African-American descendants of slaves. It’s less clear that special consideration should be given to blacks of African or Caribbean origin or to Hispanics. It is difficult to think of any justification for discriminating against Asians, especially if they are in-state American citizens. (Chinese citizens, I’m less concerned about.)

Discrimination against Asian citizens by tax-supported public universities — especially the flagship institutions — is disgraceful and unforgivable. If Governor Ralph Northam is serious about fighting for “racial equity,” as he claims to be, perhaps he should get his new director of diversity, equity and inclusion to dig into anti-Asian discrimination at Virginia universities.

This entry was posted in Education (higher ed), Race and race relations. Bookmark the permalink.