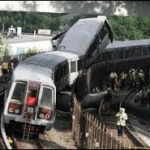 Season greetings to Bacon’s Rebellion readers, and the Happiest of Holidays to the D.C. Metro system.

In a major coup for Virginia and its Metro partners, Senator Mark Warner and friends have secured $830 million for Metro in the to-be-approved-someday COVID stimulus package, thus avoiding the Doomsday scenario of severe schedule cutbacks, reports WJLA.

Was the Doomsday scenario announced as a scare tactic to get the funding package? Food for thought.

Whatever the case, Warner told ABC7 Tuesday afternoon that approximately $830 million in the COVID bill will go to help Washington-area transit systems, adding that not all but the vast majority of that will go to Metro. “I think it’s an early Christmas present for Metro and its riders,” said Metro Board of Directors member Matt Letourneau of Loudoun County.

Meanwhile, the long-term implication is that the federal government could be the new long-term funding partner for Metro, which makes some sense given the the federal jobs it supports. What about the nation’s other struggling mass transit systems? What about our formerly beautiful and growing car pool HOV3 “slugging” system in NoVA?

Only time will tell.