The University of Virginia had its “F*ck UVa” sign controversy. Brace yourself for Washington & Lee University’s “F*ck quilt” brouhaha.

About ten days ago, W&L announced a new dean of the college, Chawne Kimber, head of the math department and co-director of the STEM education at Lafayette College in Pennsylvania. She will oversee 21 departments and 13 interdisciplinary programs.

“We are fortunate that Chawne will be joining the W&L community to lead the College,” said Lena Hill, the current dean and soon-to-be provost, in a press release. In addition to her academic accomplishments in mathematics, STEM pedagogy, and promoting diversity, Kimber is an “accomplished visual artist.” Her work, presented in galleries and museums across the country and lauded in publications ranging from The Washington Post to Quilting Arts Magazine, uses quilting to explore social justice themes. 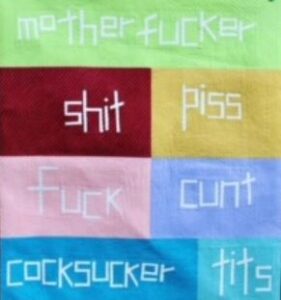 Yes, some people call this art.

One of Kimber’s artistic tropes is to “challenge boundaries” by quilting variations on the word f*ck and other profanities. As she says on her quilting blog, “completely cauchy,” “We express our potty-mouths in patchwork using the ultimate in four-letter words.”

It’s not entirely clear from the completely cauchy blog what the philosophical impetus is behind the ornamentation of profanity.

Kimber’s Wikipedia profile says that the Give a F*ck series was inspired by George Carlin’s seven dirty words and by racist and sexist graffiti on her college campus. By way of explanation, Kimber’s blog links to a guest post on “WhipUp,” a craft website, but clicking through triggers alarms for viruses and malware.

“I have big balls. I’m really going to need this this week.”

The General’s Redoubt, an organization of dissident W&L alumni, attributes the following quote to “the blog of the new Dean.” I have not been able to source the quote, perhaps because parts of completely cauchy are restricted. Or perhaps because the quote comes from the WhipUp post I couldn’t access. Whatever the case, here it is.

Every time I sit down to write about this quilt, I am paralyzed with fear, slowed down by obstacles, and overflowing with rage borne from inhabiting this society as a person who is not a white man. The outline turns into a textbook about US history and persistent willful inequities, which is wearying and demoralizing.

It will be tone-policed. It will bring more invalidation. And I will die from containing the rage.

To get more folks to take a moment and exercise their potty-mouths in textiles, I started a communal quilt project that is tentatively entitled The Give a F*ck Quilt. Textile artists around the world have volunteered to design blocks for the quilt and a couple of them have already arrived early. I thought that I’d show them to you to give a sense of the diversity of interpretations of the request.

Where I grew up, it’d be considered truly impolite to talk f*ck on a Sunday. Mind you, it’d probably be “okay” to engage in the act of f*cking, but talking about it would be a problem.

Do not ask me for resources. Don’t be that person. Use your noggin and your fingers to search on google about: lynching, white supremacy, racism, white fragility, intersectionality, capitalism, slavery, poverty, the 13th amendment, prisons, discrimination in education, income inequality,…you know, life.

At RealJob in a meeting of a group purportedly devoted to promoting equity and inclusion I was sternly reminded that ALL LIVES MATTER in an effort to ensure the exclusion of folks of color from all future discussions. Yes, indeed. And no one spoke up to contradict this proclamation. Silence is incredibly loud. That I’ve remained quiet about this despite knowing that it is the clearest cue to extricate myself from this group has been a big mistake on my part. At the same time, it has been a severe injustice on the part of my colleagues who imagine themselves to be allies and take victory laps each time they find themselves to be woke. [Why am I still here? This question paralyzes me every time a student asks.]

Kimber’s #cauchycomplete Twitter account indicates that she joined in January 2011 and has 820 followers. As unlikely as it seems, quilting, needlepoint and other crafts have become as politicized as the rest of society. No corner remains untouched by the Culture Wars.

I find it interesting that the Twitter account lists only 16 tweets going back to February. The announcement of Lena Hill’s promotion from W&L’s dean to provost occurred Nov. 24, 2020. Presumably, a search committee began looking for a new dean shortly thereafter. This is conjecture, but the timing suggests that Kimber engaged in some cleansing of her Twitter account around the time W&L’s recruiters came sniffing around.

In the W&L announcement of her selection as dean, Kimber only hinted at what her priorities will be. “It will be an honor to collaborate with the impressive faculty and staff at Washington and Lee University on recruitment and retention of faculty and students from diverse backgrounds, inclusive practices for teaching and learning, and shaping the liberal arts curriculum for the future.”

For those who have not learned to read the language, Kimber will be implementing a “diversity, equity & inclusion” agenda that encompasses the recruitment and retention of minority faculty, introduction of “culturally relevant” pedagogy, and the design of new courses inspired by Critical Race Theory. I expect that W&L students will be learning a lot more about “lynching, white supremacy, racism, white fragility, intersectionality, capitalism, slavery, poverty, the 13th amendment, prisons, discrimination in education, income inequality” in the years ahead.