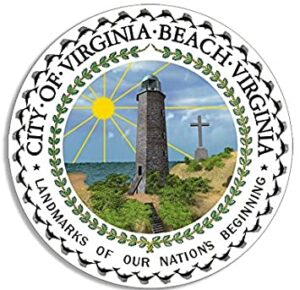 Some background is needed first. Virginia Beach has an unusual method of electing its council. All 11 members of the council are elected by all the voters in the city. However, seven of the council members must live in the district they represent, while three members and the mayor are truly at-large, meaning they can live anywhere in the city. For example, Mary Doe may run for council as the member from District 7, which includes Sandbridge where she lives, but she must get a majority of the citywide votes for the seat.

The electoral arrangement has been in place since 1966  It has its origins in the conditions established for the consolidation of the small city of Virginia Beach and the large county of Princess Anne in 1963.

The ramifications of the system are evident. The chances of a sizable minority population in the city obtaining representation on the council, even if they constitute a majority in one or two districts, are diminished.  In 2017, some residents of Virginia Beach filed suit in federal court, claiming that the Virginia Beach electoral system violated the Voting Rights Act.

The 2021 General Assembly enacted legislation that would end the policy of members representing a district being elected at-large. The fact that the legislature passed this legislation is interesting in and of itself. There is a general policy that the legislature will not consider bills regarding matters that are the subject of litigation. However, this is one of those “elastic” policies that parties have abused over many years. It has been used to avoid potentially politically unpopular votes on legislation. But, when the policy proves inconvenient to a party desiring a particular bill, it is ignored. Such was the case with this legislation. The Democrats wanted it and it passed on a straight party-line vote in both houses.

Although clearly aimed at Virginia Beach, the legislation was framed as general law, prohibiting any locality, in which there were district or ward residency requirements for members of the governing body, from providing for election of those members at-large. Even with this change, there were some advocates who worried that the city would later ask the General Assembly for a change to its charter to convert all council seats to an at-large basis.

That latter fear was eliminated with the decision of the federal court at the end of March on the suit that had been filed. Acknowledging that the Supreme Court had ruled that at-large districts are not illegal per se, the district court set out the Supreme Court’s three-pronged test for determining whether an at-large system violates the Voting Rights Act:

If those preconditions are met, the court must then determine under the “totality of the circumstances” whether there has been a violation of the Voting Rights Act.

In a lengthy (135 pages) opinion considering the evidence in light of these tests, the district court concluded that “by a preponderance of the evidence, the plaintiffs have demonstrated that the at-large system of elections for the Virginia Beach City Council denies Hispanics, African Americans, and Asians equal access to the electoral and political process, in contravention of Section 2 of the Voting Rights Act.”  ccordingly, the court declared the at-large method of election “illegal” and not to be enforced in future elections.

At a later date, the court will issue an order, after hearing arguments from each side, setting forth remedies.

Critics have long accused the Virginia Beach city council of cronyism. (See this post of Kerry Dougherty.) This decision should come as good news to them because it could bring different perspectives to the council. Of course, the development interests could coopt council members from minority districts, as well. It will be interesting to see if this decision makes a substantial difference in Virginia Beach politics.

This entry was posted in Courts and law, Elections, Money in politics and tagged Dick Hall-Sizemore. Bookmark the permalink.