Williamsburg the Locality Most Vulnerable to COVID-19 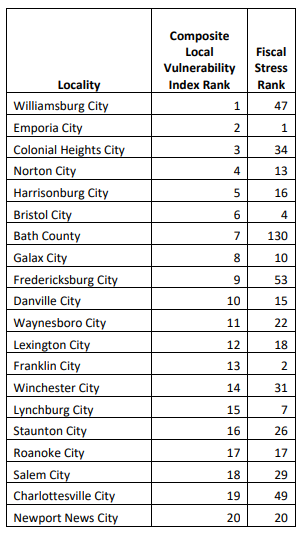 The City of Williamsburg is the Virginia locality most vulnerable to the stresses imposed by the COVID-19 epidemic on local governments, according to a report recently issued by Virginia’s Commission on Local Government. Other small cities — Emporia, Colonial Heights, and Norton — follow close behind on the list.

The Commission based its assessment on three sets of data. The first is the Fiscal Stress Index, which the state already maintains to measure the taxing capacity of local governments and the “effort” they expend in terms of taxes levied. Commission analysts also considered each locality’s dependence upon revenue sources most immediately impacted by the virus: local sales taxes, transient occupancy taxes on hotels, and meals taxes. Thirdly, they used an analysis of job loss vulnerability produced by Chmura Economics & Analytics based on a region’s mix of industries.

Some localities relatively low on the Fiscal Stress Index — Bath County (130th), Fredericksburg (53rd) and Charlottesville (49th) — appeared in the Top 20 list of most vulnerable localities.

It is also noteworthy that every jurisdiction in the Top 2 list of most vulnerable localities was a small or midsized city. As seen in the map below, cities are far more likely than counties to rely upon taxes on hotels and restaurants.

For the most part, localities rated as having “low” vulnerability to disruption by the COVID-19 virus are rural or exurban counties, the main exception being Fairfax County, thanks to its low Fiscal Stress ranking, below average dependence on COVID-impacted taxes, and an occupational mix less vulnerable to layoffs. The other low-vulnerability localities include the counties of Charles City, Bland, Buckingham, Northumberland, Clarke, King George, Goochland, Highland, and most insulated of all from COVID-19 risk…. Surry County.

As an aside, the Commission also examined the unrestricted fund balances of each locality. Based on FY 2018 data, eight localities were identified as being able to to sustain two or fewer months of general fund expenditures through their unrestricted fund balances. These include the cities of Petersburg, Staunton, Radford, Norfolk, Roanoke, Newport News, Martinsville, Bristol, Hopewell, Lynchburg and Colonial Heights. Petersburg, which has only recently recovered from a calamitous fiscal meltdown a few years ago, had the smallest reserves.

This entry was posted in Finance (government) and tagged COVID-19, James A. Bacon. Bookmark the permalink.