What Is Cuccinelli’s Role in Defining Extremism? 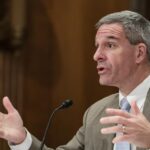 Allegations that the Wolverine Watchmen, a far right extremist group based in Michigan, discussed kidnapping Gov. Ralph Northam draw questions about the role another Virginia politician has played in defining extremist threats.

Kenneth Cuccinelli a former Republican attorney general and failed gubernatorial candidate, has been accused of helping delay a report by the U.S. Department of Homeland Security that designated white supremacist groups as the biggest domestic threat the country faces.

That apparently is at odds with President Donald Trump’s view that threats by the so-called “Antifa” leftist groups are the main worry.

Cuccinelli is currently acting deputy to Homeland Security chief Chad Wolf. Both The Washington Post and The New York Times have reported that Cuccinelli helped block an assessment by former Homeland Security intelligence chief Brian Murphy that white supremacists are the larger threat.

According to a recent Times report: “Brian Murphy, who was demoted from his post as the Homeland Security Department’s intelligence chief in August, said last month in a whistle-blower complaint that Mr. Wolf and his deputy, Kenneth T. Cuccinelli, blocked the release of the assessment because of how it would “reflect upon President Trump.””

Cuccinelli has been accused of trying to block or dilute any threat assessments that run contrary to Trump’s public (or Tweeted) statements. After a whistle blower probe, the final Homeland Security was released in early October stating that violent white supremacy groups were “the most persistent and lethal threat in the homeland.”

Just this week, evidence of such a threat came out at a hearing in Michigan related to the charges against 13 men for plotting to kidnap and perhaps kill Michigan Gov. Gretchen E. Whitmer or perhaps provoke violence designed to instigate a civil war. During the hearing an FBI agent testified that his agency also learned that the group discussed kidnapping Northam because of his policies in containing the coronavirus pandemic. Both Whitmer and Northam are Democrats.

There have been widespread fears that white supremacy groups or unltranationalists will show up at polls Nov. 3 wearing tactical combat vests and carrying high-powered rifles.

Some members of the “Wolverines” are said to have shown up carrying weapons in Michigan’s State Capitol. They apparently did so legally because the state has an open carry law.

So does Virginia where similar armed groups have appeared at gun rights rallies and a protest of Northam’s anti-virus policies.

According to The Washington Post, Democrats have reacted to news of the plot against Northam with concern about armed right-wing groups, while Republicans have dismissed that fear, saying that the “Antifa,” a loose coalition of left-leaning protestors, has been responsible for widespread violence at Black Lives Matter demonstrations across the country.

Cuccinelli’s role is curious because he had a reputation for right-wing activity as attorney general. For instance, he led a months’ long legal fight against Michael Mann, a former University of Virginia professor, for his views that climate change is caused by human activity, something Cuccinelli doesn’t agree with. He also was noted for his anti-gay views and opposition to legal abortion.

Cuccinelli’s association with the Trump administration has also been controversial. According to Wikiepedia: “His appointment as Acting (U.S. Citizenship Customs Immigration Services) Director was ruled unlawful by U.S. District Judge Randolph Moss on March 1, 2020, who found it to be in violation of the Federal Vacancies Reform Act of 1998. On August 14, 2020, the Government Accountability Office ruled his appointment as the Senior Official Performing the Duties of the Deputy Secretary illegal as well.

There are also questions about his role at Homeland Security. Cuccinelli was defeated for governor by Terry McAuliffe in 2013.