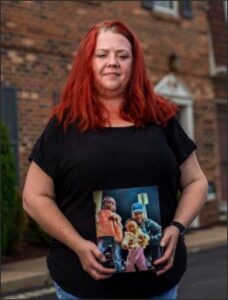 I’m guessing that we’re supposed to feel sorry for Shelley Tibbs, whose sorrowful tale is told in a Fredericksburg Free Lance-Star article about “prison profiteering.”

Ms. Tibbs’s son was booked into Rappahannock Regional Jail one recent Friday — on what charges, we are not told. All we know is that he had served a previous sentence for seven months and has suffered from substance-abuse issues. Whatever the particulars, the Free Lance-Star informs us that within days of her son’s incarceration Ms. Tibbs had deposited almost $100 into his JailATM account so he could order from the canteen, listen to music, stream movies, write emails, and call her. In his previous incarceration, she had spent more than $400 monthly on his extras, going into debt to do so.

It seems that jails across the country charge for extras that make life in jail and prison more pleasant. According to the FLS, the Rappahannock facility generated almost $2.8 million from commissions, more than any other jail in the state. And the ACLU, which has largely abandoned protecting the individual liberties of Americans in favor of championing “social justice” causes, finds “prison profiteering” to be reprehensible. Not just reprehensible but racist.

The militants combating prison profiteering deem it an injustice that, nationally, families spend roughly $3 billion a year to support their “loved ones” in jail on top of the almost $81 billion that taxpayers already pay to support prisons, jails, parole and probation. Black, Hispanic and indigenous people disproportionately bear the cost of the extras. Oh, and women, too, because it appears that fathers typically aren’t in the picture — or, if they are, they don’t share the mothers’ desire to spare their sons the discomposure of life in jail.

Of course, every issue these days has been re-cast in light of racism, sexism, and homophobia.

Here’s what you won’t see in the FLS article: any discussion of why inmates are allowed to pay for meals, snacks, music, and movies in the first place. Since when did that become a thing? Since when are inmates provided what the FLS refers to as “jail-issued tablets”? Naively, I thought one purpose of incarcerating people was to deny them the pleasures of everyday life — to make life undesirable enough to induce them to try harder not to return.

I will concede that some of the Rappahannock jail charges struck me as excessive. According to the FLS, writing emails costs 25 cents per word. Calling home from the tablet cost Tibbs $6 for 15 minutes. But the story contains no explanation from jail officials of the basis for the charges. Nor, despite accusations of prison “profiteering,” does the story tell us how much profit the Rappahannock jail made on the $2.8 million in revenue. State policy dictates that any profits, such as they are, must be set aside to benefit the inmates.

What is the implication here? That taxpayers should pick up the tab for providing inmates with tablets, music, streaming video, and candy bars from the canteen?

It may be worthwhile drawing a distinction between expenditures for personal consumption and expenditures for purposes that would improve an inmate’s odds of rehabilitation. Education and reading should be encouraged. Fitness, health and hygiene should be encouraged. Maintaining connections with family members should be encouraged. My initial reaction was that it sounded terrible to charge Tibbs $6 for a 15-minute conversation with his mother. But, upon reflection, I realized that was likely a Facetime chat. Is anyone being unjustly deprived if they are charged for such a nicety, which presumably costs the jail to provide, especially when inmates have access to prison phones?

The FLS article goes on to describe the plight of other women who support their sons in jail. Dawn Clark of Stafford estimates she has spent about $600 monthly over the year her son has been in the jail so he can use the tablet, order from the commissary, receive a subscription to the daily newspaper, and call her twice a day. “I go without stuff for him,” she said. “I can think of a lot of stuff I could do with $600.”

Michelle Gray of Spotsylvania is supporting her son to the tune of $200 monthly from her fixed income of disability and Social Security payments. “I try to do what I can to make it as easy as it can be in there,” she said.

Not to sound cruel, but perhaps these mothers are part of the problem. Their sons committed crimes. The public purpose is not being served by making it “as easy as it can be” in jail. Inmates should pay a price in having their liberties curtailed. What son wants to talk to his mother two times a day? This isn’t about the sons, it’s about mothers who can’t disconnect from their sons. As described by the FLS, these mothers sound like they’re enabling their sons’ behavior.

The coddling of criminals has reached new pinnacles of absurdity. Do the ACLU and Free Lance-Star have no causes more worthy of their attention?