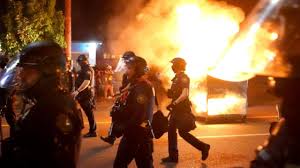 Chaos. Violent riots have become a nightly occurrence across America. Portland is now over 100 nights of protests and riots. Meanwhile, Portland’s mayor expresses his solidarity with the protesters while moving from his residence because of the number of violent protests conducted on his doorstep. You can’t make this up. People are dying in big cities and small. Kenosha has been a war zone recently and another inexplicable police shooting in Los Angeles has that city on edge. In Chicago Mayor Lori Lightfoot recently had an epiphany … the riots and looting were not protests. Rather they were “planned attacks.”  Sharp thinkin’ from the Land of Lincoln. Sadly, the Labor Day weekend saw 51 shooting and 10 killings in Chicago. Closer to home D.C. Mayor Muriel Bowser is talking about a possible “race war” stirred up by “outside agitators.” Charles Manson is getting his “Helter Skelter” 50 years late. Virginia has been no stranger to street violence as looting and vandalism have come to Richmond and Hampton Roads.

A ticking time bomb. November’s Federal elections are set to provide some real fireworks. First, there is the ongoing violence mentioned above along with a high rate of unemployment and economic despair. Fresh unemployment data indicates that the current recession will likely remain serious through election day and beyond. Second, there is a level of political rancor that is rivaling, if not exceeding, the days of Nixon and the Vietnamese War. Stunningly, a recent poll in six swing states found that a majority of respondents found both Biden and Trump to be mentally unfit for the office of President. Finally, there will be a massive number of votes cast by mail. While I see nothing inherently wrong with voting by mail, the process is far less monitored than in-person voting. At the same time, it may take quite a long time for the mail-in votes to be counted.

Who won? There is a considerable possibility that the results of the 2020 election will not be known on election night or possibly much longer. Republican voters are more likely to vote in person while Democrats seem to favor mail-in ballots. Early results could show Trump winning in states on election night that he will eventually lose. Videos of some miscreant dumping mail in general or mailed-in ballots in particular are bound to emerge. Cries of fraud can be confidently predicted. Neither side may be willing to concede for quite some time, leaving a volatile America on edge and ripe for violence. We may all be wishing for the simpler days of hanging chads.

Remember Charlottesville. On August 11-12, 2017 in Charlottesville, Va., the Unite the Right rally became a riot. Blame for causing the riot has been correctly affixed to white supremacists. Blame for failing to contain the riot has been correctly affixed to Virginia’s government. Authorities were warned about the possibility of trouble in advance of the riots in Charlottesville. As Politico stated, “The assessment raises questions about whether Charlottesville city and Virginia state authorities dropped the ball before, and during, a public event that was widely expected to draw huge crowds of armed, emotional and antagonistic participants from around the country.” An independent retrospective report provided a scathing review documenting the incompetence of local and state officials in containing the mayhem.

The gathering storm. Virginia, along with the rest of the nation, faces a gathering storm. Ongoing civil strife, deep political divisions, economic despair and a hyper-emotional election that may not be decided for weeks after the voting ends adds up to the equivalent of a fuse on keg of dynamite. However, Virginia, unlike most of the nation, has a proven record of incompetence in managing riots. Do our state and local political leaders have a plan for addressing what could be widespread rioting in the wake of November’s election? Have we learned the lessons of Charlottesville? Let’s first hope that the possible election-related rioting never happens. Barring that, let’s hope that Ralph Northam is considerably more prepared than his predecessor, Terry McAuliffe.