Looking for a Do-Over – Secretary Qarni, the Fairfax County School Board and the Left’s War on Asian Americans 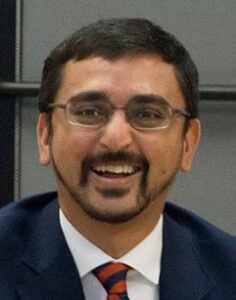 Virginia Education Secretary Qarni – Why is this man smiling?

“We must change now,” the president said. “I know it’s going to take time, but I know we can do it. And I firmly believe the nation is ready to change. But government has to change as well.”

From the Associated Press:

The orders “disavow discrimination against the Asian American and Pacific Islander community over the coronavirus pandemic.”

“The memorandum highlighting xenophobia against Asian Americans is in large part a reaction” to Donald Trump.

“Large part” indeed. Effectively the AP is saying “nothing else to see here.”

But the AP’s D.C.-based reporters need look no farther than Richmond and Fairfax County to find direct assaults on Asians — by Democrats.

Secretary Qarni, call your office. Something important has come up about all that federal money in Virginia’s school system.

On September 21, I published an essay here that addressed the issue of Anti-Asian racism. From that piece:

The Problem is the Asians –  Sec. Qarni

(Virginia Secretary of Education Atif) Qarni has made quite a splash in demanding Virginia’s Governor’s Schools, including the Thomas Jefferson High School for Science and Technology (“TJ”), the nation’s top rated high school, with an acceptance rate of 15%, drop admissions testing and make TJ student demographics match the overall demographics of Fairfax County Schools.

In an interview, Qarni unintentionally mimicked Richard Nixon’s Watergate tapes when he leaned into the mike and said:

“Let me be clear: We are not considering a racial quota system. That is unconstitutional.”

He just wants the results he demands. He wants to eliminate achievement tests and replace them with aptitude testing. “Aptitude tests are not being utilized … and they haven’t developed good aptitude testing.” That would be a good reason not to use them. The other would be the ferocious response of the left to the old aptitude tests in the controversy over the book “The Bell Curve” That book was published when Qarni was 16.

The problem, as Mr. Qarni defines it, is Asians.

“Because at TJ, the population is 70% Asian. At Maggie Walker, it’s only 25% Asian, but it’s growing (cue ominous background music)…”

His expressed desire to dramatically reduce Asian presence in Governor’s schools and AP classes brought a furious response from their parents and conservative pundits. It ignited a huge controversy and a nasty reaction by the Secretary.

I have no idea why he still has his job.

The Fairfax County School Board

For the Fairfax County School Board (FCSB), awash in federal impact funds, perhaps an emergency meeting is in order.

The members may wish to consider a brilliant piece by former Wall Street Journal reporter Asra Q. Nomani on October 31: The War on Asians, the Death of Meritocracy, and Assault on STEM. They should read particularly closely her section on the “National War on Asians”.

Excerpts from her essay:

This past weekend, about 100 families, students, alumni and community members Thomas Jefferson High School for School and Technology stood on the grassy lawn in front of the school and held a symbolic memorial service for the nation’s No. 1 high school. …

They (and I, as a TJ parent) were also grieving something else: a war on Asian Americans by educrats and activists pushing the controversial ideology of critical race theory that is sowing racial discord and division in K-12 school districts around the country. Today, parents and community members launched a Change.org petition to have Fairfax County Superintendent Scott Brabrand and TJ Principal Ann Bonitatibus lose their jobs, following months of behind-the-scenes activities by the two officials supporting the anti-Asian attack on the school’s students and families. Yesterday evening, the Chinese American Parents Association of Fairfax County sent a three-page letter to the Fairfax County Board of Education, opposing the lack of “respect” that Asian Americans have been facing in the debate over TJ admissions.

Ideologues in the dangerous philosophy of critical race theory had just scored a major victory in their war on Asian-Americans. Like bigots and racists in the 20th century targeted Jewish students who secured admission to America’s Ivy League schools, activists are putting a hit on Asian-Americans who defy their thesis that “systemic racism” and “white supremacy” so oppress minorities that they cannot advance.

The rhetoric nationwide mirrors the language in Fairfax County, Va., where a small but vocal group of radical TJ alumni activists, espousing ideas of “social justice” and “anti-racism,” have been working with the Fairfax County Superintendent Brabrand, the 12 Democratic members of the local school board, the Virginia Education Secretary Atif Qarni, state Democratic politicians like Sen. Scott Surovell and TJ Principal Bonitatibus in an organized campaign to not only undermine the school’s selective admissions process but also the very idea of STEM at the school.

The test was gone. The lynchpin of evaluating STEM merit was gone. Instead of asking why school officials had consistently failed to educate Black and Hispanic students so they had high aptitude in math and science, the school board, superintendent and school principal had demonized not just the test but the Asian American students who do well on it.

Then this from a reader quoting Vern Williams, a black man with 40 years experience teaching in Fairfax County:

“Many have asked for my take on the proposed changes to the Thomas Jefferson High School admissions process. Once one goes down the road of politically protecting groups based on race or ethnicity it leads to very strange and contradictory circumstances. The nation’s number one high school somehow needs to be fixed because current politically protected minorities are not adequately represented in the student body. Ironically the wrong (politically unprotected) minorities claim over 70% of the seats at TJ. Over the last few weeks they have been demonized by the superintendent, the Thomas Jefferson Principal, and the majority of members on the Fairfax County School Board.

As for the new federal policy vs. Qarni and the FCSB, what goes around comes around. Perhaps they had their fingers crossed when they said all of those things.

Does that still work?

Just in case they missed this column, I filed a formal complaint this morning with the federal Department of Education Office of Civil Rights.

I wonder what Attorney General Herring’s new Office of Civil Rights is doing this morning?   Does he have to defend Qarni if the feds come after him?