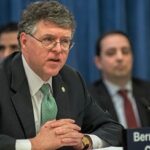 That line was delivered by Joseph A. Rosenthal, principal attorney at Connecticut’s Office of Consumer Counsel, during a discussion Thursday on the status electricity grid modernization efforts in his state and several others.  It was a part of a day-and-a-half National Regulatory Conference and William and Mary’s law school which had several nominal topics but was really about carbon regulation.

There was a final panel Friday about carbon regulation, with a focus on Virginia’s stalled efforts to join the Regional Greenhouse Gas Initiative (RGGI). The November election will decide that.  But even the first panel discussion, on the growing use of state subsidies to override the carbon-blind PJM Interconnect LLC’s capacity marketplace, turned out to be about carbon regulation.

The growing practice of state-level decisions to subsidize nuclear, create renewable portfolio standards or mandate specific energy sources such as major off-shore wind projects is playing havoc with PJM’s systems. Frederick Bresler of PJM gave the capacity markets (which are distinct from the market for energy) some credit for the huge drop in regional wholesale prices, and defended their continuing utility.  The capacity market is about generation availability.  Assets locked up in their states are not freely available.

Glen Thomas of GT Power Group and a former Pennsylvania commissioner, said Pennsylvania, a retail choice market, doesn’t even do a regulated integrated resource plan and depends on PJM’s capacity market to send the right signals about generation needs. But New Jersey and Maryland next door have a series of subsidies and mandates tilting the field.  He called it “the worst of all possible worlds,” adding: “What I will dispute is whether states understand what they are doing.”

Subsidies for nuclear are a growing part of this.  Rosenthal, from Connecticut, told Bacon’s Rebellion he does know just how much Connecticut consumers will be paying to Dominion Energy in the new power purchase agreement that saves the Millstone nuclear plant from closing.  He could not discuss it.  The PPA price is, of course, confidential.  Isn’t that always the way?

Then the other side chimed in: “What some may be calling subsidies may also be called compensation for clean attributes,” said Michael Richards of the Maryland Public Service Corporation.  His citizens are expecting and demanding zero carbon energy at a low price, but “are willing and in fact are paying the premium.”  To Marylanders, he said at another point, all electrons are not equal.  The laws of physics end north of the Potomac?

Carbon concerns drove the next discussion on the future of electric vehicles, not surprisingly.  But then we learned the role of grid modification for many advocates is to enable time of day pricing to better mesh with solar generation and electric vehicles, or to allow distributed generation from whatever renewable power source a customer or group of customers wants.  (Nobody is putting combined cycle gas turbines in their garages.)  So, grid mod equals carbon regulation, too.

Finally, carbon regulation was the unrecognized elephant in the room as the newest member of the Federal Energy Regulatory Commission (FERC), the Honorable Bernard McNamee, gave a very judicious talk Friday where he avoided the interesting issues active before that crucial regulatory agency (think two pipelines).  Not making news was his goal, he admitted later to Bacon’s Rebellion.

He won a party-line vote Senate confirmation in late 2018 after much criticism that he lacked abiding hatred for oil and gas.  Soon after he got there the logjam broke at FERC on some pending natural gas export facilities, and he expressed a basic preference Thursday that “markets are the best way to allocate resources.”

He stayed away from controversy Friday but mentioned a bit of history.  He went back 42 years to President Jimmy Carter’s April 1977 speech (Jeremiad as I recall it) on energy challenges following continued shortages.   Carter told the nation oil and gas were “simply running out” and “we would use up all proven reserves in the next decade.”   Congress went on to pass a law discouraging natural gas and encouraging more coal for electricity generation.  That was then and things have changed, McNamee pointed out.

Just because the environmentalists don’t win every vote doesn’t mean they aren’t winning overall.  These were five presentations all flowing back to their favorite topic. (I did skip the legal ethics lecture – a feature of all bar events — and the cocktail party, so no idea how they went.  The room does fill up with CO2 at a good party.)

These useful discussions were accompanied by a two-inch binder it will take weeks to read. The State Corporate Commission and the energy law groups combine to plan and sponsor the annual event (this was number 37), with the 160 attendees including lawyers from the firms who do these deals and cases, utility company executives, regulators from Virginia and other states and some lobbyists. The amity and humor displayed within the community (plenty of revolving doors) takes the edge off the sharp elbows thrown in court and at the General Assembly.

In fact, a review of the attendee list reveals that no legislator, legislative aide or legislative policy staff person attended. (Correction!  There was a staff attorney from legislative services there! But not a legislator or legislative aide.) That just says it all, doesn’t it?  The various folks shaping up to do battle over Virginia’s energy regulatory structure, again, were also mostly absent, as were those who will vote on it. Do they prefer ignorance? All of these discussions left me, despite my many objections to Virginia’s current situation, very reluctant to just charge ahead blindly to rewrite the rules, to copy this other state or that, even the Great State of Texas. That’s another column.

This entry was posted in Energy, Environment, Regulation and tagged Stephen D. Haner. Bookmark the permalink.