The Political Economy of Dental Care 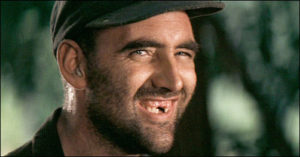 The bad teeth guy in the movie “Deliverance”

No sooner has Virginia enacted one vast new entitlement, Medicaid expansion, than the drumbeat begins on the next. No matter how much money government dedicates to health care, food, housing, education, transportation, legal aid, or whatever, there is always someone who is getting the short end of the stick by comparison. Always. And the answer is always the same: Expand entitlements. Always.

The latest case in point is an article in the Virginia Mercury highlighting the deficiencies in dental care experienced by hundreds of thousands of Virginians — a dental gap bigger than void in the bad-teeth guy’s mouth above. No question, the problem is a real one. Dental care costs too much for poor and working-class Virginians to afford, assuming dental care is even available in under-served rural areas. And the consequences of poor dental hygiene can lead to serious medical complications.

For years, advocates, such as the Virginia Oral Health Coalition have pushed the state to add a dental benefit for adults. So far, Virginia has expanded dental benefits to pregnant women and children until they turn 20.

As of the start of this year, 17 states offered extensive dental benefits — including preventive and restorative procedures — to their Medicaid populations, according to the Center for Health Care Strategies, a group that advocates for improved health care delivery for low-income Americans.

A benefit, advocates argue, would make a major difference for the 1.2 million adults covered in the state’s Medicaid program.

Creating the entitlement in Virginia would cost between $24.4 to $60.8 million, O’Connor says.

Of course, you’d expect from an alliance representing the dental profession to advocate a new entitlement that creates more business for the dental profession. It should surprise no one that the proffered solution to the problem entails transferring money from taxpayers to dentists.

Here’s a different idea. Expand the supply of dentists and dental technicians. How? Maybe start by reducing the total cost of attendance at the Virginia Commonwealth University School of Dentistry, which now runs about $133,000 to $140,000 per year over four years. Nationally, dentists graduating in 2016 carried on average $261,149 in debt, according to the American Dental Education Association. That number could well be higher in Virginia where the tuition runs considerably higher than the national average.

I don’t know why the VCU dental school is so expensive. I conjecture that the tuition bears little relationship to the cost of actually providing the education, and that someone high in the VCU hierarchy has made the calculation that the university will charge what the market will bear. I further conjecture that the School of Dentistry is a lucrative profit center, which VCU is milking for revenue to subsidize other programs. I may be entirely wrong, but when tuition is higher than almost anywhere else in the country, that’s a proposition worth looking into.

Now, if you entered a profession that took you four years to complete (which means four years of earning no money) and cost you roughly $500,000 in tuition, fees, room, board and expenses, leaving you $260,000 in debt when you graduated, would you want to move to Southwest Virginia where there is a paucity of patients capable of paying charges sufficient to help you retire your loans? No, unless you’re incredibly idealistic and willing to live at the foot of the cross, you’ll move to the suburbs where you can make $150,000 a year and pay off your debts.

Let me venture another hypothesis, which any enterprising reporter could verify or falsify: Given the sky-high cost of tuition, Virginia dentists have exercised their clout through Virginia’s professional licensing system to restrict competition from allied professions, such as dental technicians. I would conjecture that dental technicians, like nurses, are seriously circumscribed in what they can do or the circumstances in which they can practice.

Dental technicians earn about one-fifth of what dentists earn. Yet in my personal experience, dental technicians do 30 or 40 minutes of work cleaning teeth and taking x-rays while my dentist spends about 5 minutes checking things over. I love my dentist — he’s a great guy, and I’ve been using him for 30 years. But I’ve really got to wonder why it costs me $200 a visit when dental technicians are paid (on average) about $35,000 a year or the equivalent (taking benefits into account) of maybe $30 an hour.

I’m betting that (1) dentists exercise a strangle hold on the ability of dental technicians to provide independent teeth cleaning services, and (2)bill for technician’s services at a rate that many would consider obscene. Perhaps such practices, if in fact they occur, are justifiable in areas with no shortage of dental practitioners. But are they justifiable in areas that can’t attract dentists? Would it not be better to provide access to dental technicians to maintain dental hygiene at lower prices and make referrals as needed to dentists to fill cavities and perform other more advanced procedures?

I have no expertise whatsoever in the practice of dentistry, and I fully concede that I may be making some naive statements here. But I am convinced that we need to look differently at the problem. Instead of asking whether we should expand entitlements, perhaps we should be looking at how to expand supply and bring down costs.

This entry was posted in Health Care, Poverty & income gap and tagged James A. Bacon. Bookmark the permalink.