The Failure of University Governance 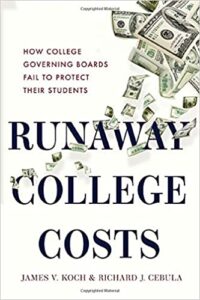 In his new book co-authored with Richard J. Cebula, “Runaway College Costs,” James V. Koch goes beyond the usual lamentations about how out-of-control  costs are making colleges and universities increasingly unaffordable and inaccessible to millions of Americans. He describes how higher-ed governing boards have largely failed in their fiduciary duty to students to curtail the expensive ambitions of college administrators.

As alumni revolts gain momentum at the University of Virginia and Washington & Lee University, disgruntled graduates seeking to tame the politically correct enthusiasms of the current regimes would do well to read this book. It provides the best overview of higher-ed governance issues I have seen anywhere. If conservative alumni hope to exert influence on the direction their alma maters are going, they need to understand who holds power in the modern university and how they wield it.

Koch starts with the observation that the vast majority of college and university boards of visitors act as rubber stamps for spending and tuition proposals submitted by their institutions’ presidents. Dissenting voices are rare, and unanimous votes are the norm. Costs and tuition have increased relentlessly over the years because governing boards have allowed them to.

Koch, a former president of Old Dominion University who speaks from first-hand experience, describes how presidents manipulate boards through flattery, wining and dining, the dispensation of small favors such as football tickets, and above all the framing of issues and presentation of information. Universities are complex institutions, and it can take years for board members to understand them well enough to ask informed questions. And in the rare instances in which board members do challenge administrators, they are often shamed into silence.

But the problem runs even deeper. Few states have clearly articulated what their public colleges and universities are supposed to do. Teach undergraduates? Conduct research? Perform public service? And to what ends? To mold minds? To prepare students for jobs? To push back the frontiers of knowledge? To change society? To broaden opportunity? Often these goals conflict.

Priorities are set through the interaction of administrators, faculty, boards, politicians, students and parents. Koch draws a distinction between permanent interests and transient interests. Faculty and administrators have career-long interests in policy outcomes. By contrast the interest of students and families, and to a lesser degree politicians and board members, is more peripheral and shorter in duration.

“The interests of these long-term participants come to dominate as the years pass,” Koch writes. “It is a sophisticated form of regulatory capture — that is, the  takeover of a regulatory body by the very groups that it is supposed to be regulating. … Most faculty governance groups typically are interested in enrolling students with higher test scores; they advocate higher salaries and generous, fully funded fringe benefits; they support improved, up-to-date classrooms and laboratories; and they plump for more time for research.”

Although Koch does not mention the point, faculty and administrators also are driven by ideology. The prevailing ethos on college campuses ranges from moderate liberal to extreme leftist. As permanent interest groups, faculty and staff have the power to transform campus culture over the long term. The result is that the values that prevail on campuses are very different from the values in wider society. At UVa and W&L, alumni are trying to organize themselves as counterweights with long-term staying power. Such alumni rebellions are exceedingly rare, however, and it is too early to tell how successful they will be.

Koch argues that board members have a fiduciary relationship to students, in other words that they are obligated to act in the best interest of students. He goes as far as to suggest that every state adopt legislation that “unambiguously establishes a fiduciary relationship between governing boards on the one hand and citizens and students on the other hand.” As a corollary, he says states should clarify their expectations for what public higher-ed should strive to accomplish and how to measure institutional performance.

Given his background in Virginia higher-ed, Koch alludes frequently in the book to Virginia. He writes:

The Commonwealth of Virginia says little about the missions of its four-year institutions. The Virginia Constitution says merely, “The General Assembly may provide for the establishment, maintenance and operation of educational institutions which are desirable for the intellectual, cultural and occupational development of the people of this Commonwealth.”

This lack of detail constitutes license for Virginia’s four-year public campuses to do nearly anything that intrigues their ambitious administrators, faculty, and trustees, so long as they can fund it Virginia provides no guidance to its public university board members concerning what it means to have either a defined institutional mission or a fiduciary relationship to citizens and students.

Koch discusses the varied ways around the country in which higher-ed board members are selected. Like many states, Virginia gives its governor the power to appoint board members. Inevitably, appointments become rewards for political support and/or campaign contributions.

How does this work in the real world? The University of Virginia (UVA) provides a representative example. Over the past decade, UVA has been the scene of several board squabbles and an aborted sacking of a sitting president. Thus, board membership has been demanding. The UVA campus newspaper reported that ten of twelve voting members of the UVA board who were Virginians had made financial contributions to the political party of the governor, while only three had contributed to the other party. This is the way of the world and describes nearly every state, irrespective of which political party is in power.

Koch argues that new board members should undergo elementary training on their responsibilities to students and the public, and to gain some familiarity with major issues such as new technologies, demographic trends, teaching loads, space usage, sources of funding, mission creep, intercollegiate athletics, auxiliary enterprises, and the role of foundations and fund raising.

Under the spell of charismatic college presidents, who carefully orchestrate the board outcomes they want, most trustees buy into the narratives about what the institution is, how well it is managed, and what it is attempting to accomplish. Trustees (or “visitors”) should not endeavor to micro-manage their institutions. Instead, Koch suggests, they should develop their own performance metrics, in particular of educational value added. How much are students actually learning? “They should be wary of measures that do little more than repackage and rescale standardized entrance test scores and parental incomes.”

Koch argues that effective governance requires that the interests of presidents, administrators and faculty should be aligned with those of the students. Presidents and senior administrators tend to be more preoccupied with their remuneration and the prestige of the institution (which reflects well on them) than affordability and access. But basing bonuses and other incentives on naive measures can be a tricky business. Often these metrics can be easily gamed. “One should not underestimate,” Koch writes, “how [presidents’] fertile imaginations can over time render numeric goals meaningless.”

It has been interesting to watch the UVa and W&L alumni in action. They organized in reaction to what they regard as the trashing of valued traditions. Intuitively, they know they exercise power through their ability to give or withhold contributions. At UVa, the alumni unquestionably have caught the ear of President Jim Ryan and Rector James Murray. But most activists are new to the business of campus politics, and they’re still finding their way. For the most part their demands have been narrow — save the Jefferson statue, take down the “F— UVA” sign on the lawn, and the like. Some alumni have broached broader themes such as preserving intellectual diversity, but no one has presented clear ideas for how such a goal would be implemented.

Alumni have the potential to become a major force in university power structures. To be effective over the long run, they need to change the governance structure. “Runaway College Costs” will give them a valuable primer.

There are currently no comments highlighted.
This entry was posted in Education (higher ed), Governance, Uncategorized and tagged James A. Bacon. Bookmark the permalink.

19 responses to “The Failure of University Governance”