The Coming Push for Electric Vehicles in Virginia 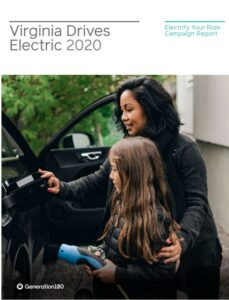 Now that Virginia is committed to a 100% renewable electric grid by 2050, the push is on to decarbonize the transportation sector. In a word, that means persuading Virginians to switch from cars with internal combustion engines to electric vehicles (EVs). In an early sign of what’s to come, a Charlottesville-based group, Generation180, has published a report detailing policies needed to encourage widespread adoption of EVs in the Old Dominion, “Virginia Drives Electric 2020.”

There is much good that can be said of electric vehicles. They have lower fuel prices and maintenance costs. Generation180 says the cost is $6,000 to $10,000 cheaper over the car’s lifetime. If that were accurate, I would expect to see more than 24,000 EVs on Virginia’s roads. Still, I buy the argument that the cost is increasingly competitive. Moreover, there is the social benefit from reduced pollution and lower CO2 emissions. I suspect those numbers are hyped and exaggerated, but clearly there is some benefit. All things considered, I think EVs are a great idea. But let’s not suspend our rational faculties when discussing them.

Generation180 has identified barriers in Virginia to rapid EV adoption. One is the shortage of inventory in automobile dealership showrooms. “We found 1,347 new and used electric vehicles in Virginia, compared to 2,399 in Maryland. In other words, inventory was 44 percent lower in the Virginia cities than in the comparable cities in Maryland.”

The report advocates the following measures to promote EV ownership:

There you have it — that’s what the green social engineers have planned next for us. They don’t want to create a level playing field for EVs, they want to tilt the field.

Now, for one moment, let us imagine a future 30 years from now when Virginia has a 100% renewable electric grid and a 100% EV fleet. We’re living in CO2 nirvana, doing our fair share to combat climate change. But we’re more dependent upon the electric grid than ever — not just for heating and cooling, running our appliances, and charging our iPhones and PCs but for locomotion.

In an ideal world, the automobile batteries in every garage will interact with the electric grid to help manage the hour-to-hour variations in electrical supply and demand — a good thing. But you don’t built reliability into the electric grid sufficient to manage hour-to-hour changes in supply and demand, or even day-to-day changes, or even seasonal changes. You build an electric grid resilient enough to survive extreme weather events that occur every two, three or four years — events in which clouds block out the solar panels, and/or strong winds take wind turbines offline, and/or extreme temperatures create massive surges in electric load for three or four days at a time. If the system fails in all-EV world, the consequences are even worse than if it fails today.

If we go this route, we need to build an electric grid that is robust enough to survive the rare-case scenario. I just don’t see the environmental groups giving any attention to what such a grid would look like or how much it would cost to build. It’s an afterthought — we’ll cross that bridge when we get to it. That philosophy isn’t working for California, however, and it won’t work any better for Virginia.