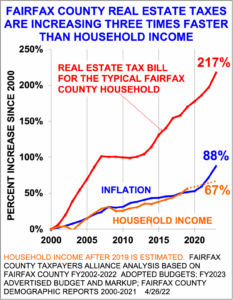 Combining real estate and personal property tax increases, the typical household will have a $634, or 8.4% tax increase. This is the largest increase since Gerry Connolly’s 9.7% increase in 2006, at the end of the housing bubble. (When he was county chairman, Congressman Connolly increased taxes 15% in 2003, which makes him the record holder for the largest tax increase since 1982.)

However, if you read county chairman Jeff McKay’s April 26, 2022, newsletter about next year’s budget, you’d think your taxes are going down.

Virginia Code Section 58.1-3321 requires supervisors to compare the new rate of $1.11 not to the current $1.14 rate but to a lower rate that would offset the increase in assessments. For homeowners, that “lowered” rate is $1.04. Chairman McKay ignores the Virginia Code.

Also, Chairman McKay left out the storm water tax, which is also based on assessments. The storm water rate is 3 ¼ cents, so the total real estate tax rate is $1.14 ¼ cents, and not $1.11.

Second, Chairman McKay says, “The Board also agreed to a 15% reduction in the assessment of personal property (car) tax.…” However, used car values have increased so much that even with this 15% “reduction,” the typical household’s car tax bill will increase 36%.

Under compensation, Chairman McKay says all county employees are getting 4% raises. However, the supervisors’ budget package states that there will be “… average pay increases of 7.86 percent for uniformed public safety employees and 6.16 percent for non-uniformed employee.…”

All told, county revenue increases next year total $246 million. The total cost of raises and rate hikes for benefits for the county and schools (school employees are also getting 6% raises) is $252 million. So, the quarter-of-a-billion-dollar tax hike is all for raises and benefits.

Chairman McKay’s newsletter does not mention this. Instead, he says, “In total, this budget provides $199.4 million in tax relief.” 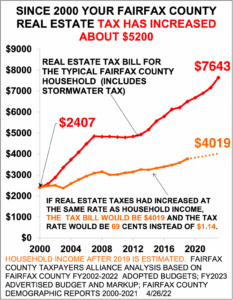 This is taxation by misrepresentation.

What McKay means is that the supervisors were thinking of raising taxes and other revenues by $445 million, but instead they  raised taxes and revenues only $246 million.

Suppose Chairman McKay had said that the supervisors effectively raised the real estate tax rate 7 cents rather than decreasing it 3 cents; that the rate is actually $1.14, not $1.11; that the car tax is going up 36%, not down 15%, that county employees are getting raises of 6% and 7%, not 4%, and that county revenues are increasing $246 million to pay for the raises and not going down by $199 million.

Would that jeopardize Chairman McKay’s reelection next year?

Arthur G. Purves is president of the Fairfax County Taxpayers Alliance. This column is republished with permission from the FCTA’s Bulletin.

This entry was posted in Taxes and tagged Arthur Purves. Bookmark the permalink.