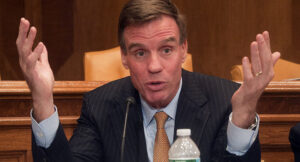 Since the tragic death of George Floyd on May 25, 2020 at the hands of a police officer, there have been thousands of (mostly peaceful) demonstrations and hundreds of riots and civil disturbances in towns and cities across the United States. Some took place in Richmond, Virginia Beach, Portsmouth, Fredericksburg and other Virginia jurisdictions.

Senator Mark Warner, D-VA, issued over 200 press releases between May 25, 2020 and October 22, 2020, covering a wide variety of issues and topics. The releases tell Virginians what he thinks about a wide range of legislation, government activities, issues, and events. But they leave Virginians in the dark about how he sees the many violent civil disturbances that have roiled America.

Since the death of George Floyd, the senator has issued four press releases relating to the civil unrest:

Warner also issued a June 8, 2020, press release about joining other senators in introducing the Justice in Policing Act of 2020. Although that document refers to the death of George Floyd and concerns about police brutality, it does not discuss any of the riots or civil disturbances that followed Floyd’s death.

Significantly, since May 25, 2020, Warner has not issued press releases on:

Warner was moved to issue a September 8, 2020 press release about joining other Senators to condemn violence — in Cameroon, a country in Africa — but not one condemning violence in Virginia.

Before they enter the voting booth (or send their mail-in ballots), Virginia citizens should ask themselves…

What does Warner think about the wave of riots and violent civil disturbances in the US this year?

Why is violence in Cameroon is worth addressing but riots and civil unrest in Virginia and the U.S. are not?

Why has the senator been so silent? Is he too weary from the travails of his 2020 re-election campaign to focus on the wave of riots and civil unrest in America? Is he worried about upsetting voters if he speaks his mind?

Upon pondering Warner’s silence on riots and civil unrest, citizens might legitimately wonder if he is he is living up to his responsibilities as Virginia’s senior senator.

Emilio Jaksetic, a retired lawyer, is a Fairfax County Republican.

This entry was posted in Crime , corrections and law enforcement, Culture wars and tagged Guest contributors. Bookmark the permalink.